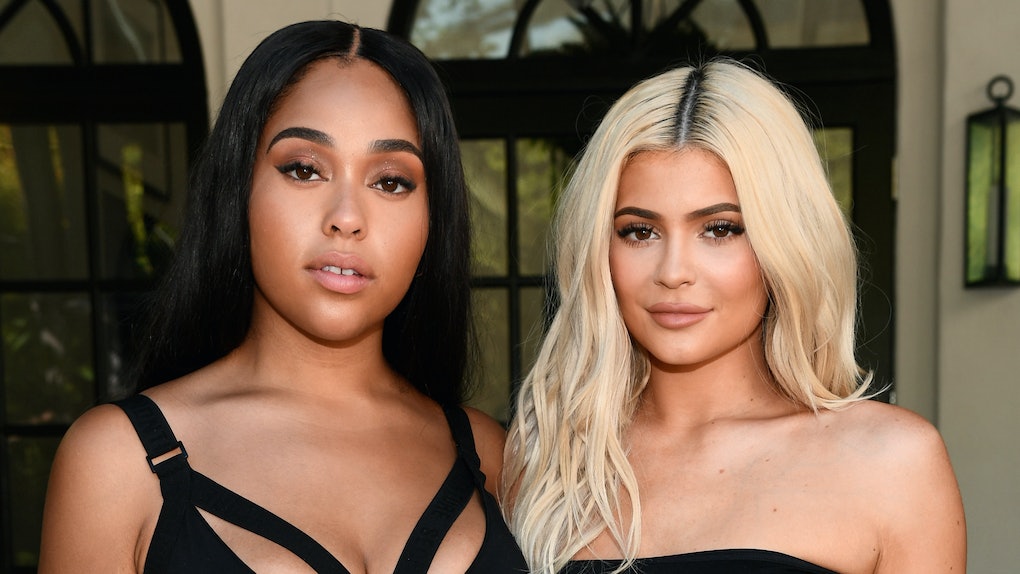 Um... there's a bit of drama going on in the Kardashian world. On Feb. 19, it was reported by TMZ that Khloé Kardashian and Tristan Thompson have officially broken up, reportedly because he cheated again. The most mind-blowing part is that he reportedly cheated with Jordyn Woods. Yes, as in Kylie Jenner's best friend Jordyn Woods. Elite Daily reached out to Kardashian, Thompson, and Woods' teams for comment on the breakup and cheating rumors, but did not hear back by the time of publication. Khloé Kardashian has posted some comments on Instagram that make it seem like she believes the rumors are true, but how is Kylie Jenner feeling about all of this? Kylie Jenner's reported reaction to Tristan Thompson and Jordyn Woods' cheating rumors shows how complicated this entire situation is.

According to TMZ, this whole thing has thrown Jenner for a loop. (She has not yet made any public comments, however.) At first, she was reportedly in denial about the possibility that Woods betrayed their family in such a way. Woods has been close to the Kardashian/Jenner family for years, with her appearing on early seasons of Keeping Up With The Kardashians when she, Kylie, and Kendall Jenner were still teenagers, and co-starring in Life of Kylie with Jenner. She lived with Jenner in her guest house with Stormi for months, she has modeled for Kardashian's Good American line, and she's even referred to as one of Stormi's aunties. But now, Jenner reportedly doesn't know if their friendship is "worth saving." Honestly, I don't blame her if the rumors turn out to be true.

Kardashian reportedly learned about this on Monday, Feb. 18, and broke things off with Thompson immediately. The whole reason Thompson was in L.A. this weekend was reportedly to spend Valentine's Day with Kardashian and True, so if true, this dude really has some damn impeccable timing. Remember when Thompson cheated on Kardashian just days before she gave birth to their daughter?!

Thompson reportedly initially denied the reports by tweeting "FAKE NEWS" on Feb. 19, according to E! News, but the tweet has since been deleted. Woods has not yet made any public comments.

TMZ's report claims that Jenner was in denial about the news at first, but then reportedly got in contact with people who were at the alleged party and is now convinced the rumors are true. The outlet also reports that the rest of the Kardashian family isn't surprised Thompson cheated again. Although I'm sure they never expected Jordyn Woods to help cause such a heartbreak.

According to E! News, Jenner "is very torn on how to handle the situation." Understandably freaking so. This is a damn nightmarish mess! Elite Daily reached out to Jenner's team for comment on the report, but did not hear back by the time of publication.

On Feb. 18, just one day before the reports of Thompson and Kardashian's breakup surfaced, Jenner and Woods were hanging out at Jenner's house.

Jenner posted a video to her Snapchat story on Feb. 18 that showed her using the puppy face filter, then she turned the camera around to show Woods. This was seemingly posted before Jenner learned of Woods' reported betrayal, as the family reportedly learned of Thompson and Woods' reported hookup the same day.

A source told E! News that "Khloé is more disappointed that someone so close to their family would betray her. She can't believe it."

A second source told the outlet that Thompson reportedly denied the rumors when pressed about it by Kardashian, but she didn't buy it.

"She heard it from multiple people and doesn't believe him for a second," the source said. "She is angry more than she is sad. And she's shocked Jordyn would do this. Of all the guys in the world, she can't fathom why Jordyn would make a decision like this." Girl, same!!

More like this
Is Saweetie's "See Saw" About Quavo? The Lyrics Are Brutal
By Corinne Sullivan
Here's Where Colton Underwood & Cassie Randolph Stand After He Came Out On 'GMA'
By Corinne Sullivan
Alex Rodriguez's Instagram Story About Jennifer Lopez Before Their Breakup Is Gut-Wrenching
By Hannah Orenstein
Stay up to date