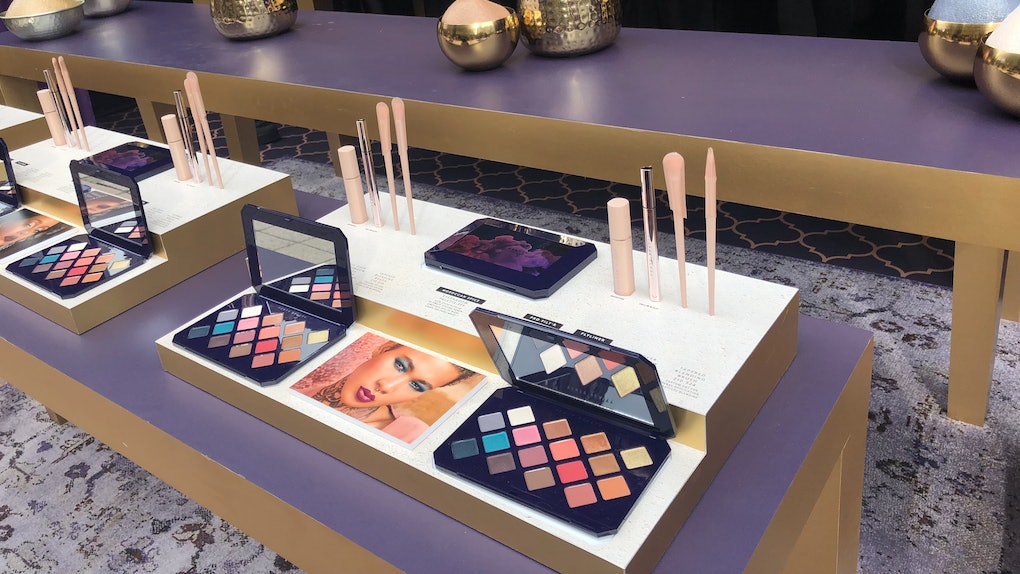 What Does The Fenty Beauty Pop-Up Shop Look Like? I Got To Experience The Hype IRL

New York City truly has it all. Skyscrapers, waterfront views, the Statue of Liberty, a Rihanna-inspired Morrocan spice market... OK, that last one may be temporary, but it's here nonetheless, and totally fabulous at that! If you're wondering what the Fenty Beauty Pop-Up Shop is like, you're in luck, because the makeup wonderland opens to the public today, June 27. In fact, I was lucky enough to head over for a little preview beforehand to swatch, selfie, and more.

In celebration of the newly announced Moroccan Spice Collection, available July 6, the Fenty Beauty Pop-Up will take place from June 27 through June 29, from 11 a.m. ET to 7 p.m. ET each day, in three different locations across New York City. The June 27 pop-up sets up shop outside of The Pennsy, and on June 28, it relocates to Pearl Street Triangle. On June 29, it holds its last official day in the Seaport District.

Here's a peek at what the inside looks like:

Full disclosure: I've never been to an authentic Moroccan spice market, but this pop-up had me feeling totally transported into a whole new world. Keep in mind, The Pennsy is in front of Madison Square Garden and above Penn Station. Setting up shop in one of the busiest areas in the entire city is a major power move, so I'm not surprised it was Rihanna's first choice.

Underneath a large poster of RiRi smizing, a trio of three purple tents adorned with gold accents housed the bulk of the event. Golden spice bowls held lumps of faux "spices" in shades from the palette. The floors were a purple and gold quatrefoil-esque pattern and layered with vintage-inspired purple rugs. I also noticed that Drake was a constant within the blaring playlist, which led me to wonder if he and Rihanna are friends again. I know you're here to see the makeup, but I'm trying to set the scene, so stay with me.

Across from the tents, a super-sized Moroccan Spice Palette served as the ultimate photo backdrop, which I did, in fact, pose in front of, for research purposes. Yes, I'm wearing a utility jumpsuit, because when I got dressed that morning, I asked myself what Rihanna might wear, and it turns out, I didn't have too many options that fit the bill. I digress.

Across from the photo area was a full-blown hookah lounge. It's Rihanna's event, after all. At this point, I've already concluded that this pop-up is more lavish than my future wedding would ever be, so I am intent on enjoying every second. With this in mind, I entered the tents to check out the new releases.

Before I gush about the Moroccan Spice Collection, you should know that almost all of Fenty's products are available to swatch and purchase at the pop-up, not just the new releases. For the face, this includes everything from the Pro Filt'r Soft Matte Longwear Foundation ($34, fentybeauty.com) and Instant Retouch Primer ($32, fentybeauty.com) to the Match Stix ($25, fentybeauty.com) for concealing, contouring, and highlighting, and all of the Fenty brushes and tools.

One thing I really enjoyed was that they thought to include a shade-matching pinwheel for all 40 foundation shades, as well as makeup artists in cute Fenty tees ready to answer any questions. Personally, I'm willing to coat my arms in swatches to get it right, but I know that's not for everyone, so this tool will no doubt be helpful for shoppers when things get crowded later in the day.

Speaking of covering my arms in swatches, are you ready to see the crown jewel of the collection? Behold, the sexy, luxe Moroccan Spice Eyeshadow Palette ($59, fentybeauty.com).

The entire Moroccan Spice Collection is focused around the eyes, since the original Fenty launch featured mostly products for the skin. The palette's packaging is slim but substantial, similar to the original Galaxy Eyeshadow Palette ($59, fentybeauty.com), but the color story is totally unique. The top row features the creamiest of shimmer shades, soft to the touch with just the slightest bit of fallout, but pigmented enough to justify tapping off your brush before use. When swatched on my arm, the mattes weren't as smooth, but after I tried applying them using a brush, I found them to be buildable and blendable. While the arm swatches are important, it's really all about how these shades look on the eyes, right?

Lots of the shades are spice-inspired Earth tones, featuring names like "Cumin Get It," "Saffron," and "Spice Trip." Others are rich jewel tones, like the un-dupeable blue "Evil Genie." I'd also like to take a moment to note that the top right shadow is named "Marrakush." Whether or not you love the shades, you can't fight me on the fact that Fenty has some of the best product names out there. In fact, possibly the best.

Along with the palette, the collection features the Flyliner Longwear Liquid Eyeliner in the shade "Cuz I'm Black" ($20, fentybeauty.com) and the Pro Filt'r Amplifying Eye Primer in the shade "Invisipink" ($22, fentybeauty.com). It was about time Fenty put out a liner, and this one does not disappoint. The super-flexible tip was perfect for drawing thin and thick lines and tracing the curves of the eye. Although I detected a touch of spreading on my swatch, the line dried down almost instantly, and I had trouble removing it later.

The primer had a large applicator, perfect for spreading product onto the eyes, and blended out like a dream to a practically transparent finish. I found the lightweight, smooth texture similar to that of the full-face Pro Filt'r Primer, and given the eyeshadow palette's statement shades, the primer seems like the perfect addition to the collection. I'd recommend picking it up if you do choose to splurge on the palette.

While I perused the products, I had a chance to speak with Hector Espinal, Fenty's Global Makeup Artist, who couldn't be more thrilled about the Moroccan Spice Collection. He gushed about the variety of finishes — five! — and versatility of the shades in the eyeshadow palette, which he claims range from "mild to spicy to spicy as f*ck, like Rihanna would say." Amen to that.

When I ask how Morocco became the theme for the new collection, Espinal tells me that it was inspired by Rihanna's passion for the location's luxurious aesthetic. "She's always on the road, and this is just one of the places where she really loves the culture, the textures, and colors," he says. "She really wanted to embody that and bring everyone on this journey of what she really loves about Morocco." RiRi definitely succeeded in bringing the whole beauty pop-up/spice market crossover vibes, so major kudos to her.

To finish off my pop-up exploration, I headed to the tents where the makeup artists were giving mini-makeovers using the new goods. MUA Francisco Catedral dolled me up using shades "Casablanca" and "Henna Sea" from the new palette, and finished off with a touch of Flyliner. He added a pop of glow with the Killawatt Freestyle Highlighter in the shade "Lightning Dust/Fire Crystal" ($34, fentybeauty.com), and finished off with the Gloss Bomb ($18, fentybeauty.com) on my lips. The ring lights suspended from the tent were super flattering for the skin, so I was snapping pics left and right. When I asked Catedral about the black ink on one of his hands, he admitted it was the Flyliner from the day before. Yes, it's so long-wearing that he had trouble removing it! Consider it MUA-approved, in addition to already being Rihanna-approved.

After a final loop around the pop-up, I decided to head out just as the general public came in to shop around. The line was already down the street and around the corner, and the first group in was beyond elated, snapping photos by the hookah lounge and lining up to get their makeup done.

If you've got the chance to stop by for the remaining dates of the shop, I definitely recommend doing so, and if not, you can still shop the collection on July 6 in Sephora stores and online on the Fenty Beauty site, Harvey Nichols, and Sephora.com.

More like this
How To Watch YouTube's 2021 Beauty Festival With Addison Rae, SkincareByHyram, & More
By Margaret Blatz
These Stick-On Face Jewels, Gems, & Nail Art Are Coming For Your Selfies
By Margaret Blatz
When Does Zara Beauty Launch? The Fashion Retailer's Beauty Brand Is Coming Soon
By Margaret Blatz
Stay up to date