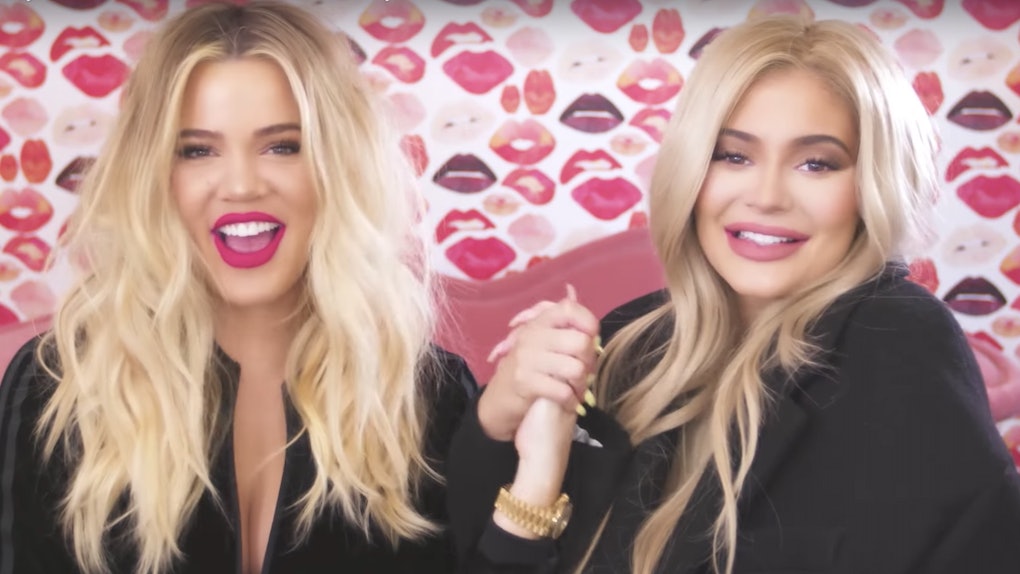 Kylie Jenner and Khloé Kardashian are trying their hands at being trolls, and it's honestly so rude. The pair recently got together to do a semi-tutorial of Khloé's products from her collaboration with Kylie Cosmetics. The whole video is them trying on the various lipsticks they worked on together, talking about the inspiration behind the names of the products and why they love them so much. But then, then, near the end, Kylie Jenner and Khloé Kardashian make a baby joke, saying they have "so many babies" together (meaning their lipsticks), and I've never felt so trolled in my goddamn life.

Kardashian says about the lipsticks, "We created them. It’s our baby together, we have eight!” And Jenner responds, “We have so many babies, who knew?" Then they laughed as if they have a secret they're not telling us, and I honestly want to flip a table. You know what you're doing with that line, Kylie!!! This secret I speak of is the rumor that Jenner and Kardashian are reportedly pregnant with their first children. If you haven't heard of that by now, bless you and your pure life free of Kardashian drama.

Can you take me in? Can you teach me your ways? Because this video of Kylie Jenner and Khloé Kardashian talking about having "so many babies" shouldn't stress me out as much as it does.

Did you see that blasphemy at the end? They know they're messing with us. I'm not hurt, Kylie and Khloé, I'm just disappointed.

Fans can't handle this level of trolling from the sisters.

The rumors of Jenner and Kardashian's respective pregnancies have been insane ever since they started. They first started on Friday, Sept. 22, when TMZ reported that Jenner is allegedly pregnant with Travis Scott's child. The pair have been together for a little less than a year. A couple of days later, news broke that Khloé Kardashian is reportedly pregnant with her first child with boyfriend Tristan Thompson. Kardashian apparently basically lives at Thompson's house in Cleveland, where he plays the sportsball (basketball).

Neither Jenner nor Kardashian has confirmed either of their respective pregnancies. The only confirmed Kardashian baby on the way is Kim Kardashian's, reportedly via surrogate. In a trailer for the current season of Keeping Up With The Kardashians, Kim revealed to Khloé she and husband Kanye West are expecting their third child. Although she didn't confirm whether or not they're having the baby via surrogate, sources close to the family say they have hired a surrogate and are excited to be having another baby on the way. InStyle reported two weeks ago that Kourtney Kardashian was reportedly pregnant with her first child with boyfriend Younes Bendjima, but Kourtney shot down those rumors yesterday in two tweets. In the tweets, she said, "I see online that I said I was pregnant in an interview, but that was completely taken out of context." She added, "The interviewer asked me 'What's a crazy rumor that you've heard about yourself?' and my answer was... 'I've heard that I am pregnant.'"

So there you have it: Kim Kardashian has one baby on the way reportedly via surrogate (not twins), and Kourtney Kardashian is not pregnant. Now if Kylie Jenner and Khloé Kardashian would just freaking tell us if they're pregnant or not that would be great.

People think Kim Kardashian hinted she, Kylie, and Khloé were all expecting babies in an Instagram she posted on Sept. 3.

The picture was of her, Kylie, and Khloé all sitting by a pool with a caption that read, "The 3 of us..." The three of us are what, Kimberly? Very tan? Wearing great bathing suits? Love each other very much? Are thinking about switching their car insurance to Geico? WHAT ABOUT THE THREE OF YOU?! Ugh, this is all so confusing. And Kylie and Khloé joking around saying they have ~so many babies~ is really not helping. Just tell us already!! (Just kidding, please just tell us in your own time.)