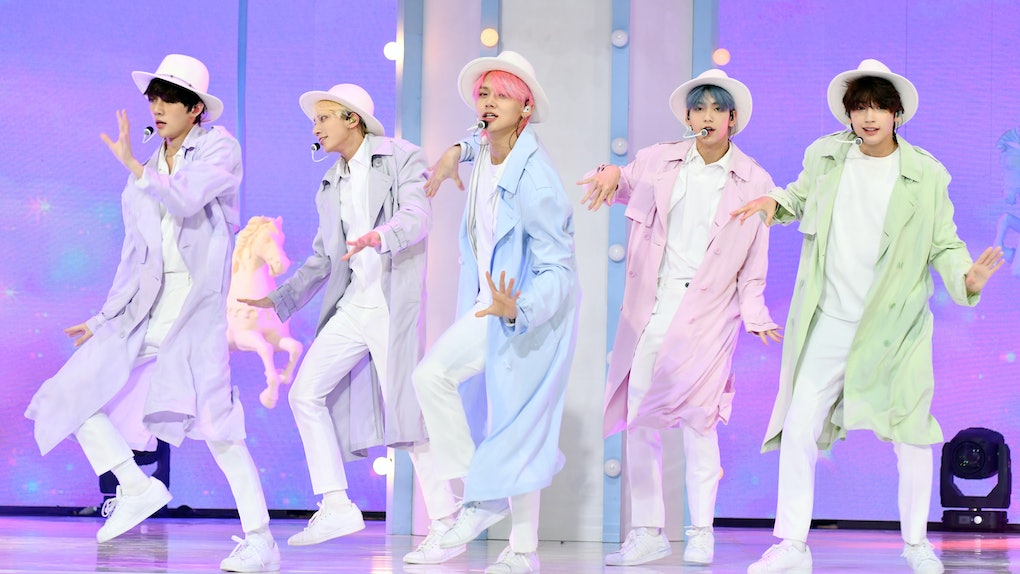 Whether you're relatively new to the TXT fandom, or the biggest MOA of your friend group, there's something about the quintet that feels incredibly intimate. If you take a look at each member's astrology, it actually makes so much sense. When it comes to boy bands, this K-Pop group is probably the most well-rounded of them all from an astrological standpoint. Being in a band can't always be easy, but the sun signs of Yeonjun, Soobin, Huening Kai, Taehyun, and Beomgyu align with each element of the zodiac (fire, air, earth, and water), making them a match made in heaven. The differences among each of their signs provides an energy that just can't be duplicated. So if you're curious to find out how TXT's zodiac signs prove that opposites attract, look no further.

The signs of each of the five members in TXT describe an interesting polarity among the boys. Yeonjun's a Virgo, while Beomgyu's a Pisces (opposite signs). Huening Kai's a Leo, while Taehyun's an Aquarius (again, opposite signs). The only member that doesn't have an opposing sign is Soobin — but as a Sagittarius, and the leader of TXT, I'm sure he's not complaining. Having this dynamic allows them to balance each other out almost effortlessly, and they can learn so much from one another, and about themselves. The well-rounded energy present in TXT's dynamic is one of the reasons why the group's first studio album, The Dream Chapter: MAGIC, debuted at No. 3 on Billboard’s World Albums Chart in November 2019.

Astrology's the perfect tool to use to understand the complexities of one of your favorite groups. If you're looking to better understand TXT and each member's zodiac sign, here's what you need to know:

Being born under the sign of Virgo makes Yeonjun the most helpful and analytical member of TXT. He prioritizes solving problems, and likes to ensure that everything is running as smoothly as possible. As the problem solver, he's also an excellent person to come to for advice, and can use his earth sign nature to find productive ways to deal with any issue at hand. Being a mutable sign, he's easily able to adapt to any new changes or adjustments that come up, which is essential when working with other members. He's also known as a "legendary" trainee when it comes to his artistic skill, and as a Virgo he likely takes that role very seriously. In TXT, the band likely appreciates him for everything he does to help and support everyone in the group.

As the optimistic and adventurous member of the group, Soobin is the life of the party in every scenario. When things get too tense, he's likely the member who encourages everyone to look at the bright side of things, and he's appreciated for his fun outlook on life. Since he's the leader of TXT, his optimistic nature keeps his bandmates inspired and striving for greatness. Sagittarius is a mutable fire sign, so his extroverted nature is expressed in a way that's adaptable and always on the move. With the desire to always learn something new, it's probably rare that finds himself in a rut. Always seeking out the next excursion, he likely is the one to remind his bandmates to always have fun.

As the radiant, energetic sign of the zodiac, Huening Kai's warmth keeps each member inspired and enthused. As a Leo, he's a natural-born leader and has no problem taking the lead when necessary. Despite the initiative nature of Leo, it's actually a fixed sign, so he has the capacity to maintain his positive attitude, bringing a sense of vibrancy and life to the group. As the sun-ruled sign of the zodiac, Huening Kai is motivated by acknowledgement, which can be easily fulfilled as a member of TXT. His desire to share his creativity with the world is what makes his energy a necessity to the group.

Taehyun is the only air sign of the group, so his Aquarian energy really shines alongside his fire, earth, and water bandmates. As an Aquarius, he prioritizes community and togetherness over everything — which is an essential component to this group's essence. In addition to his desire for community, he also desires opportunities to express his unique individuality, which is definitely nurtured being part of TXT. Air signs are most commonly known for their desire for communication, and Taehyun shares his original opinions and ideas with pride, coming up with new ways to do things in order to keep things fresh. In interviews, he's always willing to speak up and answer questions since he's someone who values a good conversation. His bandmates likely appreciate his willingness to always think outside the box.

Beomgyu's watery, intuitive nature makes him a key component to the group, considering he's the only water sign. As a Pisces, he adds a strong sense of intuition and emotional depth to TXT, and his compassionate nature really allows him to easily slip into his bandmates' shoes. Being able to understand where each person is coming from is a necessity in any group, and his sensitive personality can act as a reminder to the rest of the gang to check in with their emotions from time to time. Water allows things to flow, and as a Pisces, his ability to adapt is something his bandmates can really appreciate.

More like this
Lizzo's Birth Chart Explains Her Confidence & Why She's Made For The Spotlight
By Chelsea Jackson
The TikTok Dance Challenge You Should Try, Based On Your Zodiac Sign
By Chelsea Jackson
May 10, 2021 Will Be The Best Week For These Zodiac Signs
By Roya Backlund
Stay up to date