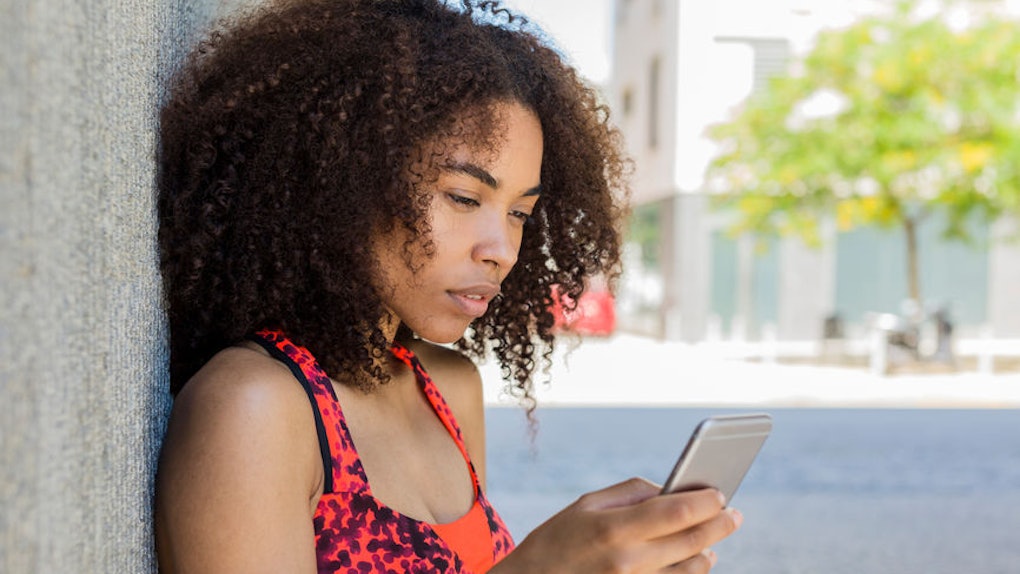 This Is The Best Text To Send If You're Mad At Your Partner, According To An Expert

Tell me if this sounds familiar. You're p*ssed at your partner, so you start to compose a text that'll really let them know how you're feeling. You type and delete, over and over, because you're unable to fully express the fury in your heart while still making your point. Eventually you give up on said point and lash out, which just escalates things and you end up fighting over text. If anything, you feel worse now. Yeah, the rage text, it turns out, isn't the best text to send if you’re mad at your partner. Shocker, I know.

So, in this scenario, what should you have done? What's the right text to send your partner when you're angry and you want them to know that, but you don't want it to turn into a huge, unproductive fight? How do you communicate in a way that may actually lead to a resolution when they do something to legitimately make you mad? Well, it's not easy, but it is possible. To help compose this message, I reached out to Susan Winter, an NYC relationship expert and love coach, for her advice. Here's what she says is the best way to handle this situation.

1. Give yourself time to cool off before texting them.

Of all the advice Winter offers, this first bit may be the hardest to follow — but it’s the most important: Wait.

Listen, I get it. When you're angry, it's hard not to immediately take action and let the chips — or in this case, texts — fall where they may. But in this case, the only action you should take is inaction.

“The greater your anger, the more you need to wait,” Winter tells Elite Daily. “Though the impulse is to attack, accuse or defend, here's where every word you write is of paramount importance. Waiting to construct the perfect statement will make all the difference in your point being heard, and understood.” It’s hard, but it’s totally worth it.

2. Be clear on what you want to say when you do speak.

While you’re (im)patiently waiting to calm down a bit, Winter says to take the time to think about what it is that you really want to communicate to your partner. When you put your feelings aside, what's the most important takeaway? Once you know the answer to that, you're ready to “make your statements short and concise," suggests Winter. "A text message is not the place to elaborate, or lay out the body of your argument. That's better done in person.”

3. Don’t engage in a fight over text.

No matter what you do, resist the urge to hash it out angrily over text because, as Winter warns, “Starting a fight over text is guaranteed to fail.”

If you've ever gotten into an argument over text, then you know how true this is. “You're going to blow up and say things you don't mean to say in reactivity," she says. "Emotions escalate quickly, causing both partners to overreact and write things they'll regret.”

Plus, it’s a lot harder to take things back when there is a literal written record of them. So take time to really think about what you want to say before you send it.

So now that you’re good and calm(ish) and you’ve really considered why you're so upset, it’s time to actually send the message. But what should you say? Winter says there are four things to keep in mind.

The first thing you want to do is to keep the tone of the message non-reactive. “Non-reactivity shows that you're willing to negotiate," she explains. "You're clearly upset, but you're also levelheaded. It shows that you are open to a real conversation rather than accusations and attack.” That way, they're far less likely to immediately go on the defense.

Second, even though you have a lot of feelings and thoughts right now, this is not the time or the outlet to spill them all out. Instead, Winter says to keep it short, because if it’s brief, it’s automatically "less threatening.”

Try and keep your statement rational and diplomatic. That way, they don’t become combative right off the bat. If all you want to do is vent then go ahead and vent, but it won’t help you get resolution any faster. If anything, it will make it even harder. Because, after all, “who wants to ‘talk it out’ when they know they're going into battle?” asks Winter. No one. The answer is no one. And for this same reason, Winter says not to make accusations over text.

OK, so what does a text like that actually say? What fits all the requirements and sets you up for a successful and productive conversation face-to-face? Winter says it should go a little something like this:

I'm hurt and upset by what's happened. I'd like to hear your side of it so that we address the situation together.

This works because it lets your partner know how you're feeling without putting them on the defense. You should never have to lie or hide your feelings from your partner. That's not healthy, but there are ways to communicate it without escalating the problem, and help you reach a resolution that will make you and your partner feel happy and satisfied. That's really what it's all about, right?