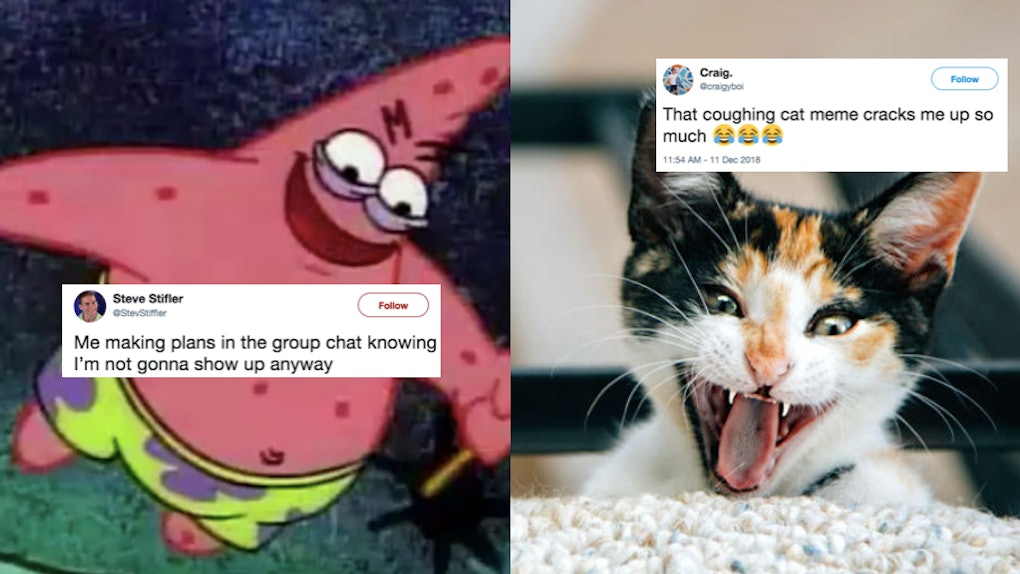 If you tend to stay up to date on all of the latest and greatest trends, you've probably noticed that 2018 has had no shortage of people having fun on the internet. And since one of the most hilarious aspects of web culture is memes, you'll want to make sure you take a look at all of the best memes from 2018. They're absolutely ridiculous, but they're pretty much guaranteed to make you LOL.

To be completely honest, I don't have a clue about your general sense of humor. But regardless of what tends to tickle you pink, I can pretty much promise you that this year had at least one meme that could make you laugh. Maybe it was related to pop culture, like Ariana Grande's "thank u, next." It might've been an ode to your childhood, like Evil Patrick, or it could have easily emerged from the random depths of the strange, strange universe, like the infamous moth memes. Either way, the internet produced a ton of ridiculous jokes this year, and I've rounded them up in the list, below. I can almost guarantee you won't regret taking just a few minutes of your time to sit back, relax, and laugh the day away.

Anime enthusiasts were thrilled by the wildly popular "Is This A Pigeon?" meme. According to Know Your Meme, it originated from a '90s Japanese anime series called The Brave Fighter of Sun Fighbird. It shows the main character mistaking a butterfly for a pigeon, and lots of people made spin-offs, showing him making other hilariously obvious mistakes. Netflix got in on the fun in May 2018, asking "Is this a teen?" with the meme about 28-year-old actors being cast as high schoolers.

Things got weird when the moth and lamp memes emerged from the bizarre depths of the internet. Per Know Your Meme, it plays on how moths are so strongly attracted to lamps. It's such a simple meme concept, but people really got into the moth and lamp memes after someone posted a viral photo of a giant moth on Reddit during the summer of 2018. IDK if they're more funny or creepy, but there are plenty of them out there to help you decide how you feel about them.

The "Don't Say It" meme jokes about wanting to say something when you know you shouldn't. According to Know Your Meme, it first started back in October 2017, when Twitter user @Pandamoanimum tweeted about hailing a taxi, and after repeatedly thinking, "don't say it," they caved, asking how the driver's night has been. On Nov. 7, 2018, they reposted a similar tweet which ended up going viral. People started making their own, and let me tell you — they're all too relatable.

4. They Did Surgery On A Grape

If you're an Arianator, you probably know the origin of the "thank u, next" meme. Ariana Grande came out with the song praising her exes, "thank u, next," in Nov. 2018, per Know Your Meme. One of the lyrics goes, “One taught me love, one taught me patience, and one taught me pain,” and Twitter built off of it by tweeting it with three pictures representing those who and what taught them love, patience, and pain. They're usually pop cultural, food, or pet references — and they're usually hilarious.

"Let's Get This Bread" combines the right amount of humor with encouragement. According to Know Your Meme, it originated in July 2017, when Twitter user @BeastCaucasian posted a selfie of a man in a Chuck E. Cheese costume with the caption, "Wake up hustlers, let's get this bread. No days off," which is basically another way of encouraging people to go make that money. Then in May 2018, an IG meme account by Elliot Tebele posted it to Facebook, and people started applying it to any and all situations where encouragement is needed to go out and "get this bread."

The "Evil Patrick" meme uses a super creepy screenshot of the beloved Spongebob Squarepants starfish. According to Know Your Meme, it comes from the 1999 episode called "Nature Pants." It became a popular meme in February 2018, when people began to post it alongside jokes about their annoying personal habits, like ghosting on group plans. Accompanied by Evil Patrick, people were able to get a laugh out of moments like "leaving the pot in the sink because 'it needs to soak.'" LOL, too true.

"Donald Trump Double Fist Pump" is kind of a bleak one, if you ask me. Per Know Your Meme, photographs of the POTUS surfaced where he apparently double fist pumped his way to a 9/11 memorial event in Shanksville, Pennsylvania. Elite Daily reached out to the White House at the time for comment on the intention behind Trump's gesture but did not receive a response at the time of publication. Lots of people manipulated the photo, showing Trump do ridiculous things while fist-pumping, and despite the odd nature of the original photo, the memes are pretty funny.

The "Walmart Yodeling Kid" took off earlier in March 2018, when child performer, Mason Ramsey, was filmed yodeling in an Illinois Walmart. According to Know Your Meme, the video of the unique performance was uploaded to YouTube, and reposted by Twitter user, @DumbAssVegan, who wrote: "Me: which aisle can i find light bulbs? Walmart employee: [video of Ramsey singing]" From there, it took off, and everyone made hilarious memes with Ramsey, like the one above where he's "replacing" the Statue of Liberty. LOL!

You may have seen the Coughing Cat meme earlier in December 2018, and honestly, it was too funny. Per Know Your Meme, it originated in November 2018, when humor Instagram account @Idascreatures posted a photoshopped picture of an open-mouthed, wide-eyed cat. On Dec. 3rd, Twitter user @aliahgeyes tweeted the image with the caption, "this is how little kids cough," and nobody could stop laughing. It was too accurate, and people were loving it.

Overall, 2018 was quite an interesting year, but at least everyone pretty much nailed it in the realm of memes. Here's to hoping 2019 provides for some equally hilarious memes.