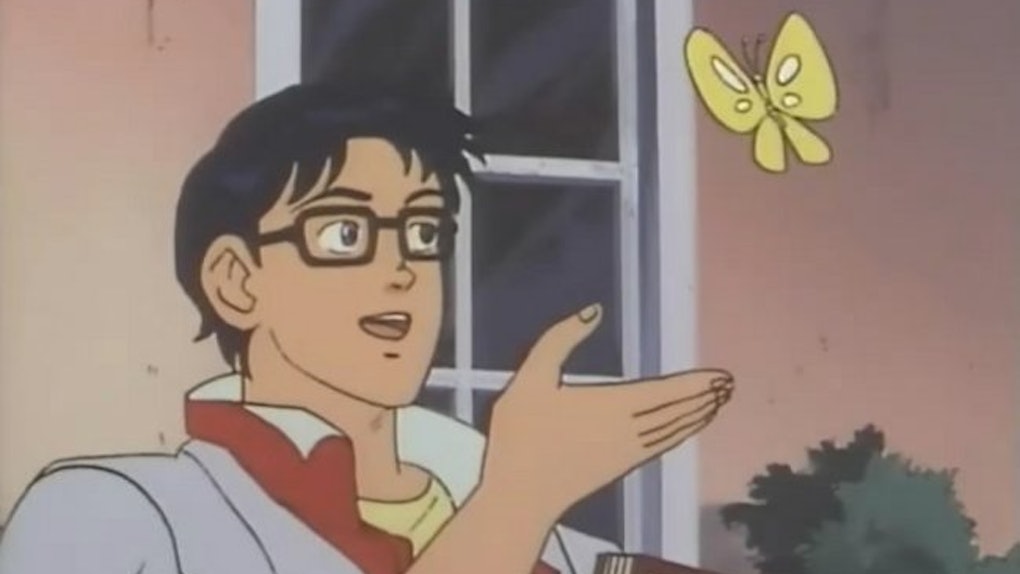 How To Make Your Own "Is This A Pigeon?" Meme, Because It Is So Easy

I think it's safe to say that memes are firmly a part of everyday life in 2018. Heck, most of my conversations consist mainly of sharing hilarious memes back and forth. Sometimes a particularly potent meme rolls around, and you can't stop thinking of different ways to use it. While searching the web to find your favorite iterations can be fun, you might want to try putting your own spin the hottest meme of the moment. With that, here's how to make your own "Is this a pigeon?" meme.

Before you get started, you probably want to know what this meme is all about. It's actually been around for quite awhile, but it has recently been rocketing in popularity. According to Know Your Meme, the meme originally comes from a scene in a 1990s Japanese anime television series called The Brave Fighter of Sun Fighbird. In a 1991 episode of the show, a "humanoid" character, Katori, identifies a butterfly as a pigeon while trying to "act human" in front of a detective. While looking at the butterfly, he says, "Is this a pigeon?"

Kara Dennison (an original fansubber of the show, i.e. a fan of a foreign show or movie who adds subtitles to it for other people to watch) explained the context a bit further on her website. She shared that Katori is an android who loves Earth but knows very little of it. Even so, the scene caught some people's attention while also making them laugh.

Separate from the show, the image was first uploaded to Tumblr in December 2011. It was then regularly used in posts about "subtitle fails" even though it is a direct translation of the original quote.

The most recent resurgence of the "Is this a pigeon?" meme finds the scene being used to express great confusion. Most of the meme variations are object labeled creations that capture befuddling moments of the current times. For example, Netflix posted a tweet on May 3, 2018 with its version of the meme questioning television casting decisions by asking if a "sexy 28 year old actor" is "a teen."

Other variations include this take on makeup looks.

Someone else questioned what any sudden bodily pain might mean.

There was a question about what productivity looks like.

Another Japanese brand was brought into the "Is this a pigeon?" meme mix.

Since the flood of meme variations began in late April and early May of this year, there are a ton of them floating around online. After some perusing, you might have a great idea for your very own "Is this a pigeon?" meme.

Thankfully, you don't need advanced computer knowledge to share it with all of the internet. You can use a meme generator website like the Imgflip image generator, which lets you download popular meme templates and add your very own captions. You can choose from the text-free "Is this a pigeon?" image, or you can use the image with the original caption and write over it. It's up to whatever your meme-creating heart desires.

To add your caption, you first choose your desired "Is this a pigeon?" meme template. Then, you can either download it and add captions in a program like Preview, or you can add captions to the image on the Imgflip website and download your completed meme. Both options will give you the meme result you're looking for.

If, like me, your mind is still boggled by the phenomenon that is the Walmart Yodeling Boy, you could pose a question about it in your own "Is this a pigeon?" meme.

Of course, there are endless opportunities to get creative with the "Is this a pigeon?" meme, so if you've been brainstorming some ideas, you can check out a meme generator and try it out for yourself.

Time will only tell if the "Is this a pigeon?" meme will become a mainstay like some of the memes that took over the internet in 2017. One meme that ruled the end of 2017 has already made a resurgence thanks to the excitement over the upcoming royal wedding of Meghan Markle and Prince Harry. The distracted boyfriend meme recently got a royal update when an image of a commemorative royal wedding coin was released on May 1. Twitter user Chris Barker used the magic of photoshop to turn the royal coin into a hilarious new meme.

I haven't seen any royal "Is this a pigeon?" memes yet, but that doesn't mean you can't make it happen. It might just be what the meme world is waiting for.