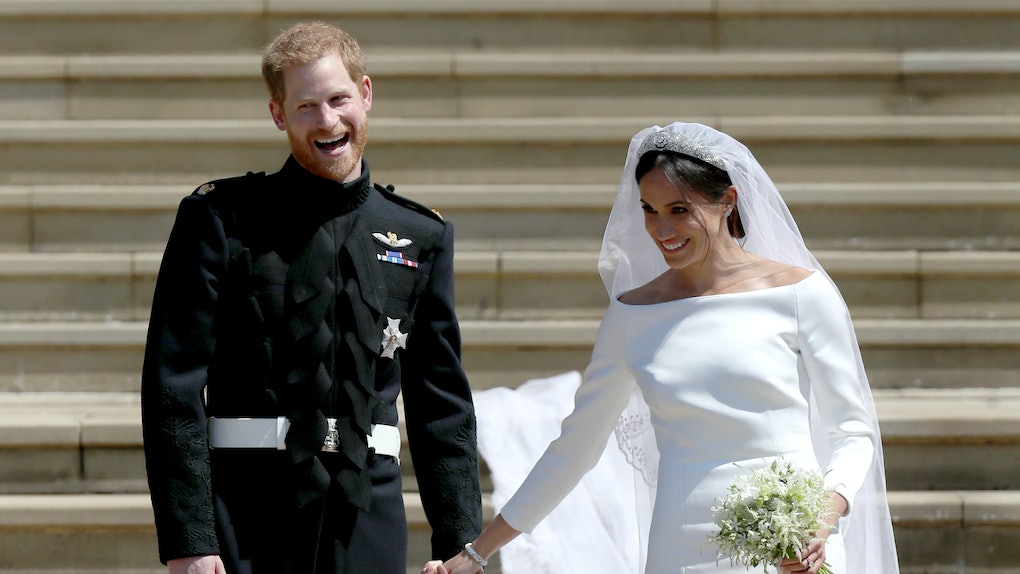 [Jonathan Van Ness voice] Can you believe? It's been a whole year since we planted ourselves in front of our laptops and royal snack spreads to watch our favorite transatlantic couple get married on May 19, 2018. Meghan Markle and Prince Harry's first wedding anniversary weekend was full of nostalgia. Harry attended Lady Gabriella Windsor's wedding on May 18, returning to St. George's Chapel where he and Meghan got married 364 days before. (Meghan sat this turn-up out, likely because of their bundle of joy, Archie.) And via the @sussexroyal Instagram, Meghan and Harry dropped new, behind-the-scenes photos of the royal wedding from the vault. They're super tender moments, like shots of Harry and Prince William chilling together in a stairwell, and Meghan and her mom clasping each others' hands and having a chat.

It's surreal to watch the Sussexes' slideshow and think that the royal wedding was a year ago. It's like, "Here goes Meghan Markle, aka Rachel from Suits, as well as a badass intersectional feminist, an unapologetically black woman, and a philanthropist, marrying a reformed bad boy who's hot and kind enough to unite the U.S. and the U.K." OK, work! And she looked absolutely warmed with happiness and stunning during her wedding. How can anyone not stan?

In general, though, the couple has had so many endearing moments in their first year as newlyweds that have def made it hard not to stan. So in the spirit of a nostalgic first wedding anniversary, here are a few highlights from Meghan and Harry's eventful first turn around the sun.

The Sussexes returned to Sussex

Meghan and Harry kept it low-key for the first few months of their marriage. They even kept it chill for their honeymoon — an expedition so secret that, according to an inside source at Buckingham Palace, only the Queen and William knew where they went. "A few immediate family members" were told after the fact. "It was very important that the newlyweds had a private honeymoon where they could be alone together out of the public eye," the source said to The Sun.

Then, October hit. First, they went to Sussex, of which they're the Duke and Duchess — looking absolutely cute and very in love. With their fingers intertwined and a hand on the back here and there, they showed PDA, which is a big deal (since royal couples historically don't show PDA).

Then, about a week and a half later, Kensington Palace spilled the tea that Meghan was expecting. A few days before, a source told Us Weekly that Meghan and Harry were trying for a baby, and that they “both want a big family, at least three kids."

Even as early as March 2018, there are had been rumors that a pregnancy would be on the horizon soon after the royal wedding. Royals reporter Katie Nicholl said to Entertainment Tonight:

My sources are saying that Prince Harry, particularly, is very keen to start a family, pretty soon after the royal wedding. He's made no secret about wanting children.

I think that moment really kicked in when his brother, Prince William, of course, settled down with Kate Middleton. That has definitely gotten Prince Harry pretty broody.

Meghan and Harry lived their best life in New Zealand

October also was eventful because of the royal tour. Harry and Meghan visited Tonga, a Polynesian island, and showed in up formal wedding attire for their private audience with Queen Nanasipau'u and King Tupou VI.

Some of the best pics of these two, though, are from Harry and Meghan's time in New Zealand: with Korowai cloaks draped over their typical straight-laced Brit attire, strolling through the redwood trees, and hanging out with animals.

Harry and Meghan made mental health a priority

Although footage from the visit dropped this May, Meghan and Harry spent some time in November 2018 helping develop Shout, a 24-hour crisis texting service in the U.K. Along with Will and Kate, Meghan and Harry had been working on Shout for months. The Royal Foundation donated £3 million in total to help get Shout up and running.

And of course, baby Archie arrived

News that Meghan and Harry's royal baby had been born added a little brightness to everyone's day. Of course, the confirmation that the baby's name was Archie Harrison Mountbatten-Windsor kind of threw folks for a loop. And of course, leave it to the internet to meme a newborn: the next few days were spent with endless rounds of Riverdale jokes ft. the royal baby.

Overall, it's been an exciting year for the Sussexes

A hearty cheers to our favorite royal couple. Safe to say royals fans everywhere are looking forward to another year of bougie royal events, Meghan's tailored slays, and philanthropic work from our #relationshipgoals.