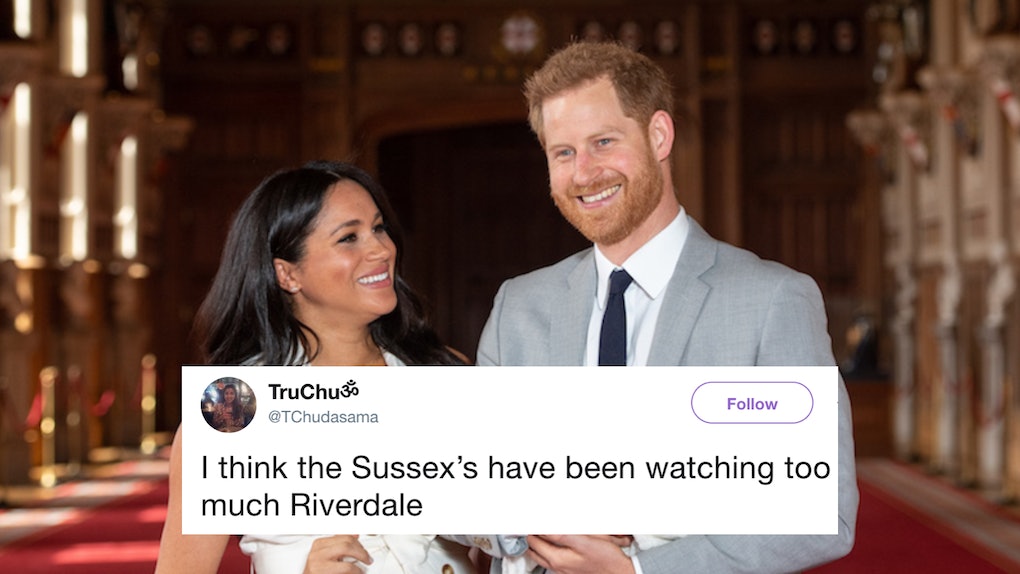 Isn't it fascinating when two of your favorite worlds collide? My guess is you never expected the royal family and cult favorite TV show Riverdale to merge, but then again, I never expected Ron from Jersey Shore to date Malika Haqq of Keeping Up With The Kardashians fame, either. And yet, here we are. While Ron and Malika proved to lack sticking power, these tweets about Meghan and Harry's baby Archie being on Riverdale are going to last me a long time.

To catch you up, Meghan and Harry welcomed their first child, a boy, to the planet on Monday, May 6. It took them two full days to announce their son's name, but man, fans were totally hyped when they finally did! On Wednesday, May 8, the Duke and Duchess of Sussex shared a picture of their little bundle of joy meeting the Queen on their @SussexRoyal Instagram account with the following caption:

Ya hear that, world? Archie Harrison Mountbatten-Windsor is officially in the house! — er, palace!

While some people might be interested in doing a deep dive into the meaning behind baby Archie's name, which includes lots of sweet details like links to Princess Diana and more, Riverdale fans were like, "I think we've heard enough." Archibald "Archie" Andrews of Riverdale High School is now the second most famous Archie on the planet and he's a fictional character. Royal family and Riverdale-hybrid fans are going wild putting two and two together on Twitter.

Mainly, everyone is assuming that Meghan and Harry have either always been closeted die-hard fans or must have binge-watched the show while they waited for their baby's arrival. I suppose it's possible they were inspired by the main character. Like, in theory.

Fortunately for Meghan and Harry, it sounds like real Archie's life so far has been much more peaceful than the series' character's. Meghan told reporters Archie has "the sweetest temperament" and is "really calm." She added, "It’s pretty amazing. I have the best two guys in the world, so I’m really happy. I suspect Veronica and Josie (fake characters who are Archie's romantic interests in the show) would beg to differ, but as I said, they're not real people... so...

While fans are having a ton of fun joking about the surprise connection, Meghan and Harry are somewhere introducing their little one to their extended family members and likely working on their napping and feeding routine.

That is one cute baby. Maybe he'll have red hair like his dad Harry, or, wait a minute — like Archie the comic!

This is getting a little too meta, you guys.