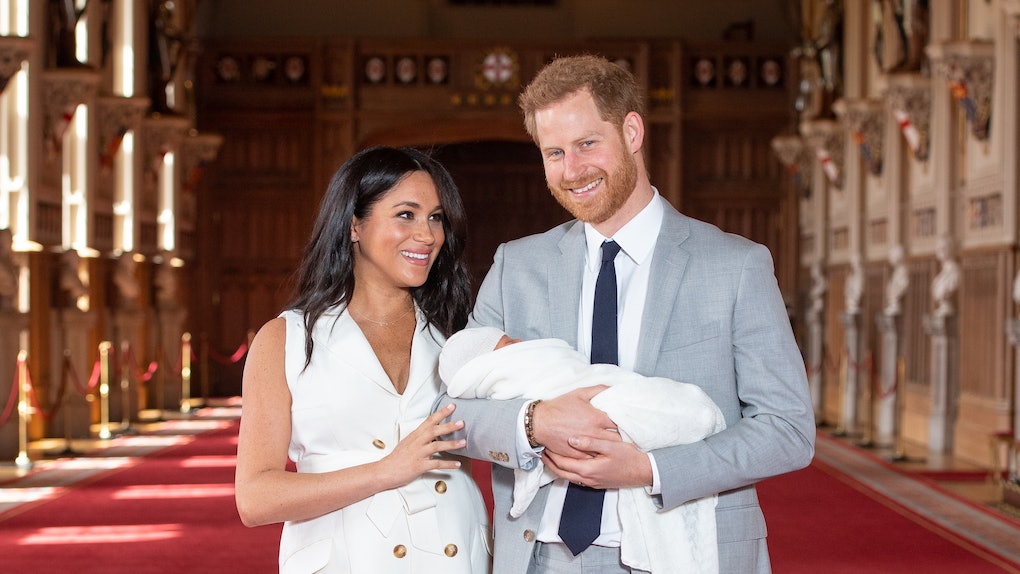 It's all happening, guys! Prince Harry and Meghan Markle, the Duke and Duchess of Sussex, are new parents. Their little bundle of joy arrived in the early morning of May 6 and the first photos of the new family hit the scene two days later. Meghan Markle's first comments about her new son are also so lovely and will put excitable fans' minds and hearts at ease.

Harry and Meghan announced early on that they were going to keep the birth of their baby private. Only on the day of his arrival did the public find out it was a boy! While they have yet to announce his name, the new mother and father are letting folks in on how the first two days of parenting have gone. According to Meghan, being a new mom is "magic."

"It’s pretty amazing," she said in her first interview after giving birth. "I have the best two guys in the world, so I’m really happy," she said.

So far, it sounds like Baby Sussex's first days on earth have been... dare I say... peaceful? I didn't know there was such a thing as a peaceful newborn! However, Meghan says her son has "the sweetest temperament" and is "really calm."

Harry jokingly added, "I don’t know where he gets that from!"

Truthfully, the two sound like they're in newborn bliss. Meghan said her baby boy has "just been a dream" and that "it’s been a special couple of days.”

Harry emphatically agreed. When asked about parenting, he said, "It’s great. Parenting is amazing. It’s only been two and a half days, but we’re just so thrilled to have our own little bundle of joy."

Later, Harry added he's just so thrilled to spend time with his son as he "slowly, slowly starts to grow up."

Naturally, fans are dying to know if Baby Sussex looks more like Meghan or more like Harry, something she says they're still trying to figure out themselves.

"Everyone says babies change so much over two weeks," Harry said. "We’re basically monitoring how the changing process happens over this next month, really. His looks are changing every single day, so who knows?"

On the day of Baby Sussex's delivery, Harry ecstatically spoke with reporters about his son's arrival. "It’s been the most amazing experience I could ever possibly imagine," he said.

How any woman does what they do is beyond comprehension. But we’re both absolutely thrilled and so grateful to all the love and support from everybody out there. It’s been amazing, so we just wanted to share this with everybody.

Harry went on to gush that the delivery was "amazing, absolutely incredible," adding, "As I said, I’m so incredibly proud of my wife. As every father and parent would ever say, your baby is absolutely amazing, but this little thing is absolutely to die for, so I’m just over the moon."

Now it's just another waiting game until it's time for the new parents to finally announce this sweet one's name.

Congratulations, everyone! And, welcome Baby Sussex!

More like this
Meghan Markle's Wreath For Prince Philip's Funeral Was Full Of Meaning
By Cianna Garrison
Meghan & Harry's Statement About Prince Philip's Death Is Simple, But Moving
By Sydney N. Sweeney
Meghan Markle & Prince Harry's Beef With The British Tabloids, Explained
By Brandy Robidoux
Stay up to date