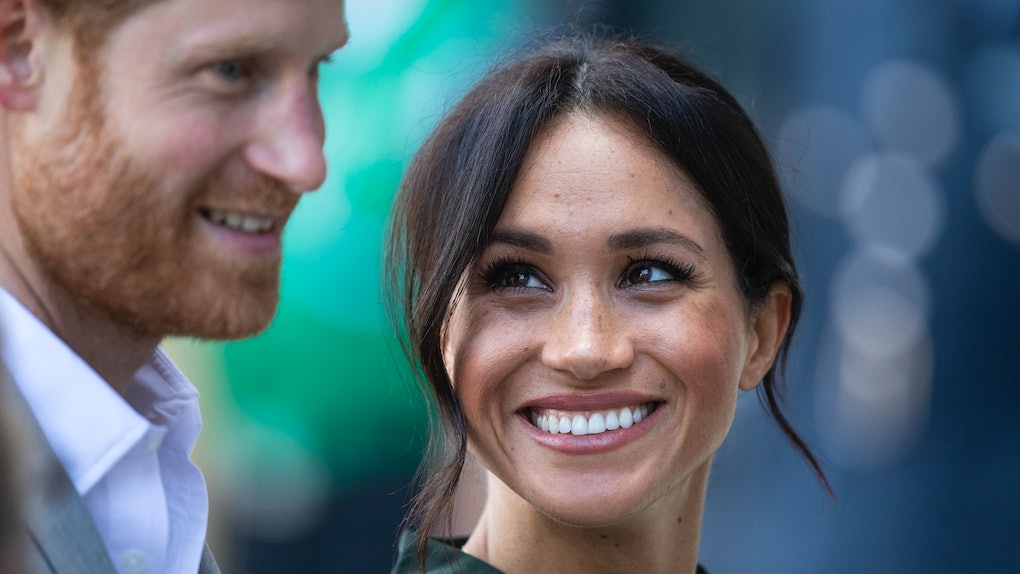 I realize the most recent royal wedding was four whole months ago, but I'm still every bit as obsessed with Prince Harry and Meghan Markle as I was on May 19. Since then, the Duke and Duchess of Sussex have remained on my radar with every public appearance they make. On Oct. 3, the couple made their first visit to their namesake together, and according to an expert, Prince Harry and Meghan Markle's body language in Sussex shows their post-marriage glow is still shining bright and their love for each other hasn't wavered in the slightest. TBH, I'm not even a little surprised by that.

Since their wedding, Harry and Meghan have continued to prove that while, yes, they are a royal couple, they're also just a couple. They've broken a few royal traditions, most notably the whole "no PDA" thing. Which OK, yes — PDA isn't completely against the royal family rules, but it can be frowned upon if shown in excess. Body language expert Robin Kermode told Daily Mail, "The queen rarely holds hands with her husband in public and this seems to have set an unwritten precedent for the other royals." Unlike the other royals who have followed in Queen Elizabeth's footsteps and refrained from PDA, Harry and Meghan have let the whole world know they're into each other, PDA and all. Bless.

I spoke with Traci Brown, body language expert and author of Persuasion Point: Body Language and Speech for Influence, to see what she thinks of the the royal couple during their first trip to Sussex. Here's what she had to say. (Get ready to swoon!)

1. They're totally in sync.

Our bodies have a way of doing things that we don't even know they're doing, like mimicking someone's actions when we're in love with them. "We are hardwired to copy people," Brown tells Elite Daily. "See how they're doing exactly the same thing? Totally in step with each other and waving the same way? That's what couples do when they're energetically in sync and very connected. And it happens naturally." How cute is that?

2. They're comfortable with each other.

When you're with someone who you have an incredible connection with, you probably feel comfortable around them, and feel the urge to comfort them when needed. According to Brown, that's exactly what Harry and Meghan exemplify in this picture. "Again, they're in step. But this time Harry has his hand on her back which is probably both to guide her a bit and a comforting gesture," she explains. "A hand on the back lets you feel that someone is there, supporting you and guiding you along the way. It's quite comforting for most folks."

Brown says that when you're genuinely happy with someone, your smile stretches all the way to your eyes. "Both of them are showing real smiles," she says. "There's no faking how into each other they are in this shot!" Another thing Brown points out in this picture is how Meghan is looking at Harry at a very close range. "That's hard to do if you're not very intimate with that person."

Fret not, you guys. I know what you're thinking: "They're not in sync! Is there something brewing beneath the surface with this beautiful couple?!" No. There isn't. So don't freak out! (I already did that for you.)

"They're not quite as in sync but notice how they've both got similarities with one foot forward. You can't get an exact match all the time, but they're doing pretty good here," Brown points out. (Whew!) "I think what's more telling is the way their fingers are intertwined. When's the last time you've seen a royal do that? Certainly not Will and Kate. It's a very telling PDA."

So there you have it. As if you needed any reinforcement that Harry and Meghan are #goalsAF, their body language shows their love is as strong as ever. Here's hoping they keep gazing adoringly at each other so we can continue to gush over their everlasting love, please and thank you.