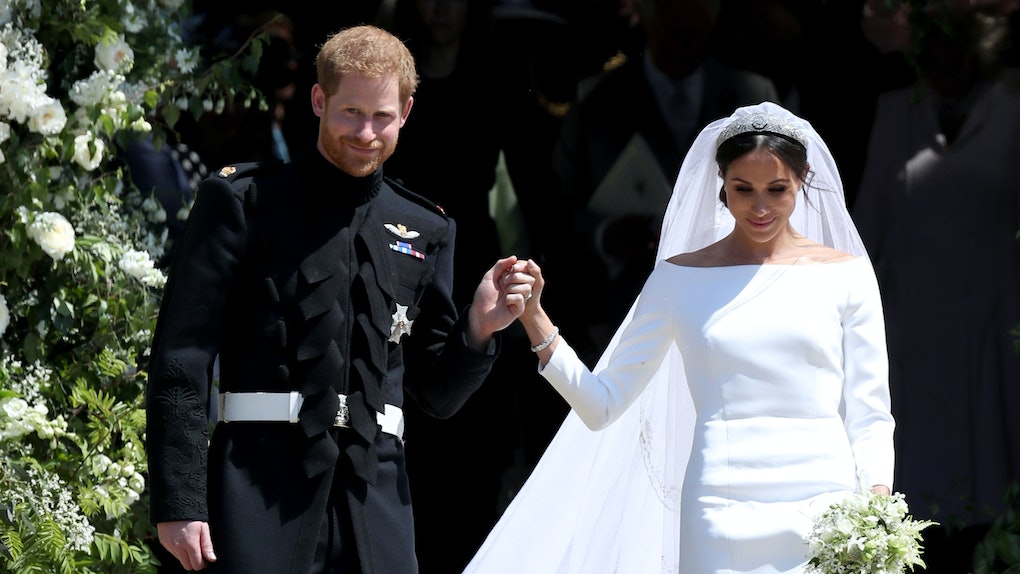 If you follow the royal family in any capacity, you are most likely aware of the fact that May 19 commemorates a very special day. Exactly one year ago on May 19, 2018, the Duke and Duchess of Sussex exchanged wedding vows, officially becoming husband and wife. And if you haven't already seen Meghan Markle and Prince Harry's first wedding anniversary Instagram post, it honors their marriage with never-before-seen photos. To be honest, looking at these makes me feel like I was actually invited, LOL.

On the morning of May 19, 2019, the official Instagram account for the Duke and Duchess of Sussex posted an adorable video commemorating their wedding last year. Upon clicking the play button, you'll see a slide that says, "One year ago today..." which is followed by several black-and-white images. Per the BBC, these are unseen photos from what was probably the most-watched wedding of the 2018, so get ready for behind-the-scenes greatness.

Some show Meghan and Harry getting ready, others show Prince Phillip walking Meghan down the isle, and there's even one of Harry walking to the chapel. According to the caption of the Instagram post, they chose the song "This Little Light Of Mine" to play in the background, and it closes with a slide that reads, "[T]hank you for making the memory of this day so special." Definitely take a look at it for yourself, below.

IMO, a few photo highlights include the photo of Harry and Meghan smiling and holding hands during a candid moment, the snapshot of Harry walking down the stairs alongside Prince William to get the festivities started, and the photo of Meghan and her mom, Doria Ragland, sharing a special moment on Meghan's big day. But there's no denying that each and every one of them is so, so special.

And while the images in the video are undeniably intimate and incredibly gorgeous on their own, the caption of the Instagram post is just as special. It reads:

Happy one year anniversary to Their Royal Highnesses, The Duke and Duchess of Sussex! Today marks the one year anniversary of the wedding of The Duke and Duchess of Sussex. Their Royal Highnesses exchanged vows at St George’s Chapel within the grounds of Windsor Castle on May 19th, 2018. The selected song “This Little Light of Mine” was chosen by the couple for their recessional. We hope you enjoy reliving this moment, and seeing some behind the scenes photos from this special day. A message from The Duke & Duchess: Thank you for all of the love and support from so many of you around the world. Each of you made this day even more meaningful.

Now, the day before Meghan and Harry's anniversary, May 18, will commemorate the wedding of Lady Gabriella Windsor, the daughter of the Prince and Princess Michael of Kent, and Thomas Kingston, a successful equity analyst, making the weekend one of many celebrations. Lady Gabriella, aka Lady Gabriella Marina Alexandra Ophelia Windsor, is connected to the royal family through her father, Prince Michael of Kent. Prince Michael the Queen's cousin, meaning Lady Gabriella is the first cousin once removed from the Queen, and she's 52nd in line to the throne. The choice to get married the day before Meghan and Harry's wedding anniversary was undeniably an interesting one, but to each their own.

Meghan and Harry's anniversary montage was seriously the best thing to wake up to this morning. Each and every photo never-before-seen photo was absolutely gorgeous, making me feel just a little more included. Congrats and happy anniversary, Meghan and Harry!