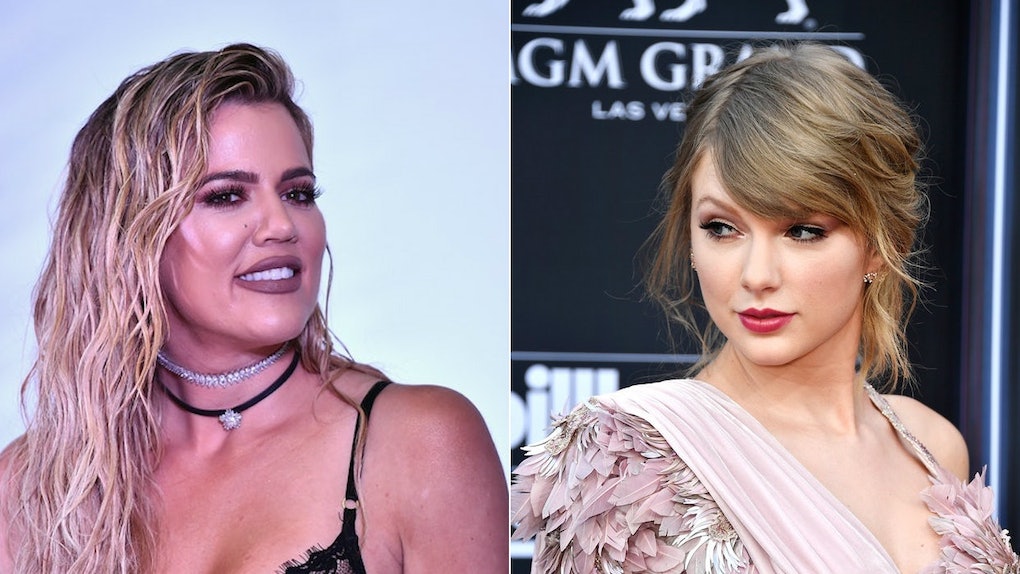 Kanye West isn’t afraid to stir the pot with his music, and one Ye reference might be fueling some “Bad Blood” in the Kardashian family. Just hours after referencing basketball star Tristan Thompson in his controversial new album, sister-in-law Khloé Kardashian worked out to Taylor Swift music — and the shade is so real. Elite Daily reached out to Kardashian and Thompson's teams for comment on the cheating reports at the time, but did not hear back by the time of publication.

Ye, West’s first album since 2016’s Life of Pablo, was officially dropped on Friday, June 1, and quickly stirred talk with its allusions to President Trump, mental illness, and Stormy Daniels. For everyone who’s been keeping up with the Kardashians, however, the real bombshell was a West lyric that addressed Tristan Thompson’s alleged cheating rumors head-on. The line, "All these THOTS on Christian Mingle... That’s what almost got Tristan single,” was heard ‘round the Twitterverse, and now it looks like Khloé Kardashian is clapping back with a reference of her own.

Kardashian, who recently gave birth to baby daughter True, proved that she is continuing to stand by her man amidst allegations of infidelity as she took to Snapchat on Friday, June 1, to share a video of herself listening to Taylor Swift's single, "Delicate." Now, it's no secret that Kanye West and Kim Kardashian have a complicated relationship with the Grammy Award-winning songstress. I mean, who could forget when the "Gold Digger" rapper famously wouldn't let Swift finish during the 2009 MTV Music Video Awards ceremony?

Continuing the feud, Swift wasn't having West's "Famous" lyrics that claimed that he "Made that b*tch famous," and she dropped Reputation in 2017 with a whole host of 'Ye shade.

This is why fans were quick to jump on the significance of Khloé Kardashian's song of choice during her recent Snapchat, which happens to be one of Taylor Swift's tracks on that album. At first, the Snapchat video seems innocent enough, with the fitness guru turning to her followers for workout inspiration.

“I just don’t really have the motivation today to work out,” the new mom says in the clip. “Just not that into it today. What do you guys do when you need motivation to work out?” Then a few KUWTK fans picked up T-Swift's tune playing in the background, and took to Twitter to ponder what it could all mean.

One theory: Has Kardashian just been a closeted Swiftie this whole time? After all, the reality star's basketball beau, Tristan Thompson, has made no secret that he's a big fan of the "Wildest Dreams" singer. In October 2017, the Cleveland Cavaliers star admitted that "Shake It Off" and "Bad Blood" are on his pre-competition playlist, and that he relies on the catchy tracks to get his head in the game, according to InStyle. Is she just listening to a song she likes? The timing has a few thinking otherwise.

Other fans put two and two together, and argued that the notoriously outspoken star was not-so-subtly clapping back after her brother-in-law's reference to the alleged cheating rumors earlier that day.

I wasn't too surprised that West came for Thompson in his album, TBH. While KoKo has been quick to stand behind the athlete, protective older sister Kim Kardashian has been less supportive, and she doesn't care who knows it. After TMZ and The Daily Mail released videos on April 10 of what appears to be Thompson kissing and hanging out with a slew of other women during Khloé's pregnancy, Kim and Thompson unfollowed each other on Instagram. Elite Daily reached out to Kardashian and Thompson's teams for comment on the cheating reports at the time, but did not hear back by the time of publication.

The KKW Beauty guru also broke her silence on The Ellen DeGeneres Show soon after. "Like, I don't even know how to describe it besides it's so f*cked up," she told the host. "We really were rooting for Khloé and we still are. You know she’s so strong and she’s doing the best she can. It's a really sad situation all over."

While West has yet to respond to Khloé's Snapchat video, another major player is slipping back into the narrative. Eagle-eyed fans noticed that Taylor Swift "liked" her post, and OMG, I can't handle it.

It's your play, Mr. and Mrs. West, and there's no telling what'll happen now that Tay has entered the fray. Will Kim be slipping into the comments with some snake emojis? Can we expect another late-night Twitter rant from West? I'm staying tuned.