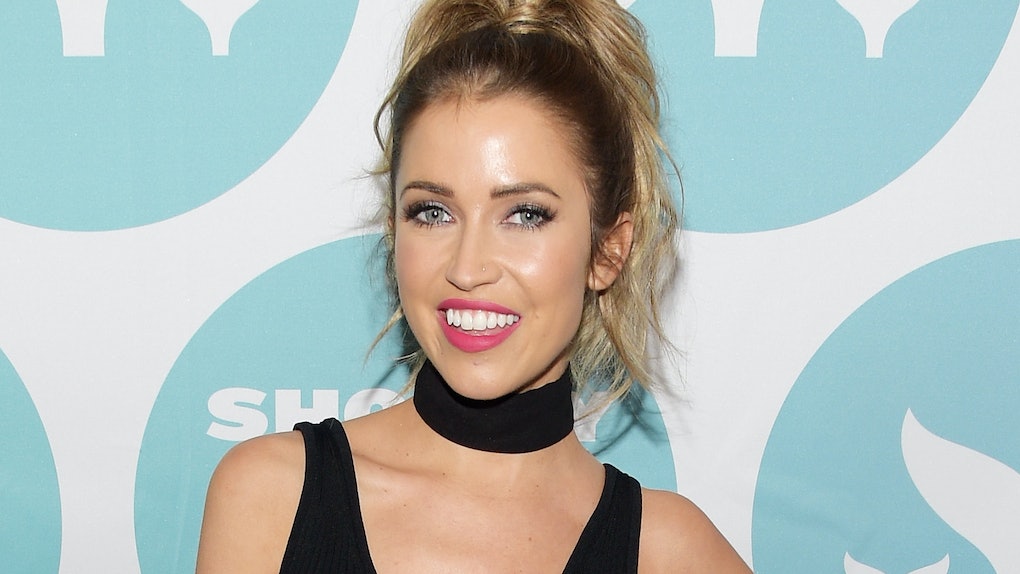 Kaitlyn Bristowe's Quotes About Jason Tartick Are So Sweet, You'll Be Rooting For Them Hard

While The Bachelorette Season 15 has just begun, the relationship between two previous alums of the show has been heating up for a few months now: Kaitlyn Bristowe and Jason Tartick. The Season 11 Bachelorette herself and the Season 14 contestant first sparked dating rumors in January 2019, after Tartick was on an episode of Bristowe's podcast, Off The Vine, recorded late 2018. By the end of the month, they confirmed their relationship and haven't shied away from showing off how happy they are ever since. From their adorable Instagram posts together to Kaitlyn Bristowe's quotes about Jason Tartick, it seems like these two have fallen head over heels for one another.

When Bristowe and Tartick first met while recording her podcast, they exchanged flirty banter, which led to their first date. She teased him, asking when he was going to "finally" ask her out, and he responded saying, if they were in the same city, there was "no reason why they shouldn't go to dinner or grab drinks." And so they did. On Jan. 17, Bristowe referred to herself as Tartick's "girlfriend," and a couple of weeks later on Jan. 30, Tartick confirmed their relationship on the TODAY Show. Since then, they've made it very clear they're oh-so in love, and recently decided to adopt a dog and move in together. To celebrate their decision to share an address and make a life together, I've compiled a list of the adorable things Bristowe has said about Tartick, and it's definitely proof of how into each other they really are.

Jason is the most stable human being I've ever met in my life. He is an absolute rock for me. I've never met anyone like that. I don't even know how to put it into worlds of the kind of person he is. He's just the kind of person that your dad would hope you would marry.

He's everything. He's hilarious. He's so driven. He's smart. He's well-spoken. He loves his family. He's romantic. Like, he's everything.

She's still falling for him.

I fell a little harder last night, when he knew every BSB song, and danced the whole time. You, Jason Tartick, are my fav.

Their communication is incredible.

We are so open and honest and like our communication is like so mature and healthy. And we're very vulnerable. It's life-changing actually.

They have the same values.

I think just how respectful he's been through this whole thing. He just seems to enjoy all the same things as me. He has the same morals and values as me.

She feels like she's known him for a while.

His energy is electric. That's the kind of vibe I get from him, that you just feel like you've known him for a long time... That's the vibe I got from him from the get-go.

She thinks he's a dying breed.

The first thing that attracted me to him was that he seems like a dying breed. They don't make them like him anymore. He's a gentleman.

Their relationship is genuinely healthy.

We both feel like we're established and where we wanna be in our lives and we have, like, the self love and respect to actually, like, be in a mature, healthy relationship.

I was really actually rooting for him to be The Bachelor because I thought he would make a really great Bachelor. I was like, 'I want that guy to be happy.' I think everyone did. He's just so open and genuine. He's very put together; he's very well-spoken and politically correct; he's a good Buffalo guy. I remember thinking, ‘Whoever gets to be with that guy is really lucky.’ I wasn't even thinking that would be me.

She calls him her hype man.

"Oh my gosh, I call him my hype man. We come from obviously the Bachelor world and he’s new to it and I feel like we just support each other in different ways. He has his bank job and he’s so, so smart and he’s gotten success with his bank and he’s financially just a genius, where I’m like more of a creative mind and we just make such a good team that supports each other. He thinks it’s incredible what women can do when they come off the show and how we all support each other and just make success come from that in really good, positive ways."

I'm not crying, you're crying! If that's not proof of how in love Bristowe is with Tartick, then IDK what is, people. These two have serious endgame potential, and I can't wait to see what the future holds for them. (And for all the adorable Instagram photos of their new pup Ramen.)