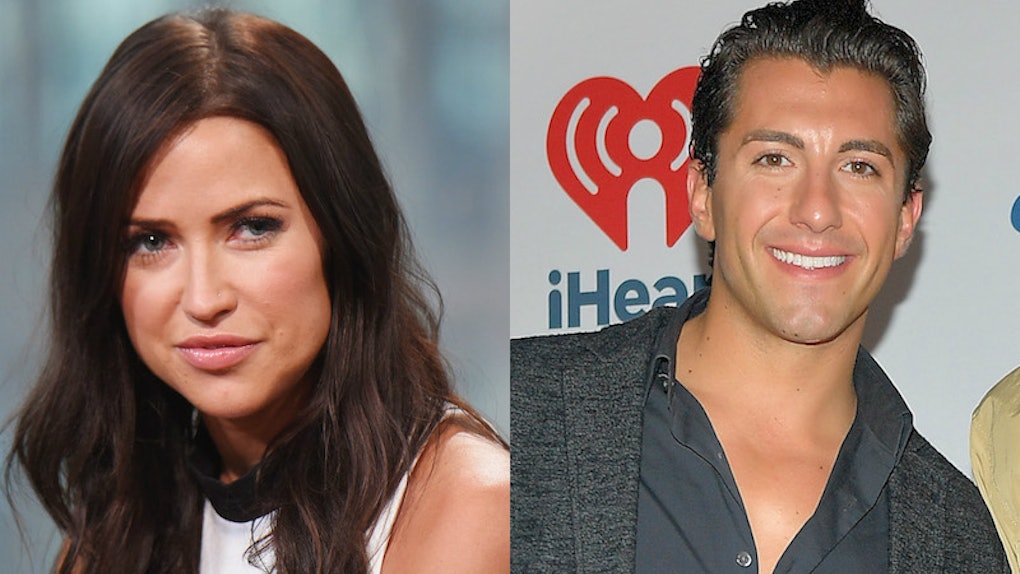 Kaitlyn Bristowe Said She's Jason Tartick's "Girlfriend," So She Might Be Off The Market

Gather 'round, friends. There's apparently a new relationship on the block: Kaitlyn Bristowe and Jason Tartick. In a moment that was captured on social media on Jan. 17, Kaitlyn Bristowe said she's Jason Tartick's "girlfriend," which means that this bachelorette might be officially off the market. Elite Daily reached out to Bristowe's representation for comment on her current relationship status with Tartick, but did not hear back at the time of publication.

Just a week after the pair was spotted on a flirty date in Denver, Bristowe reportedly flew out to Seattle to visit Tartick, who was there with some pals, because they apparently can't seem to be apart for that long. In a black and white video shared to his Instagram Story on Thursday, which has since been either deleted or removed, Tartick was seen introducing his followers to his friends at a bar.

“There’s my boy Nate, he’s on the phone with his sweet girlfriend. And there’s Derek," he said in the video, per People. "And there’s me, drinking a little —,” he continued, holding up a glass to the camera. Before he could finish, Bristowe popped up and exclaimed, “With his sweet girlfriend!” According to Bustle, the video also showed her giggling as she wrapped her arms around Tartick. I don't know what you're thinking but this sounds like BF-GF behavior. You be the judge, though. Here are some screenshots from their evening out:

And they didn't stop there. On Friday, Jan. 18, Tartick shared a photo of himself smiling with his arms spread outward to his Instagram, to which Bristowe responded, "You look like you're ready for me to slow motion run and jump into your arms. Rom com style." Aww!

*files these under "Adorbs."*

These cute moments come after the pair had a flirty conversation on the bachelorette's podcast, Off the Vine with Kaitlyn Bristowe. During their chat, Bristowe pressed the reality star on why they hadn't gone out yet, asking him whether he was "finally" going to take her on a date. “You’re making me blush over here, Kaitlyn,” Tartick replied. “I mean, if we’re both going to be in the same city at the same time, I see no reason why we shouldn’t go to dinner or grab drinks.”

She accepted his invitation to which Tartick replied, “My heart is racing over here, my beats per minute are off the chain."

Speaking to People at the time of the conversation, an insider said that Bristowe is really into him and was looking forward spending time with Tartick. “Kaitlyn is excited to go out with Jason. She likes him so far, and he seems like a good guy for her, that he would treat her really well!" the source revealed. "Her relationship with Shawn has been over for a long time, longer than people know, and she’s ready to date again.”

Previously, Bristowe had been engaged to Shawn Booth for three years following a public courtship and proposal on Season 19 of The Bachelorette, but the pair called it quits in November of 2018. In a statement, the pair said that they had changed as people which took them "in different directions," but added that they were committed to remaining as friends.

Bristowe later opened up about how hard moving on from the relationship was on her podcast, but now that some time has passed, it looks like she's ready for love again and has seemingly got a pretty good match. Best of luck to you them. They truly are a really cute pair.