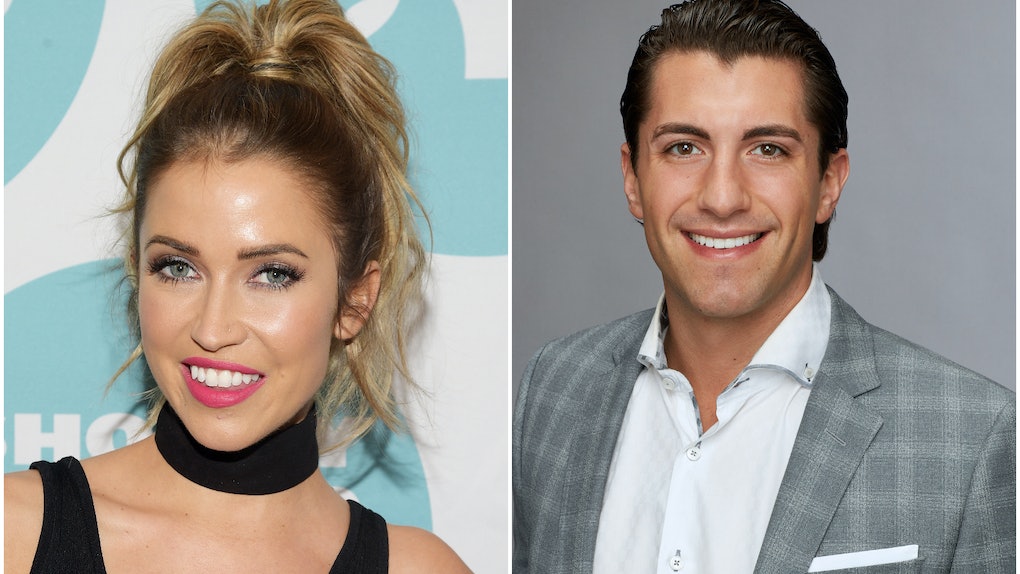 We're still waiting for any believable romance to spark on Colton Underwood's current season of The Bachelor, but other Bachelor Nation alums have definitely encountered Cupid recently. After her breakup with Bachelorette fiancé Shawn Booth, former lead Kaitlyn Bristowe continuously hinted about her new romantic connection to Bachelorette Season 14 contestant Jason Tartick over social media. It feels odd tracking a Bachelor relationship via Instagram rather than from our TVs, but we better get used to it, because Kaitlyn and Jason are now officially dating. Their time together has flown quicker than a Final Rose proposal, but Kaitlyn Bristowe and Jason Tartick's relationship timeline might just satisfy your need for a sweet budding romance.

ICYMI, former dance instructor Kaitlyn met and became engaged to Shawn on Season 11 of The Bachelorette, kicking off a three-year relationship that ended publicly in November 2018. Following months of fans' speculation about their relationship being over, the couple said in a statement, "Even though we are parting as a couple, we’re very much committed to remaining friends. We have both evolved as people, which is taking us in different directions, but with the hope that we will continue to support each other in new ways."

Since the Nashville-based pair split, Kaitlyn hasn't been shy about her interest in Jason, the Seattle banker who emerged from Becca Kufrin's season as a beloved fan favorite. His intense campaign for the Bachelor spot fizzled out, but I think it's safe to say he now has no hard feelings about his buddy Colton getting the gig instead. After some flirty comments on each other's Instagram posts surfaced, Jason guest-starred on Kaitlyn's Off the Vine podcast in early January, prompting Kaitlyn to ask him if he was "finally" going to ask her out on a date. Jason gamely teased that if they were in the same city, he saw "no reason why they shouldn't go to dinner or grab drinks."

Wait, so helicopter rides and picnics on top of a mountain aren't typical first date fare outside of The Bachelor?

The couple then had a series of dates in Denver during which they both posted Instagram Stories of themselves cuddling together. Days later, Kaitlyn and Jason fueled further speculation about their relationship status when Kaitlyn referred to herself as his girlfriend in a Jan. 17 Instagram Story. On her podcast that week, the Canadian danced around the romance rumors, but teased:

The first thing that attracted me to [Jason] was that he seems like a dying breed. They don't make them like him anymore. He's a gentleman. He has the same morals and values as me and we want the same things... He's 30, I'm 33, we both feel established in where we want to be in our lives.

On Jan. 27, Shawn piped in with his thoughts about Kaitlyn moving on during Ben Higgins and Ashley Iaconetti's Almost Famous podcast, claiming that Kaitlyn and Jason actually started dating in November, the same month that she and Shawn announced their split.

"I just have a tough time understanding why she would be putting this out everywhere or blasting it all over the place, knowing that it could hurt [me]," Shawn said about his ex's public display of her time with Jason.

Shawn's hurt feelings are definitely valid and important to consider, but the happy new couple aren't letting his comments get them down. In a TODAY Show appearance on Jan. 30, Jason finally confirmed on the program's recurring "Guys Tell All" segment that he and Kaitlyn were together. With Kaitlyn watching from the wings, Jason revealed that they had been an official item for "about a month or so" after first meeting while recording Kaitlyn's podcast. According to Cosmopolitan, he also reportedly denied Shawn's statement that they had met and began dating last year.

Clearly, following the specifics of a Bachelor Nation's couple relationship is a little trickier when it isn't playing out on TV. But on the other hand, the last month has been a romantic whirlwind for Kaitlyn and Jason, and I'd much rather see a relationship develop this quickly IRL than in the Bachelor bubble. Congrats to these two lovebirds!