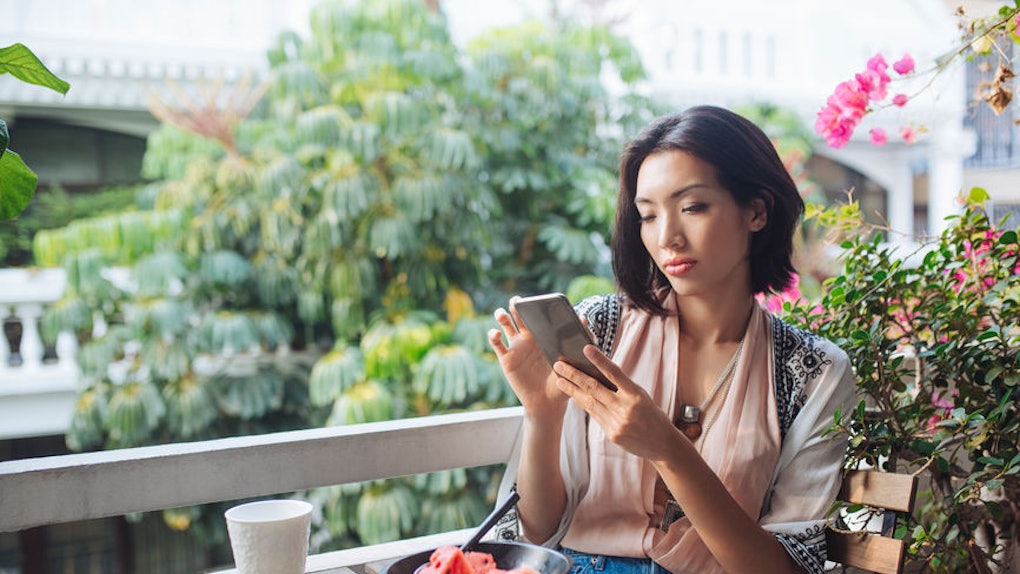 If Your Boyfriend Or Girlfriend Never Texts First, Here's What It Means

Regardless of whether it means confronting an awkward issue head-on or initiating sex, one of the biggest relationship frustrations comes from feeling like you’re always the first one to do something. The same goes for texting, too. When your boyfriend or girlfriend never texts first, it might trigger some insecurities or perhaps just straight-up irritation. Does it mean you're not on their mind as much as they are on yours? Or is texting just not really their thing?

Fret not, however — according to Masini, if your partner never texts you first, that doesn’t necessarily mean there’s anything wrong. For example, bae's job may play a significant role in why they're not sending the first text. You may have the luxury of shooting them a hilarious GIF or randomly checking in during the afternoon just to see how their day is going. However, if they hardly take breaks or work in an environment that gives them limited access to their phone, they’re obviously less likely to reach out (or respond in a timely manner).

Does your boo tend to send short, to-the-point messages over text? When you text about making plans, do they tend to call you instead of responding over text? Have their friends jokingly complained about how bad they are at responding? If so, there’s probably no reason to take their habits personally — they may not initiate conversations over text simply because they don’t enjoy doing so in general. To them, typing out their thoughts and choosing the perfect emoji to accompany them may feel like a chore. Of course, there are situations in which texting is simply more practical — like if you’re trying to lock down plans before you leave work. But your partner may prefer to chat over the phone or in person when it comes to other kinds of interactions.

“Some people are just not natural texters,” says Masini. “They are more about being in the moment and they are all about who and what is currently with them — not what their phone or computer screen is saying or beckoning. This isn’t a fault. It’s just a personality trait. Not everyone takes to texting the same way. And some people find texts impersonal and insulting.”

Another reason why your partner may not be initiating conversations over text is that they’re used to you taking the reins. Basically, if you’re constantly checking in with them, you may just be beating them to the punch. So before you fire off one of your typical messages, give them a chance to send that “good morning” text or post-work text to ask how their day went.

Perhaps the most common fear people have when their partner isn’t taking initiative over text is that they’re just not as invested in the relationship. While this is indeed a possibility, particularly if the person is hardly ever reaching out early on in the relationship, remember that it’s not the only explanation for their behavior.

“When someone you’re with isn’t texting you first, it could be a warning sign that they’re losing interest,” adds Masini. “This is especially true during the first few months of a relationship when the relationship really is not solid — it’s exploratory! You’re both probably feeling different things about each other and the relationship, and either or both of you may even be playing the field. If someone texts you first, the relationship may feel more real and more solid.”

Texting first isn’t the only sign of interest, by the way. If your partner has mentioned being swamped at work or they seem to be averse to texting in general but are still making an active effort to spend quality time with you, there’s no reason to panic about the fact that they aren’t texting you first. That said, if it’s really bugging you, you can definitely do something about it.

“Don’t assume your partner knows you’re frustrated,” says Masini. “Articulate your needs and your expectations. Let your partner know how lovely it would be to hear from them first when texting. You may be surprised to know they didn’t even realize this was ‘a thing’ for you!”

It’s best not to expect your partner to automatically understand your needs in this regard. Masini advises keeping in mind that your partner may need some specific direction, especially if they’re not really an avid texter by nature.

“If you tell your partner that you’d like to hear from them first, you may not get results that are as successful as if you tell your partner that you would love to hear from them before 10 a.m., or before you go to bed at night — or something specific,” Masini explains. “You may be surprised to learn that your partner doesn’t understand exactly what you want, intuitively, even though you think they do. Then, give them at least a week to make a change. You’re asking them to do something that they may not naturally do.”

Hopefully, once they know that a simple text to say “good morning” or ask how your day is going will make you feel good, they’ll make more of an effort to be the one to reach out first. That said, Masini stresses that at a certain point, you may need to accept that your partner simply doesn’t have the same texting instincts as you do.

“If you need a lot of texting attention, look to friends and family,” she advises. “Sometimes a great partner isn’t everything at every moment, and if all else is going well, but your partner never texts first, let yourself be the one to do the adjusting.”

That’s not to say you should suffer in silence if bae’s texting habits are bothering you. The best thing you can do is bring it to their attention, and then hang back and give them a chance to initiate. They may not have even noticed that you’re always the first one to text, and if they know it’s upsetting you, they’ll hopefully be willing to make more an effort. Try to remember that while it may be annoying AF that your boo never texts you first, it doesn’t necessarily mean they’re less invested in the relationship than you are. If their texting habits have stoked some deeper insecurities about your relationship, it might be worth exploring what fears are at play. Otherwise, remind yourself of all the other ways bae shows they care.

More like this
If Your Date Cancels At The Last Minute, Here Are 20 Lines You Can Use
By Corinne Sullivan
90 'High School Musical' Series-Inspired Group Chat Names Meant For Wildcats
By Rachel Chapman
15 Texts To Send Your Friend With Benefits Before Bed To Keep Things Hot
By Rachel Shatto
Stay up to date