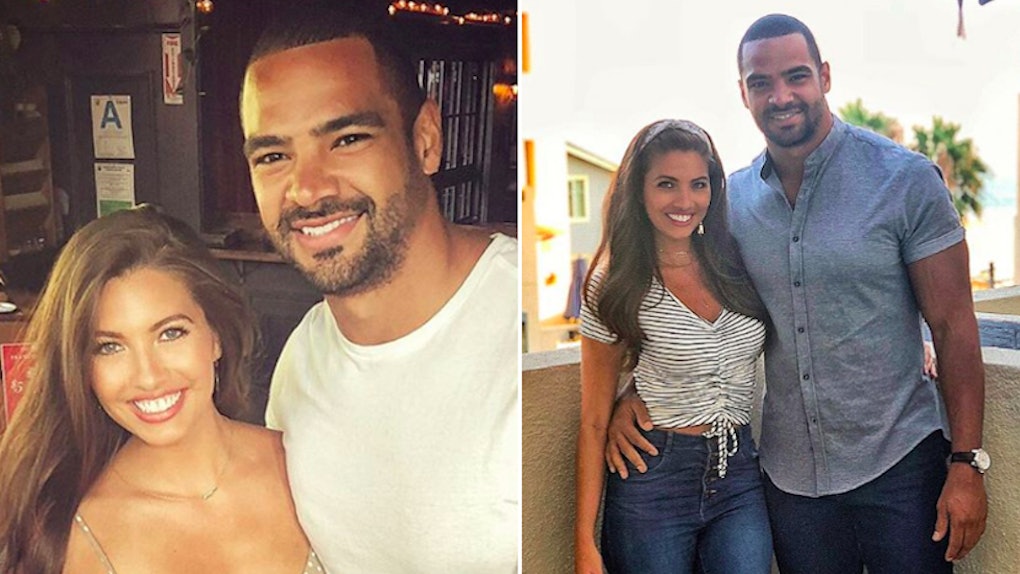 Not everyone ended up with a happily ever after the last season of Bachelor In Paradise. After dating for pretty much the entire summer, Angela Amezcua got dumped by Eric Bigger at the end, which was a major bummer. But don't go feeling sorry for her! Because the cast of Bachelor Nation all seems to be pretty tight-knit, it's no surprise that Angela ended up snagging a Bachelorette alum in none other than Clay Harbor, the professional NFL player who left Becca's season after suffering a wrist injury during a group date. Clay Harbor and Angela Amezcua's body language speaks volumes about their chemistry, and you guys? It's so sweet.

These two aren't the only couple to make it out of Bachelor Nation. As we've seen over the years, plenty of couples have found love on the hit ABC show, including Sean Lowe and Catherine Giudici, Jade Roper and Tanner Tolbert, Evan Bass and Carly Wadell, and most recently, Lauren Burnham and Arie Luyendyk Jr. But Clay and Angela are the first couple who appeared on the same show, albeit not the same season. (Well, unless you're counting the rumored romantic relationship between Peter Kraus and Bibiana Julian. But that's a whole different story.) The point is, don't discount the franchise's ability to play matchmaker, even when the couple wasn't on the show at the same time. It works! The proof is in the pudding.

According to their body language, Angela and Clay are super into each other. The two were introduced by Chris Randone, a contestant who knew Clay from Becca's season of The Bachelorette and then later appeared on BIP with Angela. He ended up engaged to Krystal Nelson. After Clay left Becca's season of The Bachelorette early and Angela left BIP heartbroken, Chris worked some sort of Bachelor Nation magic and brought these two together. And bless him, because the body language between them indicates that they were clearly meant to be.

1. When they started dating, they were super into each other.

In this Instagram post from September 2018, which was Clay's announcement that the two were officially dating, they were feeling connected. "See how they're leaning into each other and his hand is all the way around her, holding her tight?" body language expert Traci Brown tells Elite Daily. "Don't anyone take his woman!"

In Angela's Instagram post announcing their relationship, the two are also super close. "Here he's wrapping her even tighter, and she's doing the same," Brown explains. "They're gently turned toward each other and seem like they're glued together."

In this photo posted by Clay, they two are cozied up together and definitely look happy. According to Brown, their body language also indicates that they're connected intimately.

"We don't see big smiles from him that much, but we do here," she says. "He may be a little happier than her — see how his right thumb is in his pocket? That says he thinks he's really cool and the rest of his hand is pointing to his private parts, so he's working on getting lucky tonight. And she's just as relaxed as she can be about the situation with her arms to her side and fingers slightly curved."

4. And they seem pretty consistent.

Even when the couple is more casual and relaxed, you can still feel the love. "Here they are in that familiar pose," Brown describes. "About the same intensity of smile and glued together. It's a good thing they're rooting for the same team! That always helps relationships."

5. But they aren't perfect.

In this photo, Brown says that they don't look as connected as they have in the past. "He's got a lot more tension in this pic. Notice how he's just barely able to smile," she says. "And his right hand is pretty stiff. She's working it for the camera trying to look sexy accenting her hips by bringing her knees in. This isn't their most fun moment."

6. They enjoy each other's company and they're definitely in sweet, sweet love.

While the previous photo might not have made them look super happy, this one sure does! "It's nice to see them be able to play around instead of just posing for the camera," Brown says. "He's having a good time with that genuine smile of his. We can't see her face but the rest of her body is totally into him."

Clay and Angela might have been an unexpected couple, but that doesn't make their love story any less sweet. "These two are in love for sure," Brown says. "I see an amazing amount of consistency in their energy for each other through these pics. And that's pretty cool for a TV couple."

Ugh, is your heart melting yet? Because mine is. It's clear that Clay and Angela didn't need cameras to find paradise, because they found it in each other. I'm not crying, you're crying!