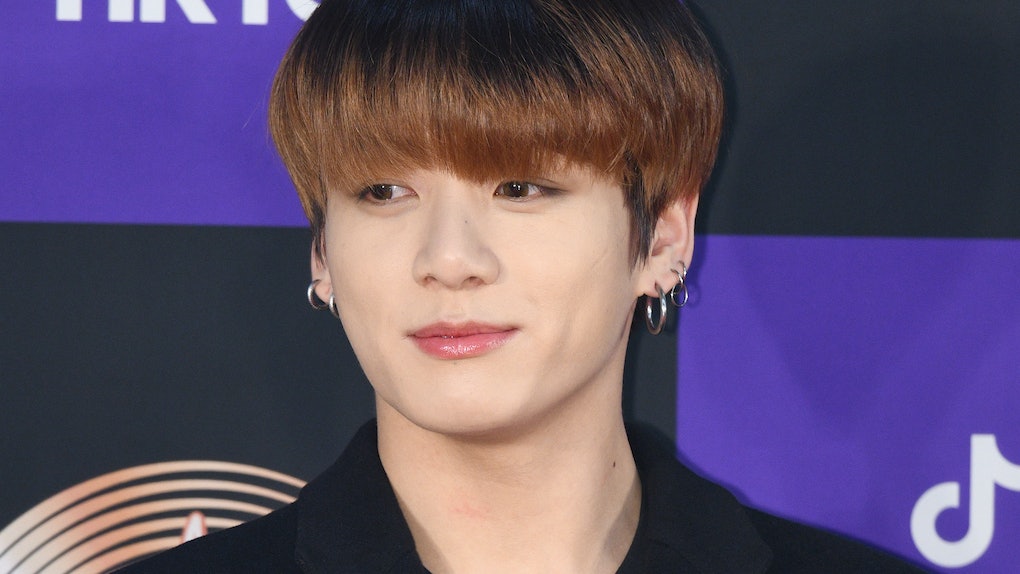 BTS had a big 2020, releasing tons of new music as a group, but there's the added possibility a few members will drop mixtapes at some point, too. As fans know, the guys enjoy branching out and experimenting with different projects as individuals. While they've all worked on songs outside of BTS, RM, Suga, and J-Hope are the only members who've dropped mixtapes so far. Jungkook has been teasing that he has one in the works for a while, and fans are so excited to finally get to hear sometime in the future. Here's everything ARMYs need to know about BTS' Jungkook's 2020 mixtape, which was expected to drop in 2020 but now will likely be released in 2021.

Jungkook first mentioned his mixtape in a May 2018 interview with Buzzfeed, and fans have been waiting patiently (read: anxiously) ever since. But after realizing how long the process would take creating an album alone, he told fans not to expect it any time soon. "I’m not at the level of skill yet where I can release a mixtape on my own. I’ll practice more and try harder," Jungkook explained during a Map of the Soul: Persona press conference in April 2019.

Although Jungkook has confirmed he's still busy working on his solo work, fans still have so many questions about the album's details. If you're curious, here's everything to know about the project so far.

Following BTS' extended vacation from August to September 2019, Jungkook revealed during a Sept. 27 VLIVE his mixtape was supposed to drop already, but he delayed it. "I’m also working hard, producing. At first, I wanted to share it right after the break ended, but I wasn’t pleased with it," Jungkook said.

The next time he updated fans about his process was during an "AskAnythingChat" session in November 2019. He teased the album was reaching its final stages, but he still wasn't satisfied with it. "I'm working on it, actually I recorded all the songs but I need to record them again... so I'm trying to release one song first rather than the mixtape," Jungkook said.

Jungkook's Music Videos For His Mixtape

In his BE-hind interview on Saturday, Feb. 27, 2021, Jungkook got more specific about his mixtape than ever, revealing his vision for the visuals accompanying the new tracks. Jungkook said he envisions the mixtape having three main songs, which he will turn into three videos that each feature a distinct style of dance.

In that same interview, Suga, who revealed he's also got a mixtape coming, offered Jungkook some helpful advice. Suga knows Jungkook can be a perfectionist when it comes to recording songs, so he urged him to just release his already. "I guarantee that if you edit it in that way, you won’t end up releasing it," he said. "Even if you’re going to regret it, you have to release it and then regret it."

Jungkook insisted he wanted his debut solo release to be perfect for fans and that's why he was considering sharing a few songs at a time first. "No no, so rather than calling it a mixtape, I’m planning on releasing the songs one after another within a short time frame," he explained.

In an April 25 livestream, Suga said he's heard Jungkook's mixtape and told fans it will definitely be worth the wait. "For the people who wait, there’s going to be a big blessing. It will come," he teased.

A Sneak Peek Of Jungkook's Mixtape

Jungkook gave fans a first taste of his record on Aug. 31. 2019 — a day before his birthday on Sept. 1 — when he gifted fans with a preview of an original song called "Decalcomania."

"This... please look forward to it," Jungkook teased.

Jungkook hasn't given fans an exact timeline for when his solo project will drop. His mixtape has been two years in the making, so ARMYs' expectations are definitely high. Fans hope it arrives sometime this year, but they'll understand if Jungkook decides to release it later on in order to get it just right, especially because in a Nov. 20 letter to fans, he revealed the project is still not at the place he wants it to be.

"The mixtape seems to be constantly delaying as each day goes. I want to keep perfecting it. I'm really sorry. I'll try do it as soon as I can. Still, as you guys constantly keep waiting for it and supporting it. It gives me a lot of strength and makes my heart beat," Jungkook wrote in his thank you note to ARMYs as part of the BTS BE album.

On the same day, he also admitted "Stay" was supposed to be the final track on his mixtape, but in the end, he put it on BTS' BE album. If "Stay" is anything to go by, Jungkook's mixtape is going to be amazing.

Because RM and J-Hope released their mixtapes when fans least expected, Jungkook's can literally come any day, so fans just need to be prepared for anything.

This article was originally published on May 21, 2020

More like this
Do The BTS Members Have Personal Instagrams? Here's What Baby ARMYs Need To Know
By Michele Mendez
Taylor Swift & Olivia Rodrigo's Friendship Timeline Will Make Your Heart Grow 3 Sizes
By Brandy Robidoux
These Tweets Comparing SuperM's "We Do" To BTS' "Dynamite" Video Are So Split
By Michele Mendez
Stay up to date