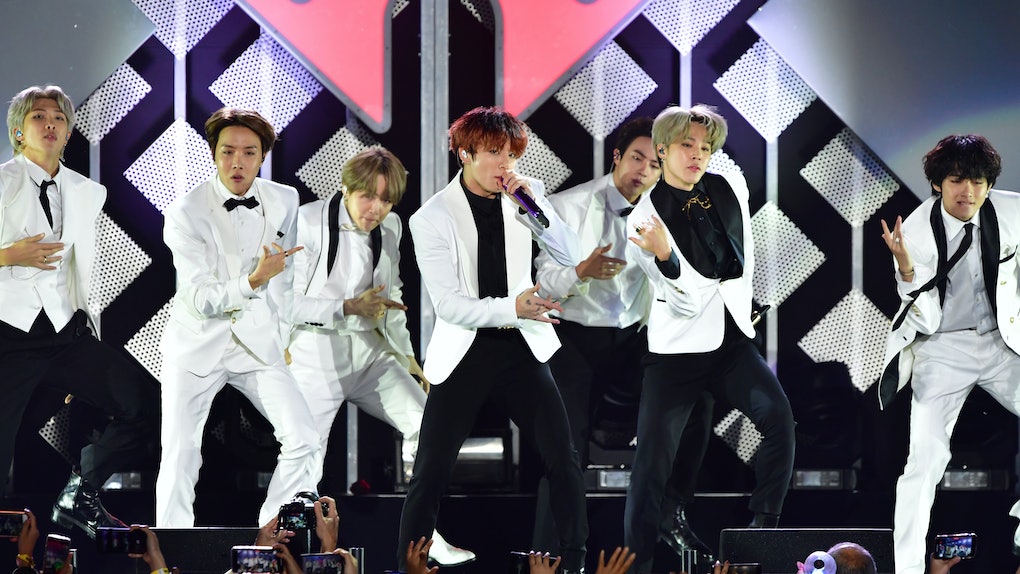 When Will BTS Drop Their Mixtapes? Here's What They've All Said

The ARMY is always on their toes thanks to BTS' habit of dropping surprise solo songs, covers, and collaborations. Since the members have mentioned they're working on solo music, fans are keeping their eyes glued to BTS' social media pages wondering who will be the next member to drop a mixtape. Suga and Jungkook have both revealed they definitely have projects in the works, while other members, like Jimin and V, have only teased the idea. Regardless of how much info they've shared with fans, the ARMY is wondering when BTS will drop their mixtapes.

For what it's worth, all the members of BTS are constantly working on music. It hasn't been too long since RM and J-Hope dropped their mixtapes (J-Hope dropped Hope World in March 2018, while RM released Mono that October), so it will probably be a while before they release more. As for Jin, he's released a few solo songs over the years, but never a full mixtape, and there haven't been any hints that one is coming. Still, that doesn't mean he's not working on anything behind the scenes.

In the meantime, here's everything we know about projects that are in the works and when they may drop.

Suga released his debut mixtape, Agust D (named after his solo persona), in August 2016. In the four years that followed, fans begged for an update on his follow-up album, and in November 2019, they finally got some more information.

In the fourth season of BTS' vacation series Bon Voyage, Suga revealed that, while BTS was taking their extended break earlier that year, he finished his mixtape. Before fans could celebrate, Suga admitted he still needed to make a few tweaks to the album before he was finally ready to put it out into the world. "I still have to arrange and record the songs," he said.

Watch Suga talk about his upcoming mixtape below.

Finally, on Friday, May 22, 2020, Suga released the ultimate surprise for ARMYs: His second mixtape, D-2. The project included 10 tracks, including features from RM, MAX, and Kim Jong Wan. Suga released a music video for his lead single "Daechwita."

While Suga is two mixtapes into his solo career, Jungkook has yet to release one, but he told fans he's definitely working on it. At an April 2019 press conference for Map of the Soul: Persona, Jungkook explained it will be a while until it's fully complete.

"I said last year that I was going to release a mixtape. I want to sincerely apologize to our fans. I’m not at the level of skill yet where I can release a mixtape on my own. I’ll practice more and try harder," Jungkook said.

Hear Jungkook talk about his mixtape around the 1:23:38 mark below.

Jungkook gave fans another update in a September 2019 livestream, explaining he was busy with the production side of the album. "At first, I wanted to share [my mixtape] right after the break ended, but I wasn’t pleased with it," Jungkook said, according to a fan translation by @doyou_bangtan.

Since then, Jungkook has revealed he's "recorded all the songs," but like Suga, he needs to make some final adjustments before he shares the whole project with fans. So that could come any day now, too!

The reason why fans think Jimin is working on solo music is all thanks to a comment TXT's Yeonjun made during a March 28 livestream. "I’ve seen Jimin a lot recently at the studio. He was working on something, and he was using the studio that I use," Yeonjun said. To be fair, Jimin could have been recording for anything (RM recently revealed BTS is working on a new album as a group, for example).

But based on Jimin's comments during the Map of the Soul: 7 - The Journey Japanese special that aired on July 5, he's definitely working on something solo. According to a translation by @MiniMoniT_T on Twitter, the "Filter" singer hinted he was focused on preparing something for fans as they wait for the boys to get back to touring.

"It’s difficult to explain in details but as I’m looking for things that I’m able to show you during this situation, I’ve also been preparing this and that. Even as I’m resting, I’m thinking of when we’re able to do concerts in the future," he said.

Fans are crossing their fingers that "this and that" is Jimin's 2020 mixtape!

V told RM in a March 6 livestream he recently wrote "three songs" and he's really enjoyed writing the lyrics. "I was able to actually feel the life of songwriters," he said.

Of course, one of those tracks ended up being "Sweet Night," which was featured in the hit JTBC/Netflix K-Drama Itaewon Class. He hasn't said anything about the other two songs' release dates just yet.

V went live on YouTube on June 9 and shared more details about his mixtape, revealing it will include about eight tracks and that he hopes to release it by the end of 2020.

V welcomed July by taking his mixtape teasing a step further, taking to Twitter to post a 40-second clip of a gorgeous solo track likely to appear on his mixtape.

There are still no hints as to whether RM, J-Hope, and Jin will be dropping mixtapes any time soon, but that doesn't mean they don't have anything in the works secretly. ARMYs know to always expect the unexpected.

This article was originally published on April 21, 2020

More like this
Here's How To Pre-Order BTS' "Butter," Since ARMYs Want Their Biggest Comeback Yet
By Michele Mendez
As @Royal_Suitor, Here's Why I'm Dedicated To Defending Harry & Meghan
By R.S. Locke
Here's How To Stream Scott Patterson's 'Gilmore Girls' Podcast, 'I Am All In'
By Abby Monteil
Stay up to date