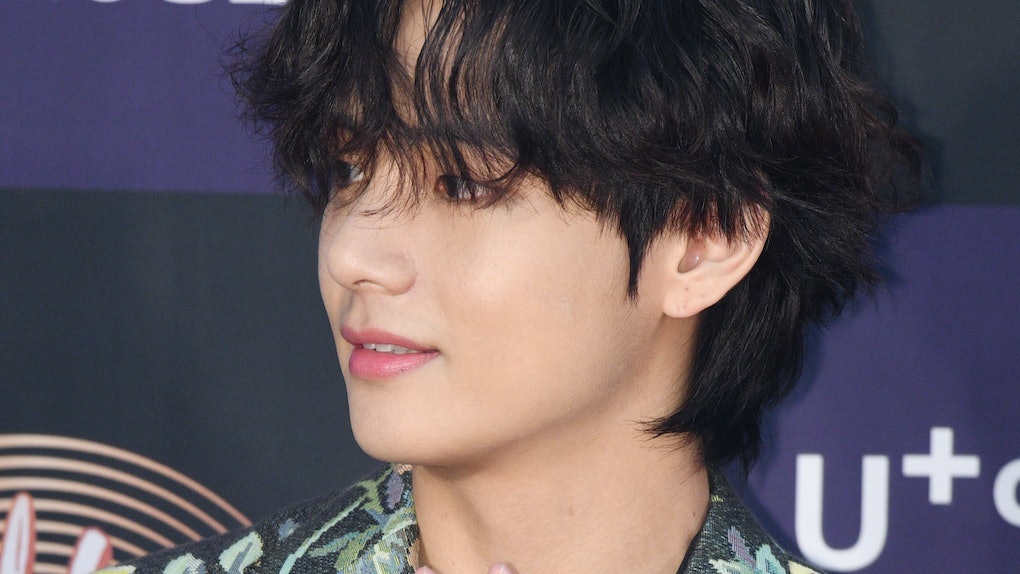 BTS' V has been teasing his plans to drop a mixtape on social media for months, and he welcomed July with a special gift to fans: another much-appreciated preview of what's to come. BTS' V teased a new solo song on Twitter, and even though the clip is just 40 seconds long, it'll rip your heart out and piece it back together again. The lyrics, which are in English, are that emotional.

V shared the snippet of the currently-untitled solo track on July 1 with the message, "Today's a day where I miss ARMY so so.. so so much. Although not complete, please wait and listen to this spoiler!" according to a translation by @Charts_K. He warned fans to listen to the song quickly, because he might decide to delete it later. (And, sure enough, he did.)

Worst was given to me from the heart of the loveless / I play the games, fixed the puzzles, though I'm missing peices / And I act like my life is just perfect / But behind this smile, it really hurts me / I'm trying to save my life, saving myself with an umbrella...

Check out the whole clip below, courtesy of an ARMY who captured it before it was deleted.

The track teases bluesy instrumentals reminiscent of V's Love Yourself era solo, "Singularity." Now fans are in their feels over how amazing V's vocals complement the music. But most of all, they're loving the emotional, vulnerable story behind the lyrics.

Shortly after dropping the sneak preview, fans got "Kim Taehyung" and #KTH1IsComing trending worldwide. V went live on YouTube on June 9 and shared some details about his mixtape, revealing it will include about eight tracks, and fans are more excited than ever to hear them now that V has shared this snippet.

Fans won't have to wait all that long, because V teased he'd most likely drop the mixtape by the end of 2020. Sit tight in the meantime, ARMYs!

More like this
Demi Lovato & Ariana Grande's "Met Him Last Night" Lyrics Focus On Toxic Love
By Brandy Robidoux
Is Saweetie's "See Saw" About Quavo? The Lyrics Are Brutal
By Corinne Sullivan
Are BTS & Coldplay Collaborating On A Song? Here's Why Fans Think It's Happening
By Michele Mendez
Stay up to date