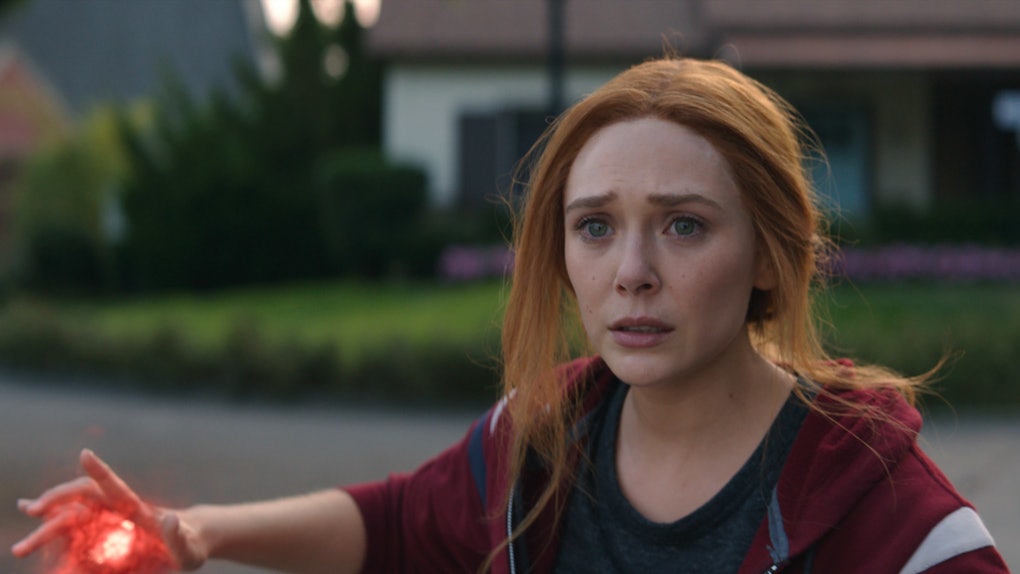 9 Unanswered 'WandaVision' Questions Fans Have After The Finale Episode

WandaVision went out with a bang, as the nine-episode series closed with a typical Marvel CGI fight scene. But even though Wanda and Agatha battled it out and Hex Vision sparred with White Vision for Vision Supremacy, the show stayed true to its heart, focusing on Wanda's grief and love for her family throughout. After Wanda closed down the Hex and let the residents of Westview return to their lives, she said goodbye to Vision and her children and left New Jersey to start her life anew. But these unanswered WandaVision questions are proof the show's ending didn't tie up everything so neatly.

Fans are especially frustrated by some of these loose ends because WandaVision isn't on track to have a Season 2. Marvel CEO Kevin Feige told reporters he never says never when it comes to the potential of future Marvel projects, but he also said the show was developed as a one-and-done limited series for TV.

Instead, the plan was for WandaVision to lead in to Marvel's main attractions: the movies. If not for the coronavirus pandemic, WandaVision would have been directly followed by the premiere of Doctor Strange & The Multiverse of Madness and Captain Marvel 2. Of course, COVID-delayed movie releases have kind of messed that all up, so the show leaves several open-ended plot threads while fans wait for the follow-ups.

Let's run down all the major loose ends:

1. What Happens To Agatha Now?

Agatha's big revelation in the final episodes of WandaVision was that, despite her "Agnes" persona, she was never under Wanda's control and was instead trying to take Wanda's powers from her. When Wanda won their battle in the finale, she cursed Agatha to remain the nosy sitcom neighbor character Agnes for, presumably, eternity. So now, Agatha is essentially trapped in her own little Hex that doesn't go beyond the boundaries of Agnes' mind.

Does this mean Kathryn Hahn is done in the MCU? One of Agatha's last lines to Wanda was, "You're going to need me," so perhaps not. But at least Wanda put Agatha someplace where she can easily retrieve the witch if necessary — and where she cannot harm anyone else in the meantime.

After weeks of speculation about Evan Peters' character in WandaVision, it turned he was not the connecting link between the MCU and Fox's X-Men franchise. Nor was his presence heralding a Mutant Invasion for Marvel movies. Agnes' "husband," Ralph, was just Wanda's next-door neighbor, a wannabe actor who Agatha had taken hostage so she could live in his home.

But Ralph also sends a message to fans asking if the X-Men actors from Fox's films will reprise their roles in the MCU. In this version of Marvel's reality, the guy who looks like "that other Quicksilver"? He's just an actor. He was a "fake Pietro," just like those others at Fox were, in this world, fake X-Men.

3. Who Was Jimmy Woo's Witness?

It was the search for a missing person under FBI (and Jimmy Woo's) protection that alerted S.W.O.R.D. to Wanda's Westview project in the first place. The most infuriating loose end left in WandaVision is that viewers never learn who that witness was. Fans theorized it would turn out to be Agatha or Ralph, but the finale had fans scratching that idea off their list. Another fan-favorite suspect was Dottie; fans noticed Woo's research never revealed a "Westview resident" counterpart to her "WandaVision" sitcom character, so it could be her.

Regardless, it seems like Jimmy Woo is not revealing his sources. But then again, the point of someone in a witness protection program isn't to out them, is it? Woo's just doing his job.

In the WandaVision finale's mid-credits scene, Monica is invited by a Skrull to go... *gestures upwards.* This is obviously a lead-in to the upcoming Captain Marvel 2.

But it also ties back to the post-credits scene in Spider-Man: Far From Home, where fans learn Nick Fury isn't on Earth. He's vacationing on a Skrull ship up in space. Monica wasn't invited up by just anyone. The man asking to see her is Fury.

What does that mean for Monica's future? Beyond her newfound powers, S.W.O.R.D. is now in need of a new director. And the man in charge just asked her to pay a visit...

5. Where Did White Vision Go?

At the end of their fight, Hex Vision transferred his memories to White Vision, who experienced all of Vision's memories together with Wanda. Having then assessed the situation properly, White Vision did what the real Vision would do: the decent thing. He let Hex Vision go and left. But nobody knows where he went.

So does that mean White Vision will be back? (And will he be red if he does return?) That's not clear, but in Wanda and Vision's final moments together, they agreed one day they may say "hello" to each other again, so fans shouldn't count him out.

Speaking of Wanda's family perhaps returning one day, what is up with Billy and Tommy? When Wanda let go of the Hex, they began to break into pieces, proving the twins were creations made by Wanda's chaos magic. But their spirits were not something she could just conjure up. Wanda acknowledged this in her final words to her boys: "Thank you for choosing me to be your mom."

So although their bodies disappeared with the Hex, it seems like their spirits are still out there. If fans are right about the voices Wanda heard at the very end of the finale's post-credits sequence, they are calling for help, perhaps from another dimension.

Speaking of that post-credits sequence, what exactly is Wanda doing? Why is she in a cabin in the mountains drinking coffee while another version of her is reading Agatha's Big Bad Book of Spells (aka the Darkhold)?

Known as the Book of the Damned, the Darkhold turned up in Agents of S.H.I.E.L.D. and The Runaways. The book dates to a time before Atlantis sank and has been used by multiple villains over the centuries. In Agents of S.H.I.E.L.D., it's hinted that Nick Fury was looking for it. And now it's in Wanda's hands, and she's studying it, including the entire chapter on herself, the Scarlet Witch. What she learns remains to be seen.

Where Wanda's studying also may provide a hint. Although the area is never identified, fans of the Fox X-Men films are pretty sure it's the same location many a mutant has fled to, Alkali Lake.

Until the MCU identifies those mountains, it could just be a coincidence that Wanda turned up there. But it seems hard to believe Wanda, who has mutant origins in the comics, wound up somewhere that looks an awful lot like the same spot seen in films like X-Men Origins: Wolverine and X-Men: Apocalypse by sheer accident.

9. Will There Be A 'WandaVision' Spinoff Show?

Feige already said there's no Season 2 currently planned, but what about a spinoff? The finale's mid- and post-credits scenes clearly set up Wanda and Monica to go on to large-screen adventures. But what about Jimmy Woo? What about Darcy? Could WandaVision spawn a spinoff of Marvel's FBI X-Files? Or could Wanda's next appearance in Doctor Strange 2 lead her back to Agatha and Westview? Time will tell.