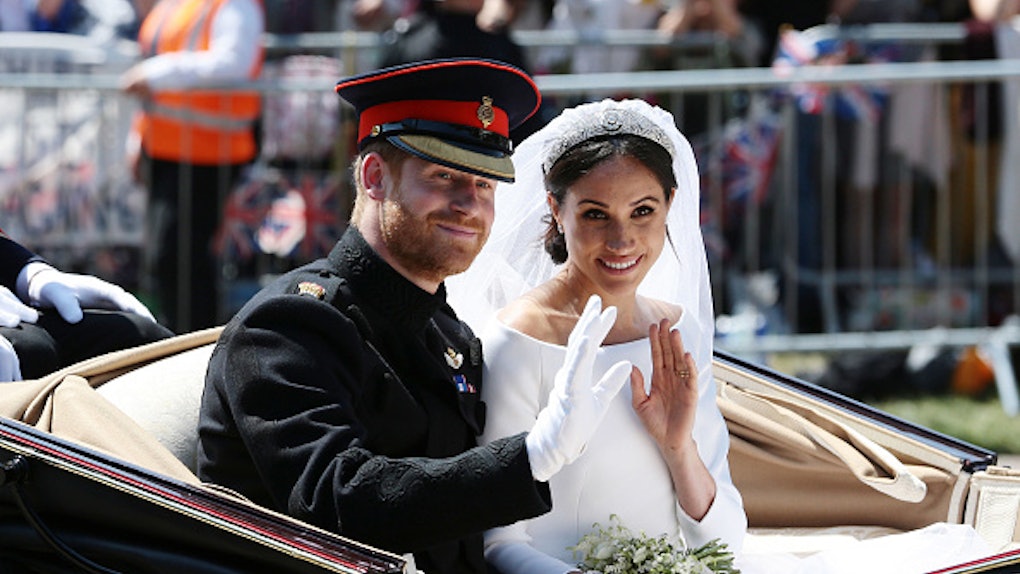 While it may seem that on the surface Prince Harry and Meghan Markle have a picture-perfect fairytale romance, they're actually a normal couple underneath all of the glamour of royalty. From thoughtful gifts in the beginning of their relationship to their mixed-tradition wedding, this new royal couple has lots to show us everyday citizens what a strong relationship looks like. There are plenty of love lessons Harry and Meghan can teach us if you look closely.

The two began dating in 2016, and while the early start of their relationship was kept mostly on the down low, Harry made a supportive statement soon after they went public to show that he stands by his girlfriend completely and will not tolerate any racist coverage of her in the press. And while there certainly have been some rocky moments for this couple since 2016, they've shown that they're in it for the long haul — they want to stick together, support each other, and stay by one another's side. Check out some of their love lessons you can apply to any non-royal (or royal! Get that crown!) relationship of your own, because we can all learn from one of the world's most beloved couples.

They Always Stand Up For Each Other

When Meghan was racially harassed by news publications after news of their relationship first broke, Kensington Palace released a statement on behalf of Harry to stand up for her.

"His girlfriend, Meghan Markle, has been subject to a wave of abuse and harassment," the statement reads. "Some of this has been very public — the smear on the front page of a national newspaper, the racial undertones of comment pieces; and the outright sexism and racism of social media trolls and web article comments."

Later in the statement, it says that Harry is "worried" about Meghan, and "is deeply disappointed that he has not been able to protect her."

They're Comfortable Showing PDA When It's Appropriate

When the royal couple announced their engagement, the two linked arms, held one another, and weren't shy at all in showing their love. They, of course, kissed multiple times on their wedding day, and have been showing their affection ever since. Feel free to take a cue from this couple and show your love for your SO when appropriate for you, too.

One thing that's important for any two people in a relationship is bringing both of their backgrounds and traditions into the pairing. At Harry and Meghan's wedding, they combined his royal traditions with a more soulful American preacher and gospel choir for Meghan's family to make for a beautiful ceremony that represented the both of them.

They Help Each Other Out

Since Meghan is new to the whole royal thing, it makes sense that Harry helps his new wife with some of potentially confusing customs. Earlier in the summer, Meghan asked Harry when to curtsy to the queen, and he made sure she knew when the timing would be right. Your partner helping you out with customs that are foreign to you but natural to them is key to any relationship.

They Show Their Love Through Little Gifts For Each Other

Early on in their courtship, Harry purchased a one-of-a-kind print set for Meghan, according to People. Even if your love language isn't receiving gifts, it's still nice to get a little present from your loved one every once in a while.

They Have Nicknames For Each Other

Instead of just calling her redhead SO "Harry" or — cringe — "the Prince," Meghan revealed at a charity Hamilton performance a couple of weeks ago that she actually goes for a sweeter way to reference her husband. She calls him "my love." I'm sure her love has an equally beautiful nickname for his wife, as well. Nicknames are a loving way to have a special name for your SO that only you call them, so definitely take notes from the royals on this one.

They Lean On Each Other During Hard Times

While Meghan and Harry are settling into married life, her estranged family members continue to stir the pot. Despite the family drama, Harry has been Meghan's main source of support during the controversy, and has introduced her to his friends so she has a wider circle while she lives in a new country as well. One of the most important things about being in a relationship is that that person is your partner, and Harry and Meghan have certainly showed that they're partners throughout this wild ride of life.

Check out the “Best of Elite Daily” stream in the Bustle Appfor more stories just like this!