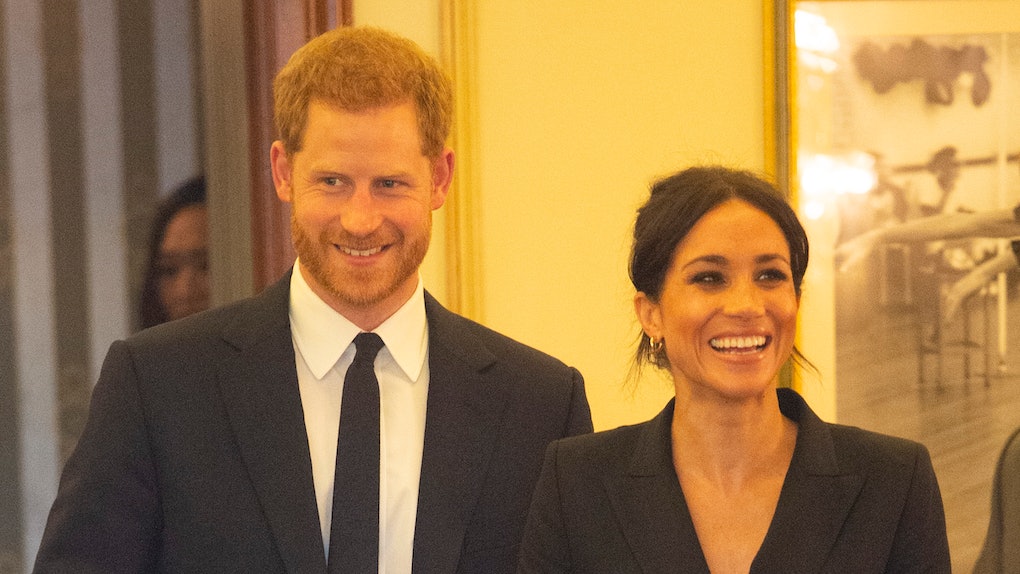 The Duke and Duchess of Sussex hit up a special charity performance of the musical Hamilton on Aug. 29. The gala event benefited Sentebale, Prince Harry's organization that helps young people affected by HIV, and man I really wish I could have been there because so many cool things went down on this epic date night. For starters, Harry took the stage to thank the cast and crew, and then briefly sang the tune "You’ll Be Back" from the show. I know! Then later, the duchess revealed her nickname for him, and OMG you guys, Meghan Markle's nickname for Prince Harry is actually the cutest, most intimate thing you'll ever hear. Like, for real.

Sidebar: I am SO not jealous of this relationship at all.

What happened was this: Harry and Meghan — who, BTW, was wearing the coolest tuxedo-style dress I've ever seen — rolled up to the stage to join the whole cast of the show for a photo sesh. Meghan was standing in front of Harry and, apparently, she was worried about blocking the Prince's view. Because she then turned around to check on him, and it looks like she says something along the lines of — SWOONFEST ALERT! — "Can you see, my love?"

And yes, there's a video of this entire endearing moment, and I may or may not have watched it more than 30 times in the last half hour:

How freaking adorable are they? And how cool is it to get such an unrehearsed glimpse into their relationship?

Meanwhile, the pair attended the musical with none other than Lin Manuel Miranda — you know, with the guy who wrote it — because of course they did. Check it out — that's him right there on the right:

After the performance, Prince Harry thanked the Tony Award winner from the stage.

"Thank you to Cameron Mackintosh productions, to the show’s creators Thomas Kail and of course Lin-Manuel Miranda," he said. "A round of applause for yourselves for taking part in this evening’s activities because you have, together, raised a huge amount of money to change the lives of thousands of children in Botswana and Lesotho. And through that work that we’re going to be doing now, we will be able to stop the generational hand down of the stigma around HIV."

The speech came right on the heels of Harry's surprise performance of "You'll Be Back," which Miranda appeared to be really into. Watch him stomp his foot along to Harry's vocals in the clip below:

Someone needs to make a meme out of this ASAP.

Meanwhile, according to People, this was not the first time the couple took in the show.

"We saw it back in January, February and thought it was incredible," Meghan reportedly explained during a post-show cast meet-and-greet. "Harry loved it, it was the first time he saw it, and now he can’t stop singing the songs!"

"The first time round [I saw the show] I was laughing so much," Harry added. "Just fantastic."

FWIW, I would pay good money to see these two driving around London while belting out hits from the show. Maybe even more than I'd pay to see the actual musical itself.