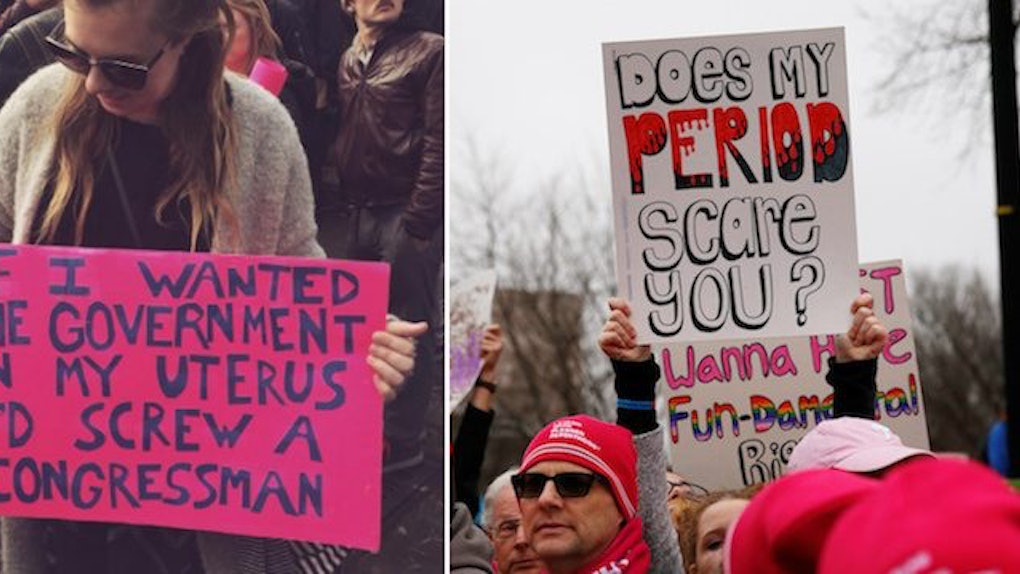 20 Of The Most Powerful Signs From The Women's March

After the results of the 2016 presidential election stunned many all over the world, women everywhere are rightfully refusing to sit silently as a racist, sexual assailant attempts to control the lives (and bodies) of women and minorities.

So today, January 21, thousands of women have gathered in Washington DC for the Women's March on Washington to protest the election and subsequent inauguration of President Donald Trump.

When the idea of the Women's March was first conceived, the movement soared in popularity, and now, marches have been organized, not just in other areas of the US, but around the world.

Despite multiple marches taking place, however, women from across the country have made the trek all the way to DC for the main march, with several airline flights almost completely filled with participants.

While the turnout is absolutely inspiring and essentially historic, the swelling crowd numbers actually presented a problem for March organizers, who were worried the crowd became too large to formally march.

However, that didn't stop women from sending several pointed messages to Trump and his administration.

Thousands of women in DC (and in other areas of the US) have channeled their frustration, anger and sadness into powerful signs and messages expressing their refusal to stand down in the face of a Trump presidency:

Though Donald Trump is president of the United States, his messages of utter hate and misogyny affect the treatment of women everywhere — not just on US soil.

To express their support of women as a whole and their disdain for a world leader who objectifies, belittles and assaults women, Women's March protestors from other parts of the world also have messages for Donald Trump.

Basically, the universal message is this: The nasty women of the world will not go quietly:

If there's one thing these photos prove, it's women will never relinquish control of our thoughts, voices and opinions to anyone — especially to Donald Trump.

Today and everyday, this pussy grabs back.