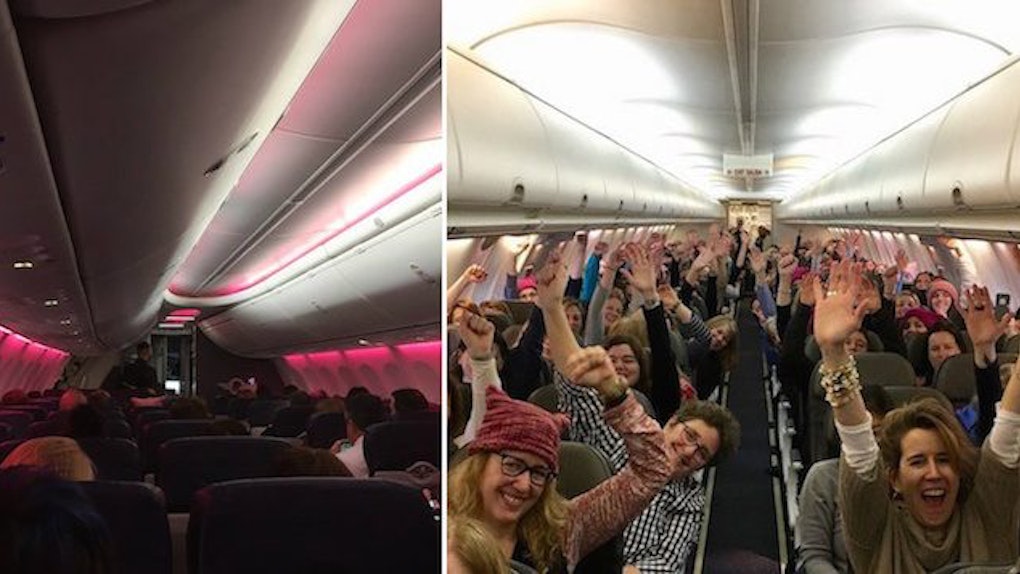 Flights To DC Are Completely Full Of Women For The March

Women from across the country are making their way to Washington, DC.

No, they're not going to see the inauguration of Donald Trump.

They're going to participate in the Women's March on Washington.

The march is looking to exceed the poorly attended inauguration in terms of numbers.

It was confirmed last week that there were six times more permits for buses for the march on Saturday than there were for the inauguration on Friday.

Women are also heading down on trains.

But women are also making a notable dent on airplane travel this week as they gather for the march.

Multiple women have reported being in airplanes heading to the nation's capital filled with women all doing the same thing.

And it's not just unconfirmed musings that there are more women than usual on flights, proportionately speaking.

Women are chanting and cheering for the march as they travel in the air to DC to protest Trump's election.

Women are coming together in solidarity as they make their way to DC.

Women seem pretty happy to be together in this show of unity, supporting the rights and values of women.

And the airlines seem to be getting pretty into it, too.

That flight was going from Chicago to Washington, DC.

Southwest said this wasn't a company-wide initiative, just a fun little perk for that particular flight. A spokeswoman for the airline said,

While we're unaware of details surrounding specific flights, our flight crews celebrate, commemorate, acknowledge and share in special moments with our customers all the time. Some of our aircraft are equipped with mood lighting and while this was not a company-wide initiative, at times, our flight crews will adjust the lighting for a customer or group of customers traveling on their flight.

If you're unable to hop on a flight full of women to DC, there are still ways to get involved.

There are sister marches going on around the world and loads of way to show your solidarity from afar.