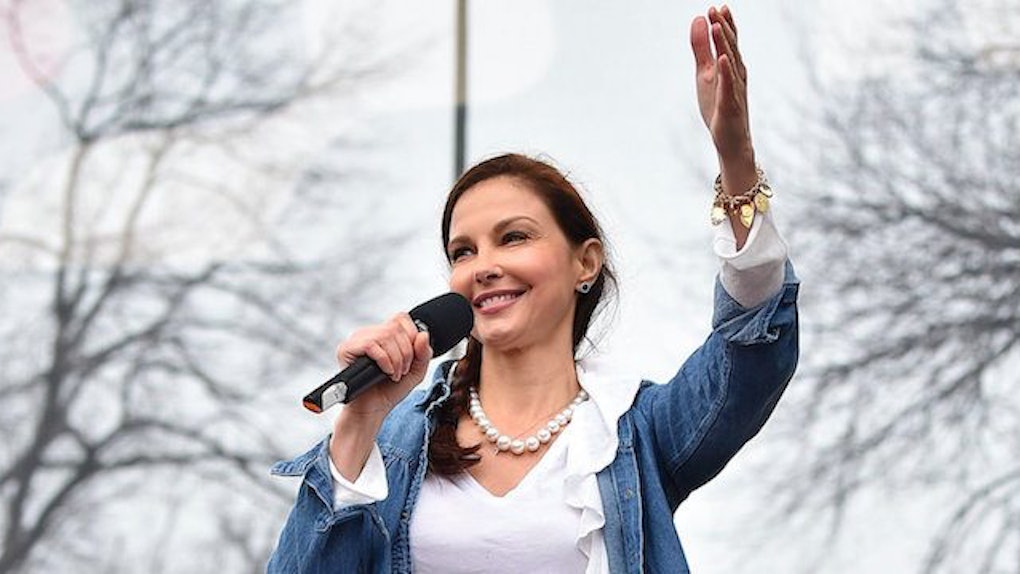 Ladies of all ages and ethnicities from different areas of the world are marching for women's rights and responding to the misogynistic ideals of the new president, Donald Trump.

As millions of "nasty women" gather in Washington DC and around the world, feminist speakers -- many of whom are celebrities -- are rallying the masses with inspirational words that share powerful messages.

Ashley Judd, 48-year-old actress and supporter of women's rights, shared a poem on stage that'll surely give you chills.

The poem Ashley read to the DC crowd was written by Nina Donovan, a 19-year-old woman from Tennessee who allowed the actress to recite it.

As you can see in the video above, after addressing masses at Independence Avenue, she begins passionately sharing the teenager's words that point out what really makes a woman "nasty."

Among the rambunctious cheers from the marchers, Ashley begins, saying,

I am a nasty woman. I'm as nasty as a man who looks like he bathes in Cheetos dust. A man whose words are a distract to America. Electoral college-sanctioned, hate-speech contaminating this national anthem. I'm not as nasty as Confederate flags being tattooed across my city.

While pacing the stage and wailing her arms, she continues,

Maybe the South actually is going to rise again. Maybe for some it never really fell. Blacks are still in shackles and graves, just for being black. Slavery has been reinterpreted as the prison system in front of people who see melanin as animal skin. I am not as nasty as a swastika painted on a pride flag, and I didn't know devils could be resurrected but I feel Hitler in these streets.

... I didn't know devils could be resurrected but I feel Hitler in these streets.

As the poem continues, it calls out the fact she is not as "nasty" as "racism, fraud, conflict of interest, homophobia, sexual assault, transphobia, white supremacy, misogyny, ignorance, white privilege."

... like your wet dreams infused with your own genes.

As Ashley continues reading the words of the enraged Tennessee teen, she honors the women who fought for the right to vote and calls them "nasty."

The poem then notes the wage gap that exists between men and women.

The poem goes on to talk about periods, saying, "I am nasty like my bloodstains on my bed sheets," and asking why tampons are taxed when Viagra and Rogaine are not.

As the poem continues, Ashley recites verses indicating the privilege and entitlement of Trump, before noting the historically "nasty" women whom she admires.

I am unafraid to be nasty because I am nasty like Susan, Elizabeth, Eleanor, Amelia, Rosa, Gloria, Condoleezza, Sonia, Malala, Michelle, Hillary!

Before cheering and chanting ensues among the crowd, the poem ends with these powerful words:

And our pussies ain't for grabbing. They're for reminding you that our walls are stronger than America's ever will be.

Ashley concludes her speech by rallying the women at the march, asking them to scream "hell yeah" if they are a nasty woman or if they love someone who is.

Today, I'm proud to be a nasty woman.