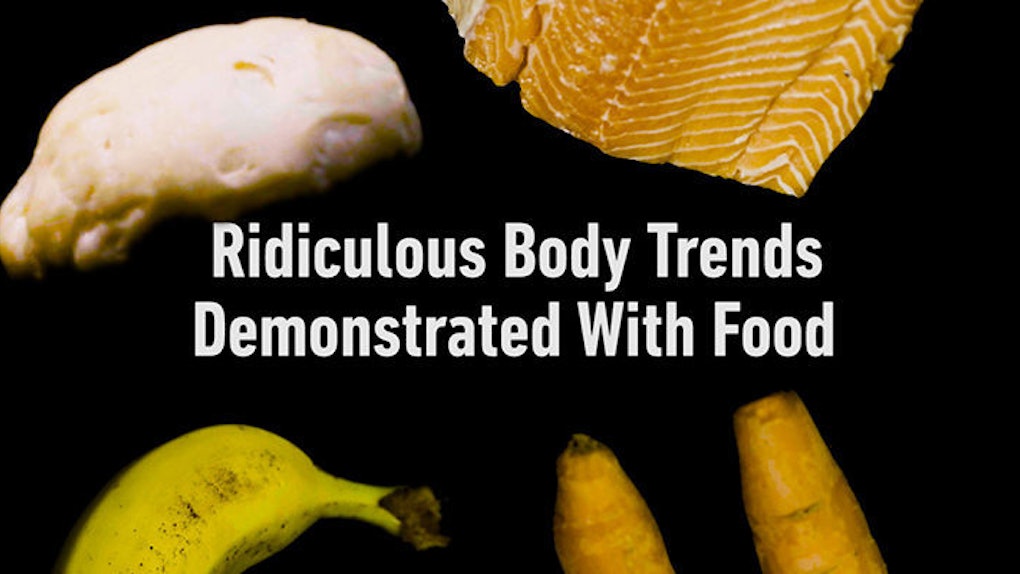 The internet (and media in general) are obsessed with making us feel like shit about our bodies, so much so that body trends exist.

There's the thigh gap, the finger trap, waist training, the collarbone challenge, the bikini bridge (which started as a hoax, but then became real) and the newest member of the body-shaming family, the ab crack. The list goes on.

All these body trends seem to materialize out of nowhere, too.

One day, we're being told to worry about our thighs being thin enough. The next, we're being told that if we can't wrap our arm all the way around our waist and touch our belly button, we're not good enough. (This is appropriately called the Belly Button Challenge.)

The internet is trying to trick us into following one outrageous body trend after another by using the word “trend." Sadly, it's working.

And when I say “us," I'm referring predominantly to women.

Women receive the majority of body ridicule. For example, there is an endless supply of slang words for the parts of our bodies deemed undesirable.

Take the camel toe, for example.

When you do a basic Google search for “camel toe” the results are pretty upsetting.

There are articles that give advice about how to hide your camel toe, with headlines like “How To Wear Leggings As Pants And Not Get Camel Toe."

Several stories are published that focus on the accidental camel toes of talented athletes or other wardrobe malfunctions during a game, rather than the fact that they won that particular game.

We're told to wear tight pants and show off our “badonkadonk," but “please, not the labia. And don't call it that!”

To be frank, it's impossible to find a tight pair of pants that hug everything but that.

One of the body trends forced upon men is the dad bod, which is literally the opposite of being fit and is actually found desirable by many.

Granted, men experience their fair share of body shaming (though it's still less than women, historically).

The pressure is on them to spend every waking hour at the gym, and the corresponding stigma is that they have to be tough and emotionless at all times. Men have to be manly, after all.

And "manly," according to the internet, is spending all hours working out and acting like they don't have an emotional bone in their body.

The most dangerous thing about body trends is they're spread primarily online, where 92 percent of teenagers are active daily.

It'd be shocking if this wasn't a contributor to the 90 percent of teenage girls who are unhappy with their bodies.

The internet is a powerful beast. It spreads insidious body-shaming messages at an accelerated pace.

Don't let them rock your self-esteem.

To let off some steam, watch the video above as we demonstrate some ridiculous body trends through food and destroy them.