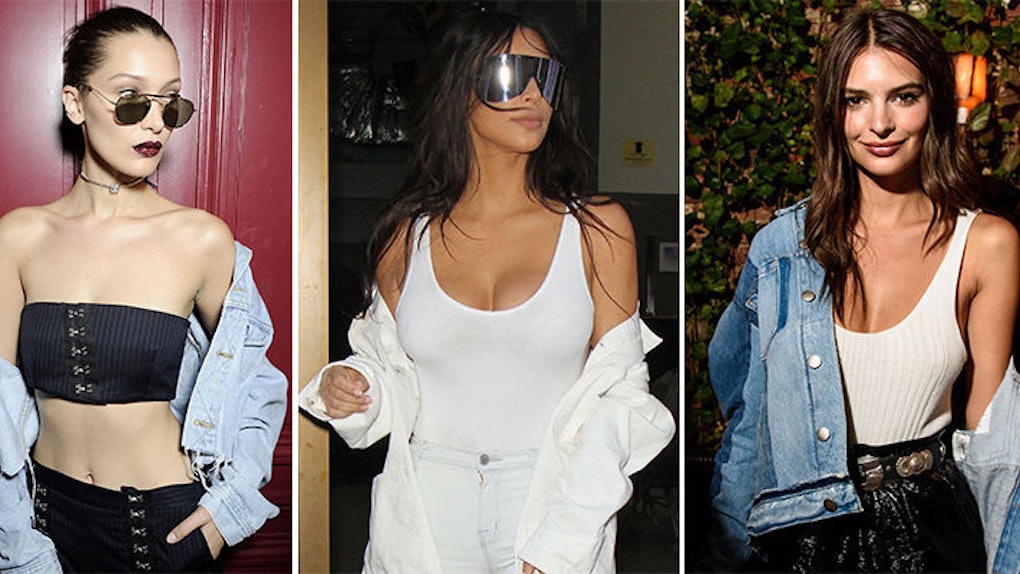 Do you have silky slip dress with thin straps? Put a t-shirt under it!

An oversized t-shirt? Pair it with suede stilettos!

Fashion land is a lot like Alice's time in Wonderland in the way that nothing makes sense, and the laws of the world need not apply.

The latest trend that's driving me up a wall is the fact that nobody seems to know how to wear a coat. (See also: jacket, sweater, long-sleeved coverup.)

Instead of pulling the jacket all the way over their arms and shoulders, celebrities and models have decided draping it around their elbows is most convenient.

It's like they're all your pouty 13-year-old sister who doesn't want to get dressed, but with a lot more cash.

It's a little like that year when every woman wore her coat over her shoulders, arms tucked underneath like some kind of insane beetle.

That particular phase got so obnoxious that even the New York Post passed judgment on it. (Headline: "Stop draping your coat over your shoulders, you look like an idiot.")

Maybe it's the fact that rich people have to show off when they're all together (ahem, New York Fashion Week), or maybe the change of season is messing them up. Either way, I'm really tired of getting flashed collarbone.

The idea, as best I can understand it, is to seem thinner by only showing the parts of the body with the least fat on them: the shoulders and collarbone.

With that in mind, I'm officially calling this “collarboning” — blatantly showing off your sternum in an attempt to seem thinner while still keeping your forearms warm.

Blame Kim Kardashian for the birth of collarboning (and pretty much all other things). As best I can figure, the roots of the problem lie in the duster coats she began wearing to cover her arms while pregnant with baby Saint.

Remember, this is a woman who told reporters her biggest insecurity is "looking fat sometimes."

After giving birth, Kim passed the tip onto model mama Chrissy Teigen, who did the same while brewing her baby.

OK, follow closely here. The two share the same stylist, Monica Rose, who also dresses the likes of the Hadid sisters. Soon, the long coat to hide oversized arms has become a draped coat to show off thin arms.

In Hollywood, everything becomes about thinness eventually. It's the circle of life.

So now Bella Hadid's wearing it, followed by Kylie Jenner, Shay Mitchell and Emily Ratajkowski. Soon, all the second tier "it" girls you only know from Instagram will be wearing it.

Are you sweating yet? No worries, just pull your sweater off your shoulders. It belongs there now.

Collarboning might be trendy, but that doesn't make it interesting to see.

If aliens visited this planet right now, they'd certainly wonder about all these beautiful, insane women walking around with one shoulder out for no apparent reason.

Bare shoulders are undeniable sexy, yes. But when they come at the expense of having to hold all your clothes up like you live in the time before buttons and zippers were invented, they're not worthwhile.

My plan is to close my eyes tight, get off Instagram and pretend this never happened. What about you?