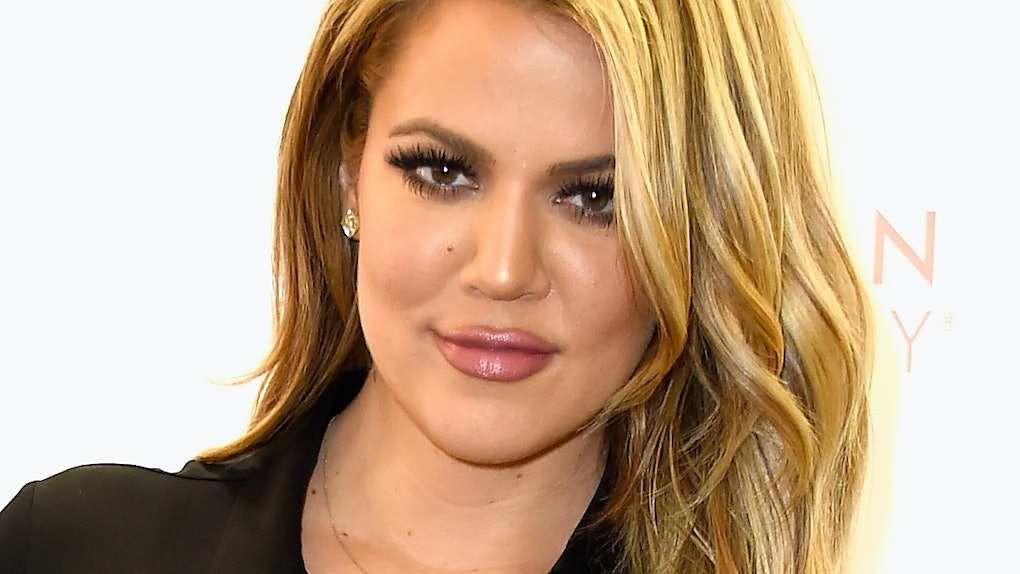 Will Khloe Kardashian Name Her Baby Gabbana? Fans Want Her To For A Sweet Reason

You guys, the universe might be sending Khloé Kardashian serious messages about her baby. On Tuesday, March 27, the star tweeted that she's been dreaming about her sweet pup, Gabbana, who died earlier this winter. While strange pregnancy dreams are definitely "a thing," fans think this could be a bigger sign. Some people are convinced Khloé Kardshian will name her baby Gabbana because of her dreams, and TBH, she just might. Weirder things have happened.

Understandably, everyone has been wondering about Baby Thompson's name since Khloé confirmed her pregnancy. Her sisters have famously chosen unique names for their babies, like North and Stormi, and the public is waiting to see what moves Khloé will make. When she tweeted out, "I have dreamt about Gabbana four nights in a row. I wonder what she is trying to tell me," Twitter was all over it. Mainly, people think it's a signal she should name her future daughter Gabbana. (You know, as in Dolce and Gabbana? Stick with me, folks.)

While it's simply the latest name theory in a series of name theories, it's been fun to read fans' comments on the concept.

I mean... is it possible Gabbana is trying to tell her something?

Other fans suspect Khloé's dreams are a sign Baby Thompson is going to arrive soon!

Khloé obviously took the time to consider her fans' genuine thoughts, and tweeted out how much she loved their responses. She wrote, "Your responses are so sweet guys," and, of course, she added a dog emoji.

If Kardashian did decide to go with Gabbana, it would be a definite misdirect based on the name clues she's already dropped.

For example, Kardashian admitted on an episode of The Ellen DeGeneres Show that she and boyfriend Tristan Thompson were considering baby names that begin with a "T" or a "K." Before the public knew she was having a girl, Kardashian told Ellen DeGeneres, "I think if it's a boy I'll go with Tristan Junior. For a girl I don't even know where to begin. I think I'll go with a K or a T name though."

KoKo has been open with her fans about her pregnancy since she first announced the good news in December. In fact, her journey into motherhood has been heavily documented on Keeping Up With The Kardashians, even more so than Kim's experience with surrogacy and Kylie's first baby, Stormi. Though the public finally got all of the details about the sisters' pregnancies, there was a lot of speculation surrounding their growing families for a long, long time.

Khloé addressed her initial secrecy in her pregnancy announcement on Instagram. She explained:

I know we've been keeping this quiet but we wanted to enjoy this between our family and close friends as long as we could privately. To enjoy our first precious moments just us ❤️ Thank you all for understanding. I am so thankful, excited, nervous, eager, overjoyed and scared all in one! But it's the best bundle of feelings I've ever felt in my life!

Now, it seems like the baby could arrive almost any day. Khloé and Thompson officially moved into their Cleveland home where they plan to have their baby. A source told People magazine,

Khloé is in Cleveland and plans to stay there until the baby is born. She is too far along to fly back and forth. She is doing great and seems very happy every day. Her family is flying to Cleveland when it’s baby time. Khloe especially wants Kris there for the birth.

The source added, "She is taking it easy in Cleveland, getting everything ready and she can’t wait to meet her baby girl."

Gabbana and I have your back, Khloé! The world can't wait to meet Baby Thompson and we hope she makes her debut soon!