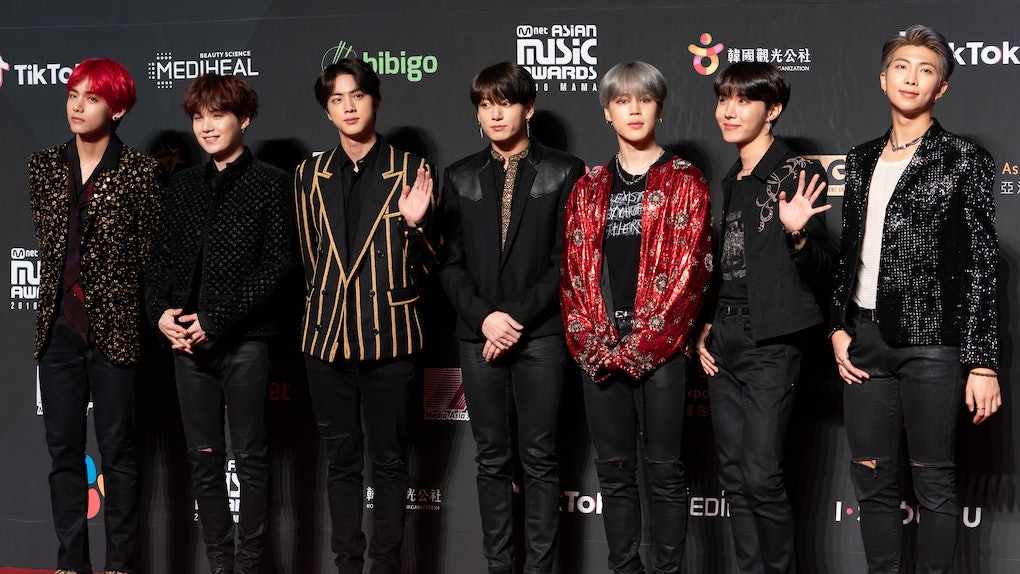 Will BTS Be At The 2019 MMAs? The Promos Sure Are Something

The BTS ARMY only has one question on their minds now that the Korean award show season has arrived: Will they or won't they attend? With BTS arguably being the most in-demand group right now, it's difficult to pin point when or if they'll make certain appearances due to their jam-packed schedules. Now, after wrapping up their final Speak Yourself tour dates in October, the group has fans wondering whether BTS will be at the 2019 Melon Music Awards on Nov. 30 or not. Promos have come out for the award show, and while they heavily feature some steamy BTS imagery, they don't confirm their appearance.

UPDATE: Good news, ARMYs: The Melon Music Awards Twitter account confirmed in a Nov. 18 tweet that BTS will attend and perform at the MMAs, along with Mamamoo, Jannabi, Chung Ha, and Heize.

PREVIOUSLY: Although it seems like the MMAs are a can't-miss award show for BTS, whether the group will perform or not, yet alone appear, is a valid question for fans. BTS has already missed a few award shows this year to accommodate their busy schedule. The group didn't appear at the Teen Choice Awards on Aug. 11. The same day, they performed at the Lotte Duty Free family concert. Then, on Aug. 26, BTS didn't appear at the MTV Video Music Awards either. From mid-August to mid-September, RM, Jin, Suga, J-Hope, Jimin, V, and Jungkook all went on separate vacations to "rest and recharge" after touring around the world for non-stop over the past six years together.

The members returned from their vacation on Sept. 16, and performed their back-to-back Love Yourself: Speak Yourself [The Final] concerts in Korea on Oct. 26, 27, and 29. Before the year finishes, BTS still has a few events scheduled, such as their Magic Shop Japan fan meeting on Nov. 23 and 24, their Jingle Ball concert on Dec. 6, their second Japan fan meeting on Dec. 14 and 15, and their KBS Gayo Festival appearance on Dec. 27.

But will the Melon Music Awards be added to that list of engagements? So far, Big Hit Entertainment hasn't confirmed BTS' appearance, but because the group is seemingly available that day, fans aren't ruling out the possibility. The Melon Music Awards has even shared promos for their award show featuring BTS, which fans think could be a hint BTS will be announced as performers soon.

Before you watch the clips below, know they'll take you on one heck of a rollercoaster of emotions.

The BTS ARMY always looks forward to the MMAs because BTS goes all-out for their performances each year, often hinting at their next album and performing a medley of their biggest hits from the past year. In 2018, BTS' 20-minute MMAs performance left ARMYs in awe, as the guys sang "Fake Love," Airplane Pt.2," and "IDOL."

If BTS does perform at the Melon Music Awards, fans can likely expect a similarly mind-blowing performance.

This article was originally published on November 4, 2019

More like this
Do The BTS Members Have Personal Instagrams? Here's What Baby ARMYs Need To Know
By Michele Mendez
Here's Why Meghan Markle Reportedly Isn't Attending Prince Philip's Funeral
By Cianna Garrison
Where Is The 2021 Oscars Ceremony Being Filmed? The Location Is So Different
By Umber Bhatti
Stay up to date