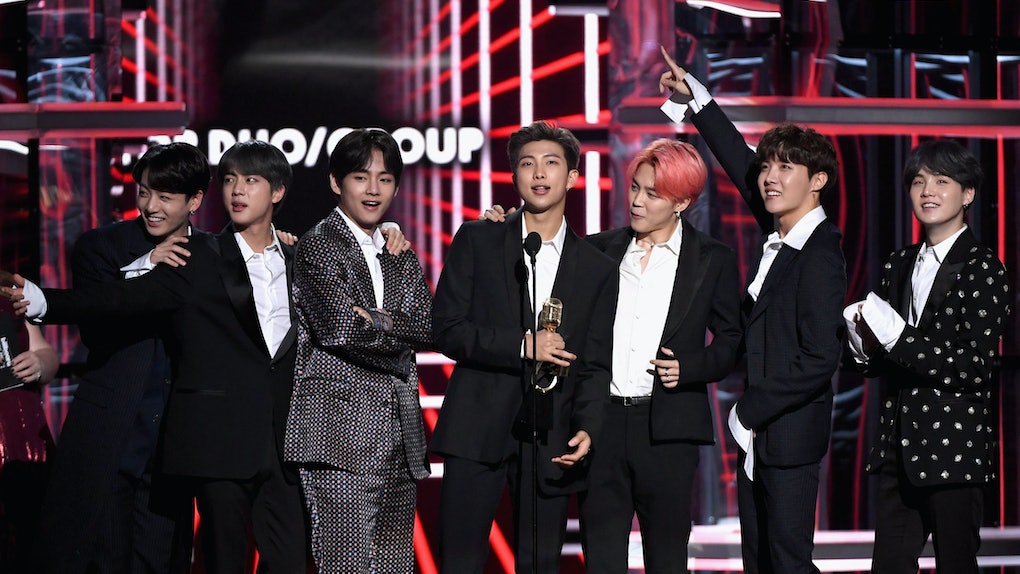 BTS Is Going On A Break, So Here’s What That Means For Fans

I never thought I'd see the day where the BTS boys hit the pause button on their performances, appearances, and shows, but it looks like the day is finally here. BTS' management company, Big Hit Entertainment posted a tweet on Aug. 11 sharing some big news about BTS and what the boys will be up to for the foreseeable future. BTS is going on a break, and here's what ARMYs should know about it.

After a busy year of back-to-back concerts and a big album release, J-Hope, Jimin, Jin, Jungkook, RM, Suga, and V are officially taking an official break for an undisclosed amount of time. This marks the first time since their debut in 2013 that BTS will be on a break. A statement released by Big Hit Entertainment outlined some more details about the break, calling it an "extended period of rest and relaxation." Here's the full statement:

Hello. This is Big Hit Entertainment. We would like to announce that for the first time since their debut, BTS will be going on an official and extended period of rest and relaxation. Today's LOTTE DUTY FREE FAMILY CONCERT performance will mark the last scheduled event before the members prepare to take their vacations. This period of rest will be an opportunity for the members of BTS, who have relentless (sic) driven themselves toward their goal since their debut, to recharge and prepare to present themselves anew as musicians and creators. This will also provide them with a chance to enjoy the ordinary lives of young people in their 20s, albeit briefly. During this time, the members will rest and recharge in their own personal ways. Should you have a chance encounter with a member of BTS while they are on vacation, we ask that you show them consideration for their need to rest and enjoy their private time off. BTS will return refreshed and recharged to return all the love you have and continue to show them. Thank you.

If you're panicking a little about the whole "BTS will be gone for a bit" thing, worry not because there are still ways to keep up with the boys as they get their much deserved, super overdue vacay. If you don't already, make sure to follow BTS' Twitter account @BTS_twt and download Weverse, where the boys frequently post messages, photos, and other content, as well as the YouTube channel BANGTANTV, where there's plenty of surprise content that frequently pops up.

Twitter ARMY is being so supportive of the boys in the wake of their hiatus announcement. Twitter user @hitman_fanbase thanked the boys for their hard work and wrote, "You deserve this period of rest! Enjoy your free time! You all need some new fresh air!"

Twitter user @jinepiphany echoed the sentiment, writing, "REST WELL KINGS YOU DESERVE IT SO MUCH I’M SO HAPPY THAT YOU’RE ALL DOING THIS YOUR HAPPINESS IS OUR HAPPINESS ENJOY AND HAVE FUN WE WILL FOREVER BE HERE."

A lot of Twitter ARMYs felt that the most important part of Big Hit's statement was the part about leaving BTS members alone if people ran into them while on vacay, like Twitter user @hobiotics who wrote, "LEAVE THEM ALONE IF U SEE THEM IN PERSON OR IT'S ON SIGHT."

Even though the boys will be taking a hiatus, they'll be back in no time for all the ARMYs who are stressed about what their lives might look like without BTS. In the meantime, it seems like everyone really wants these K-Pop powerhouses to get some meaningful rest.

More like this
Big Hit's Response To Rumors BTS' 2021 Comeback Is In May Is Making ARMYs Suspicious
By Michele Mendez
With 'Like Water,' Wendy Found Her Biggest Cheerleaders In Her Red Velvet Bandmates
By Michele Mendez
Which Album Will Taylor Swift Re-Release Next? Her Hints Have Fans Shaking
By Brandy Robidoux
Stay up to date