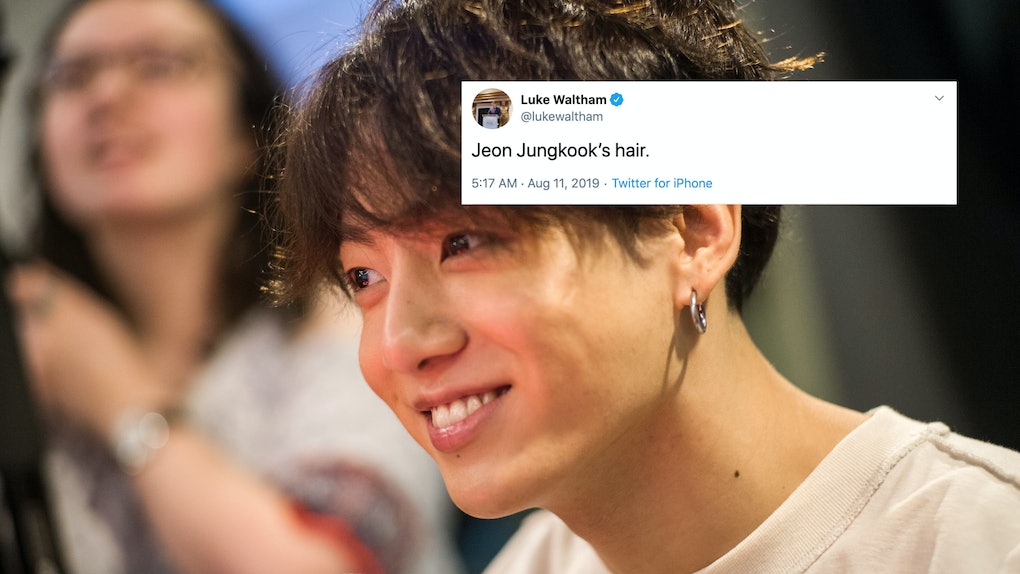 Even when BTS is on a "break," they're not really on a break. The boys are reportedly taking the months of August and September off, sans this one major concert that went down on August 11. BTS' Lotte Duty Free family concert performance had ARMY super high-energy and hyped. God bless these boys' undying work ethics.

Lotte Duty Free is Asia's top duty free store and staggering conglomerate. 2019 marks it's 29th birthday, which has called for an extra special Family Concert. According to Pulse News, the concert has become one of Korea's largest and most celebrated cultural events. In 2018, it reportedly saw 100,000 fans. NBD.

This year, the concert was held at the Olympic Park's Olympic Gymnastics Arena in Southern Seoul. J-Hope, Jimin, Jin, Jungkook, RM, V, and Suga took the stage on Aug. 11, the last day of a three-day event. Naturally, they crushed it.

Among other songs, the boys performed "Home," "Fake Love," and "Best Of Me," and my personal fave "Boy With Luv," which they performed with their usual high-energy choreography and colorful stage lights. But there was something beyond the performances that had ARMYs sweating — Jungkook. According to reactions in the Twitterverse, ARMYs were absolutely losing it over Jungkook's long hair and piercings, and I have to say that they were totally right to be in shambles.

Along with BTS' incredible show-stopping number, other artists Twice, Ji Chang-wook, and K-pop groups Dynamic Dup, Super Junior D&E, Stray Kids, and ITZY. While it's amazing to know there's no shortage of music or talent while BTS is on hiatus, it still pains ARMYs to think they aren't getting as much of their boys as they want to at all times.

In a report originally released by Donga that was then translated by Koreaboo, BTS is taking a break mainly from "touring, performing, and potentially overworking themselves." They are reportedly going to be using their time off to visit their hometowns, chill with their families, and nurture relationships with people outside of the music industry. There is also speculation they will be working on solo projects and other productions as well. Understandably, they are probably tired from the past strenuous handful of months on tour, even as idols.

The boys went hard with their Love Yourself concerts from August 2018 to April 2019 and left no room for rest before their Love Yourself: Speak Yourself stadium tour, which lasted from May 2019 to July 2019. Frankly, it's nice to think about them all sleeping in and watching trash reality TV. (I don't know. That's what I do when I'm in some desperate need for R&R, anyway.)

Fortunately, the boys have maintained their social media presence and are keeping fans going with things like Bangtan Bombs, VLIVE videos, plus their delicious app game BTS World and interactive app, Weverse. Hopefully, this bonus performance carries ARMYs through until the boys make what I can only assume is a triumphant return in October 2019.

For now, keep this performance open on repeat in your server and get it while you can.

More like this
Here's How To Stream BTS' 2021 'Bang Bang Con' So You Don't Miss The Concert
By Cianna Garrison
Prince Philip, The Duke of Edinburgh, Has Died At The Age Of 99
By Noelle Devoe
I Tried Singing While Running Like Miley Cyrus & OMG, My Lungs
By Rachel Varina
Stay up to date