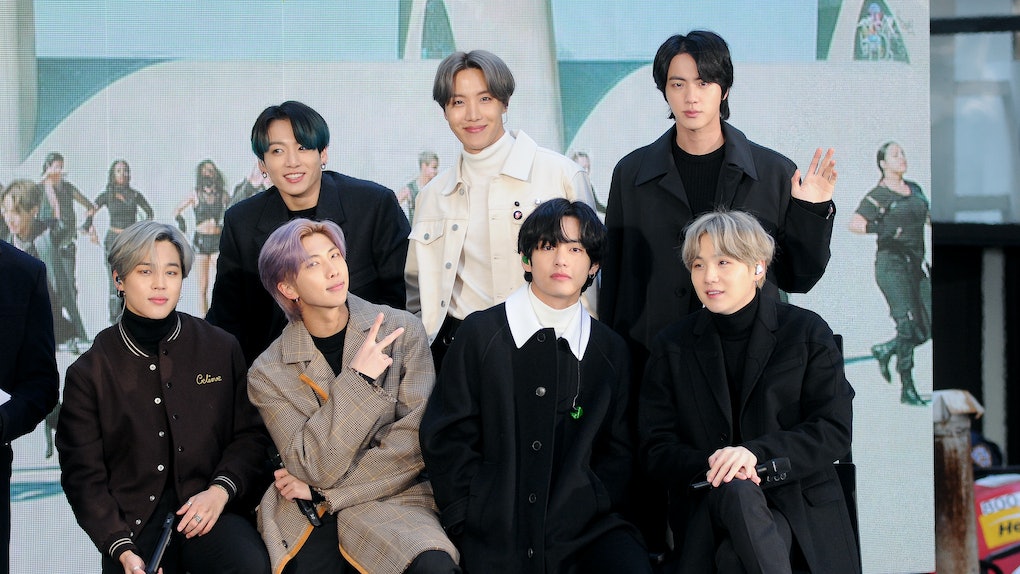 What Is Weverse? BTS & TXT's New Official Fan Community App Is A Game-Changer

International ARMY and MOAs, if you’re not already hip to Big Hit Entertainment’s fan community app Weverse, know everything about it is going to change the way you fangirl alongside your fellow fans around the world. Most artists in K-Pop use a Korean forum called fancafe to communicate and share exclusive content with fans. But fancafe is run by a third-party web portal called DAUM that’s not particularly easy for international fans to access or use (which is understandable, considering DAUM is a Korean company and has no obligation to cater to international fans). Considering BTS' unprecedented international success, it's no wonder Big Hit took to Twitter on June 30, 2019, to announce BTS' official fan community app called Weverse geared toward an international fanbase. So, what is Weverse? Let me explain.

But first, some history on Big Hit’s fan communities: It all started with BTS’ DAUM fancafe. Fancafe is a beloved corner of the internet where fans of BTS and other K-Pop stars can communicate with BTS and other ARMYs and see exclusive content from their faves. The only hiccup with the forum is its content is exclusively in Korean, which made it very hard for international fans to get involved. International ARMYs still did what they had to, writing up tutorials on how to register and use the site in other languages so international ARMYs could at least see the exclusive content BTS was posting. But with the language barrier, there was only so far non-Korean-speaking international ARMYs' involvement could go.

Enter TXT, Big Hit's newest boy band. ARMYs were surprised when, on Feb. 1, 2019, before TXT even debuted in March 2019, Big Hit announced their official fan community was launching via a non-DAUM-affiliated website called TXTUniverse.com. ARMYs were curious (read: really, really disappointed) why, despite ARMYs begging for a more international-fan-friendly environment for ARMYs for years, Big Hit launched one for TXT before BTS. But once Big Hit launched Weverse in June 2019, it became clear TXT's international web community and, before that, BTS' ARMYpedia were all part of a master plan.

If you look under the hood of TXTUniverse and ARMYpedia, they were both developed by BeNX, Big Hit's online application development subsidiary focused on creating services to maximize online and offline experiences for fans around the globe. They also developed the Weverse companion app, Weverse Shop (formerly Weply), BTS and TXT's official merch store.

As soon as BeNX launched the Weverse app, TXTUniverse.com closed down, directing all TXT fans to download the Weverse app, a move that suggested BeNX (aka, Big Hit) was testing out their new fan community technology on a smaller fandom and smaller pocket of BTS' fans before they officially launched the app for BTS' massive international fanbase (which was smart, considering BTS' Weverse portal already has over well over 4 million registered users after less than a year).

Now that you have all the background info on the history of Big Hit’s fan communities, here's what you can do on their official Weverse app. Put simply, it allows fans to connect with other fans around the world, the members of bands themselves, and, much like fancafe, allows them to enjoy exclusive content you can't see anywhere else handpicked for Weverse members. It also has an Instagram-Story-esque feature called "Artist Moments" where artists share "funny, touching, or inspirational" posts with fans that expire once they share a new moment.

A big selling point for international fans is that the app has a built-in translator that allows them to translate artists' posts into their preferred language. Right now, the app is available in English, Korean, Japanese, Chinese, Spanish, Portuguese, Indonesian, Malay, and Thai.

It’s worth noting, although Weverse was created by Big Hit Entertainment, it’s not just for fans of groups repped by the label. In addition to BTS and TXT, the app also has a community for GFRIEND, a K-Pop girl group under Big Hit’s subsidiary label Source Music. They also allow bands who aren’t affiliated with Big Hit at all on the app. Pledis Entertainment-repped group Seventeen also has a community on the app. All four groups have shops on Weverse Shop, but only BTS and TXT have sections specifically for their U.S. fans, while GFRIEND and Seventeen only have global shops (which means their shipping prices and payment options are not optimized for U.S. fans).

While most content on Weverse is available to enjoy for free, in July 2019, Big Hit launched a premium section called the BTS' Global Official Fanclub where fans can gain access to even more exclusive content and real-life BTS perks. For a yearly subscription fee of $30, the membership gives ARMYs access to buy exclusive ARMY Membership merchandise (and early access to new merch), access to pre-sale tickets for tours and domestic performances, membership-only image, audio, and video content, and exclusive merch raffles.

It's unclear what the future of BTS' fancafe on DAUM is. BeNX did not respond to Elite Daily’s request for comment, but, for now, it appears to be up and running as usual.

International ARMY can log in to Weverse now to enjoy all it has to offer. Jimin, Suga, Jungkook, Jin, J-Hope, and RM constantly post on the app, so there's much to explore and enjoy.

This article was originally published on July 1, 2019