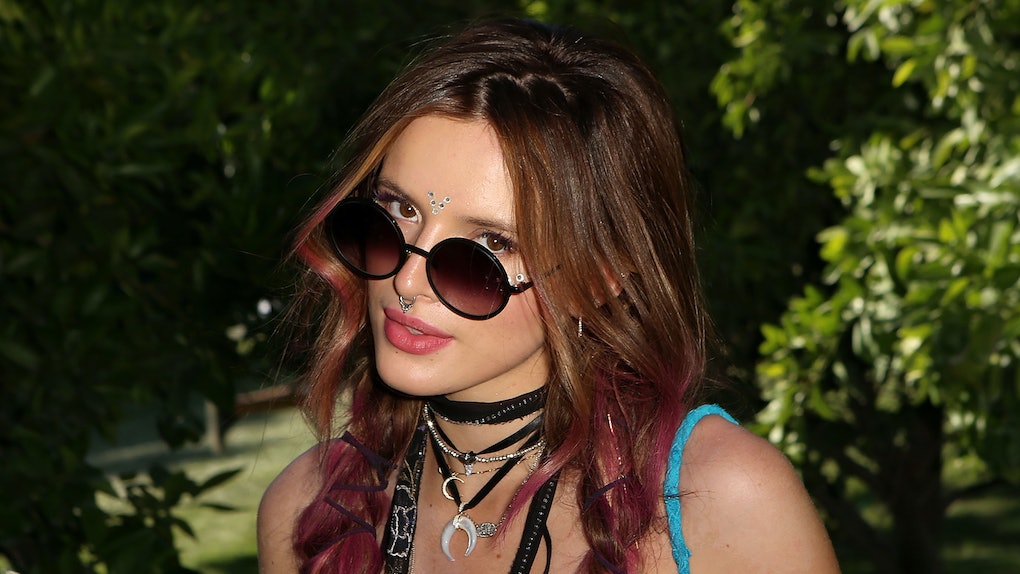 Who Is Bella Thorne Dating? ModSun Is The Rumored New Man In Her Life

Bella Thorne is truly a wildcard in Hollywood. One minute she's galavanting off with Scott Disick and the next she's starring in a surprisingly good movie that comes out of left field. The only thing harder than keeping track of Thorne's booming career is trying to guess who her new significant other is. Who is Bella Thorne reportedly dating now? Although nothing has been confirmed, the actress has a new rumored man in her life. Hint: It's definitely unexpected. Well, it caught me by surprise (as basically everything else has).

One thing is for sure — Thorne doesn't really have a type. She's young and is seemingly having a great time reportedly dating and hanging out with different people. Honestly, more power to her — that's what dating is for. However, her newest reported fling has some fans scratching their heads. The latest person she's been seen all over the place with is musician and rapper Mod Sun. They have been featured heavily on each other's social media pages and have reportedly even made a few public appearances together. Here is a picture of Thorne and Mod Sun that was posted on his Twitter:

The puzzling thing is that ModSun is very close with Blackbear — the two have even collaborated on music together. Who is Blackbear? He's a rapper (real name Matthew Tyler Musto) who was reportedly romantically linked to Thorne two months ago.

Rumors started swirling about Thorne and Blackbear when the two were in an Instagram photo together. Thorne is seen licking Blackbear's ear, and the original post reportedly even included the "ON" emoji with a rainbow and flower.

It seems that the two fizzled out as fast as they allegedly started up. Now, Thorne may be moving on to his homie, Mod Sun. If you've been seeing this guy's name and face popping up, here's what you need to know.

According to his website, Mod Sun (which is actually an acronym for Movement On Dreams, Stand Under None) is a rapper who's upbeat music is all about happiness, love, and smoking a lot of weed (example: "Stoner Girl"). The connection between Blackbear and Mod Sun has left fans very confused about Thorne's reported relationship.

Once again, Thorne is free to date whomever she wants. Also, she nor Mod Sun have confirmed anything. As of now, this is all just speculation. Thorne actually denied rumors that she was dating Blackbear in the first place. Her tweet said,

We didn't break up cuz we were never like that. Just on some chill sh*t

Hmmm... are we getting all crazy over nothing? I'm not really sure. According to Teen Vogue, Blackbear has been tweeting very cryptic messages, like, "I wish we could be strangers again," and "left with only pictures in my mind."

Also, Blackbear allegedly tweeted "u don't f*ck ur best friend ex." The tweet has since been deleted. Although there are pictures of it floating around the internet, there's no way to know if this actually happened.

All of this seems so dramatic, but Thorne and Mod Sun are seemingly very friendly on social media.

According to Seventeen, In addition to their online friendship, the pair even walked the red carpet together at the premiere of Thorne's newest movie, The Babysitter. Very, very interesting.

Overall, Thorne's dating life is really none of our business. As long as she's happy, let her live her life. As far as her potential relationship with Mod Sun, I guess we'll all just have to wait and see if that continues to be a thing. Way to keep us on our toes, Bella.

More like this
Matt James & Rachael Kirkconnell Reportedly Aren't Together After Their Rumored Reunion
By Joyann Jeffrey
Sofia Richie Rumored Boyfriend, Elliot Grainge, Is Reportedly A Family Friend
By Corinne Sullivan
Will Prince Harry Attend Prince Philip's Funeral? He's Reportedly Planning On It
By Cianna Garrison
Stay up to date