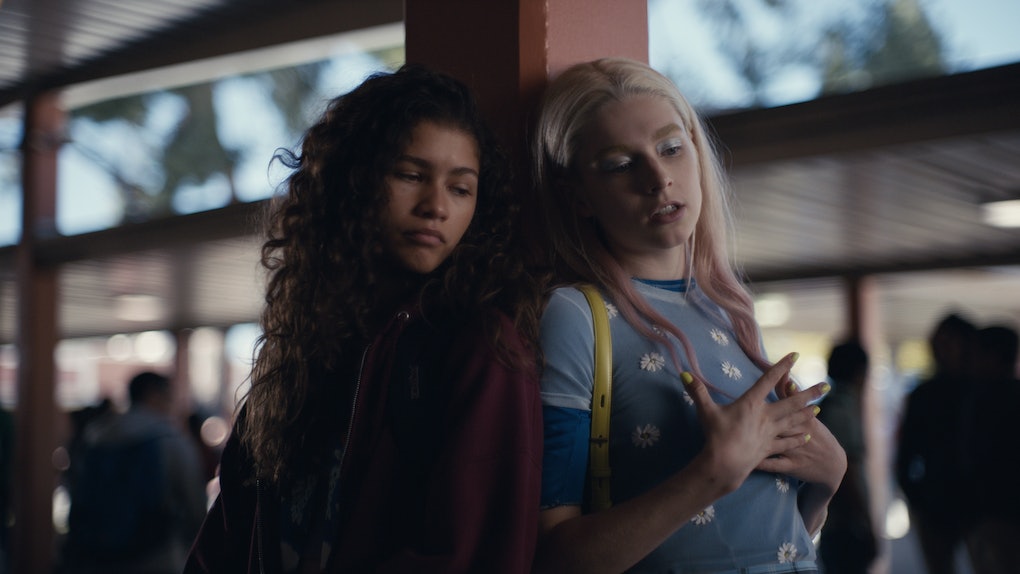 What Comes In The 'Euphoria' Book Box Set? Here's What To Expect

Euphoria became an instant sensation when it hit HBO in summer 2019, telling wild yet poignant coming-of-age stories in a glittery, neon-soaked world all its own. But even after two special episodes premiered in late 2020, waiting over two years for Season 2 has been rough, to say the least. However, there's a bright spot in all this: While fans itch to catch up with Rue, Jules, and the rest of the gang, they can get some epic behind-the-scenes intel thanks to a brand-new release. You may be wondering: What comes in the Euphoria book box set? The collection is super extensive.

According to the official product description, the box set will dive "into every aspect of the creative process," featuring over 1,000 pages detailing everything that went into making Season 1. Each of the eight limited edition, holographic books (which retail for $98 as a set on production company A24's official website) will focus on how each episode from the season came together, from storyboards to costume and makeup design to full scripts. They'll also feature plenty of interviews with the cast and crew, including series creator Sam Levinson, stars Zendaya and Hunter Schafer, makeup artist Doniella Davy, music composer Labrinth, fashion designer Heidi Bivens, and more.

If you fell hard for the Euphoria cast over the course of Season 1 and the bridge episodes, you'll also be happy to know that the books detail just how involved your favorite stars have been in the making of the show. They'll showcase exclusive cast contributions like Schafer's sketches, Barbie Ferreira's mood board, pages from Sydney Sweeney's scrapbook, and behind-the-scenes pics from Jacob Elordi and Maude Apatow.

By the time viewers are done perusing the many pages of the Euphoria books, hopefully they won't have much longer to wait before Season 2's arrival. In an April 1 interview with Deadline, Eric Dane (who plays Nate's dad Cal) confirmed production on the highly anticipated season started in mid-April, saying, "I'm sure we're going to get this out as soon as we can." And during a January interview on IndieWire's Filmmaker Toolkit podcast, Levinson said he plans to release new episodes this year.

So get hyped to learn all of Euphoria Season 1's behind-the-scenes secrets before Season 2 hopefully returns this year and takes everyone on an intense ride.