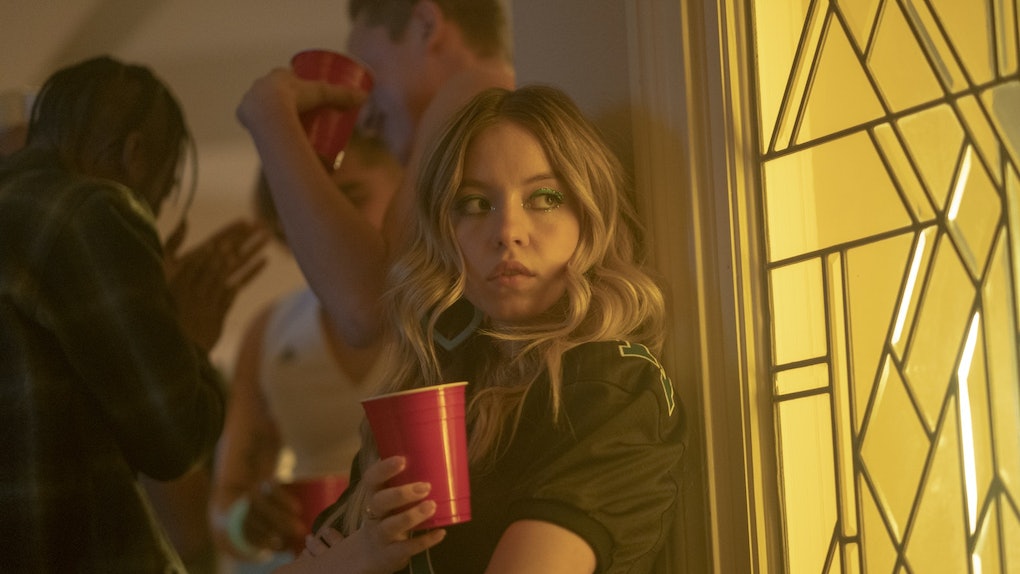 Nearly two years after Euphoria's series premiere made it an instant smash hit, fans are desperate for more neon-drenched teen drama. Luckily, Season 2 is finally in the works, with episodes expected to come out this year. But as much joy as the show's return will bring to viewers, it also means they'll have to despair as their fave characters endure even more devastating twists and turns. Case in point: Sydney Sweeney's hint about Cassie's Euphoria Season 2 story, which is bound to make fans nervous.

Like pretty much every Euphoria character, Cassie's Season 1 journey was intense, to say the least. She dealt with slut-shaming from her peers as well as a tumultuous relationship with her college football star boyfriend, McKay (Algee Smith). By the end of the season, Cassie decided to get an abortion following an unexpected pregnancy and seemingly ended things with McKay. It actually looked like she was starting to unlearn the impulse to base her self-worth on men's opinions of her and taking important steps toward her own self-empowerment.

But this is Euphoria after all, and life for the show's teens is rarely that easy. When asked if Cassie will continue to move forward in future episodes, Sweeney tells Elite Daily, "She doesn't take very far steps. That's all I can say." Ouch.

Fans will see what she means soon enough. During a January interview on IndieWire's Filmmaker Toolkit podcast, Euphoria's showrunner Sam Levinson said he plans to release new episodes this year. Season 2 is currently filming, so if all goes according to plan, the first episodes could arrive in late 2021.

As viewers wait for Season 2, they can rewatch the show's two bridge episodes, which focused on Rue (Zendaya) and Jules' (Hunter Schafer) individual journeys in between seasons. The majority of the show's other characters were absent from these special episodes due to COVID safety precautions, but Sweeney has her own ideas for what a solo Cassie episode could've looked like. "I’d love to see her relationship with Lexi more," she says. "I think that they have such a beautiful yet broken sisterhood, and I think it’d be really cool to dive into the dynamic."

TBH, it's probably a good thing Cassie didn't get a bridge episode because Sweeney has stayed booked and busy with other projects. She stars in the upcoming Amazon Original thriller Voyeurs, as well as the beachy HBO limited series The White Lotus. She's also working on developing the HBO teen drama The Player's Table (in which she'll co-star with Halsey), and is also set to headline the crime drama Silver Star.

"I'm always excited equally for each [project], because they're so completely different from each other," she says. But if she *had* to pick the one she's most pumped about? "I'm really excited for Voyeurs, because it's something I've never quite done before."

Fans may have to wait a while for Sweeney's upcoming projects, but they can get involved with her latest endeavor right now. She recently partnered with BIC to spotlight the brand's line of affordable razors.

"From a young age, it was instilled in me to save money and make a budget stretch. So with BIC and all of their great value [products], I felt such an organic partnership," Sweeney says. "Because I understand and appreciate the value of a dollar." (Relatable!) For BIC's "Win-Win" promotion, shoppers receive $5 back on any BIC razor and will automatically be entered into a sweepstakes for the chance to win $500.

A little self-care sounds like a great way to pass the time as Euphoria fans wait to see how Cassie makes it through Season 2.

More like this
'Shadow And Bone' Star Jessie Mei Li Can't Stop Watching These Niche YouTube Videos
By Abby Monteil
'Succession' Season 3: Premiere Date, Cast, Plot Details, & More News
By Dylan Kickham and Ani Bundel
These Reddit Theories About Who Killed Erin On 'Mare Of Easttown' Are Too Smart
By Ani Bundel
Stay up to date