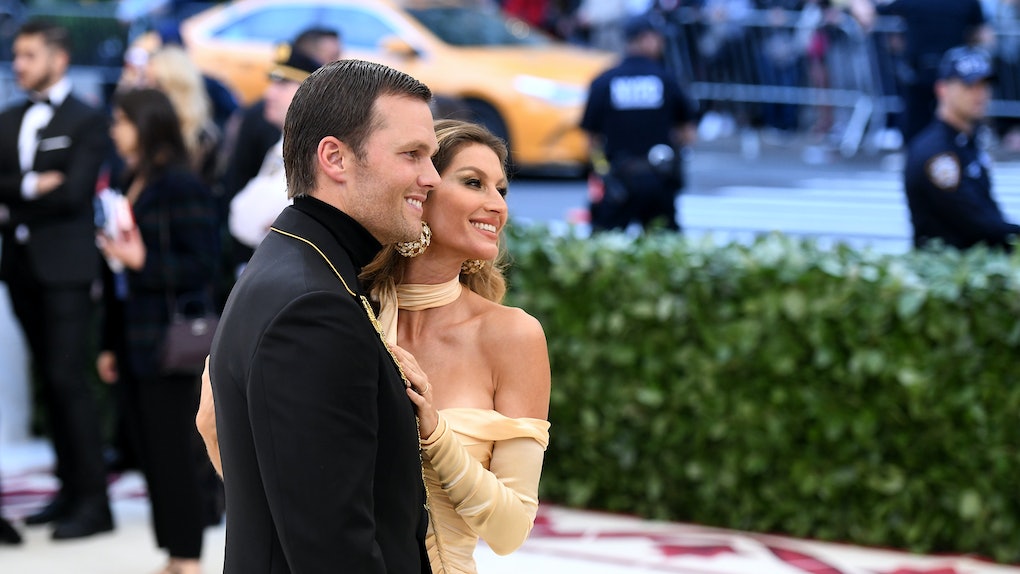 If there's one thing that Valentine's Day is especially notorious for, it's all the celebrity couple #goals we see broadcast across social media all day long. Whoever your favorite celeb couple is — from Nick Jonas and Priyanka Chopra to Cole Sprouse and Lili Reinhart — chances are you'll see some pretty adorable pics of them with even more precious captions to go with them. Even the simplest celeb posts can still make your heart fill with happiness, like Tom Brady and Gisele Bundchen's Valentine's Day posts about each other. You can tell this definitely isn't their first rodeo.

Brady and Bündchen's love has spanned over a decade. The two were set up on a blind date in 2006 and started dating officially shortly after. In early 2009, they got married not once, but twice. Less than a year later, they welcomed their first child together: a son named Benjamin. Three years later, almost to the day, their daughter Vivian was born. Come May 2015, Us Weekly reported that the two were having some serious marital issues, but by September, everything seemed to be fine and dandy when Brady said on a Boston radio show that they were "in a great place," People reported. All in all, these two seem to be very much in love and very much not immune to the the constant work relationships are really all about.

But if there's one thing that hasn't changed in the 12 years Brady and Bündchen have been together, it's their undying love and support for each other, which is very evident in their social media posts. Instead of going for a long, incredibly mushy caption on both their pictures (which I would've been totally fine with also, TBH), Brady and Bündchen kept it short and sweet, and Brady even added an extra hint of adorable. In the beyond precious photo he posted to wish his gorgeous wife a Happy Valentine's Day, Brady threw in a little Portuguese as an ode to Bündchen. He captioned his post: "My Forever Valentine!!! Te amo tanto amor da minha vida! ❤️," which translates to "I love you so much, love of my life." What did I tell you? Short and so, so sweet! I'm not sure how fluent Brady is in Portuguese, but I love that he writes his lady these messages in her native tongue. That can't not mean so much to her.

Not only do they seem head-over-heels in love with each other, but Brady and Bündchen are also incredibly in sync. Need proof? Her Valentine's Day shoutout to her hubby mimics his almost identically. Bündchen posted a beautiful picture of the two of them and wrote: "Happy Valentine’s day! Te amo! ❤️" You don't always need a long message to tell someone you love them. Just saying those three words can be enough, and Bündchen knows it.

So, whether your fave celebs are posting paragraphs about their love for each other or keeping their "Happy V-Day" messages short and sweet, I'm sure your heart will be swooning on several occasions today. I'll be in the corner, crying happy tears and reading each one!