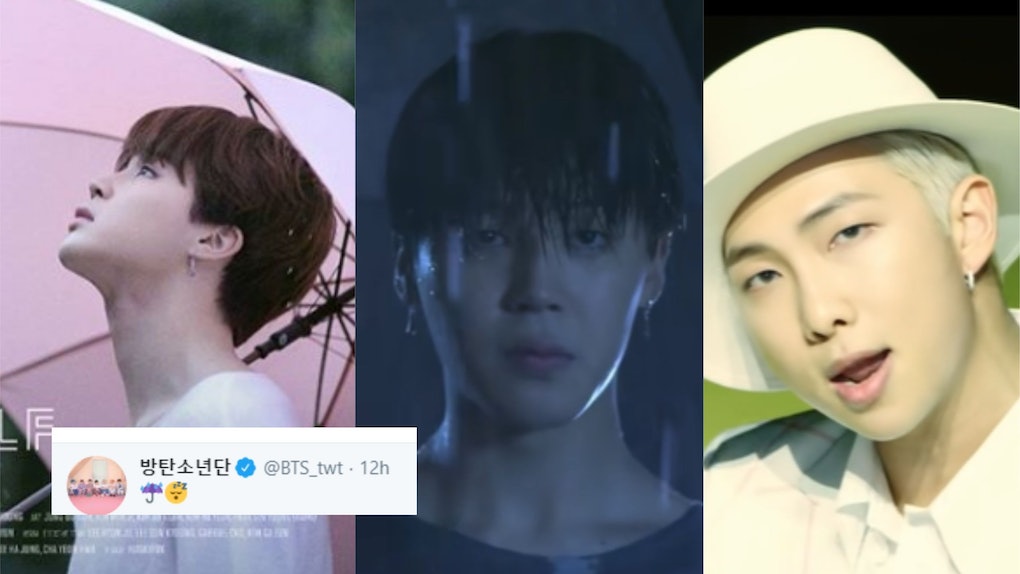 BTS may be on a break, but the BTS ARMY is definitely not. In fact, they're busier than ever catching up on all of BTS' Run! episodes, BANGTANTV videos, and VLIVEs that BTS has shared these past few months. While they wait for BTS to make their next comeback, fans are also digging up any possible clues they can find about BTS' next album, single, or concept. Fans have already theorized for months that BTS' next album will be called Map of the Soul: Shadow, and now they think they have the name of BTS' next single. The theory that BTS' next single will be called "Umbrella" is honestly so convincing and has me questioning any and all BTS content I've ever consumed.

OK, since I have a lot to unpack, I'll just get right into the theory. Fans think BTS' next single will be called "Umbrella" because the group has been referencing umbrellas a lot in their music videos, tweets, and concert VCRs. Their umbrella references go as far back as 2017, but what really made fans think the symbol meant something super important was a tweet by V.

Since BTS began their break, V has been sharing videos on Twitter of himself singing in the car. On Aug. 14, he posted a video of himself singing along to Bruno Major's "Places We Won't Walk" and captioned it using a purple umbrella emoji. The umbrella emoji would seem meaningless to people outside the fandom — since it would seem obvious V used it because it was raining when he took the video — but to fans, the symbol stood out because BTS has been using umbrellas as symbolism in their sets for a while now.

Let's go back to 2017. On Aug. 11, 2017, Big Hit Entertainment released a set of Love Yourself posters meant to hint at the group's Love Yourself series. Among those photos was a picture of Jimin holding an umbrella.

On Aug. 18, fans saw the symbol again when Big Hit released BTS' Love Yourself Highlight Reel, which showed Jimin holding an umbrella while in the rain. (You'll see it around the 10:07 mark.)

Fans also saw the umbrella symbol during one of BTS' Wings concert VCRs.

On May 14, 2018, BTS then released a teaser for their upcoming "Fake Love" music video. In the clip, you can see each of the guys with an item in their hand. Jimin had — you guessed it — an umbrella, which fans believe connected to BTS' Love Yourself Highlight Reel and posters.

Then, the umbrella references were at an all-time high once BTS made their comeback with Map of the Soul: Persona and single "Boy With Luv" on April 12, 2019. Fans immediately noticed that the "Boy With Luv" music video was filled with Singin' In The Rain references. (Singin' In The Rain is a really popular movie from 1952, which featured a scene with Gene Kelly singing and dancing in the rain with an umbrella.)

On May 11 and 12, BTS also performed two back-to-back concerts in Chicago, and since it was raining, the group sang Rihanna's "Umbrella" during their concert. Afterward, BTS shared a tweet calling ARMY their "umbrella" and J-Hope even shared a video of himself singing the Rihanna song both on Twitter and during a livestream on VLIVE.

On Aug. 11, BTS performed at the Lotte Duty Free family concert, which was their last concert before they began their vacation. They sang "Boy With Luv," and fans noticed that in the background, you could see umbrellas on the video screen. Since BTS has been referencing the symbol for a while, fans looked up the word "umbrella" and discovered that its Italian origin (ombra) meant "shade," while its Latin origin (umbra) meant "shadow." What makes this discovery really juicy is that fans think "Shadow" is the title of BTS' next album due to a hint in the group's "Persona" music video.

Whew! That brings us to the present. With BTS having made so many umbrella references throughout the years, you can't blame fans for thinking that this symbol has something to do with BTS' next comeback. As to whether "Umbrella" is BTS' next single, fans will just have to wait and see when BTS returns from their hiatus, which will reportedly be sometime in October.

More like this
Will BTS' 2021 Comeback Be At The BBMAs? This Fan Theory Is Pretty Dang Convincing
By Michele Mendez
Here's Why Harry & William Will Not Walk Together At Prince Philip's Funeral
By Brandy Robidoux
Are BTS & Coldplay Collaborating On A Song? Here's Why Fans Think It's Happening
By Michele Mendez
Stay up to date