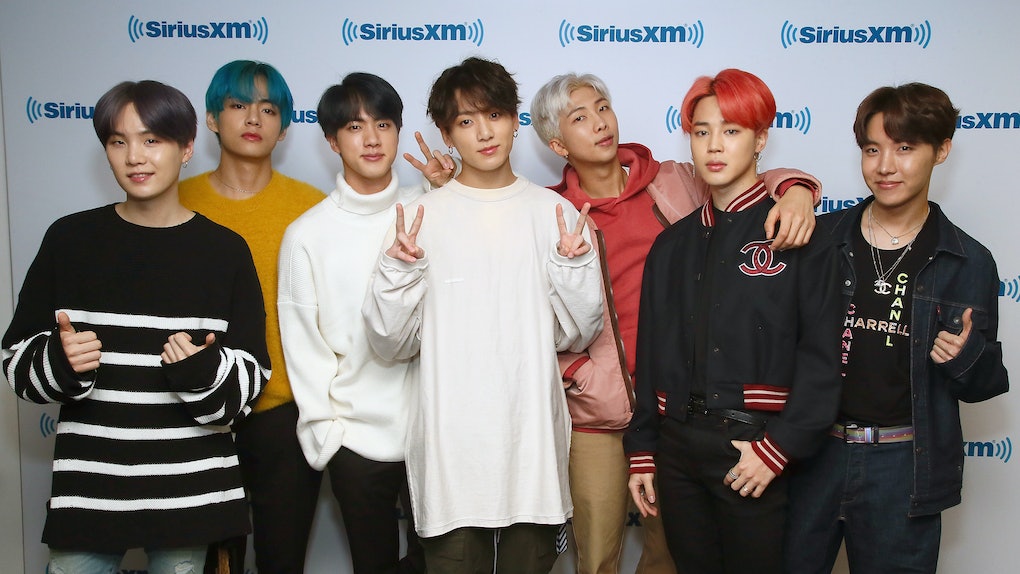 What Will BTS’ Next 'Map Of The Soul' Album Be Called? This Fan Theory Is So Convincing

It's been less than three months since BTS dropped Map of the Soul: Persona, but fans are already hungry for a new album. And even though no official news about the next album has been announced, nothing stops the BTS ARMY from theorizing. Fans have used their detective skills to figure out: What will BTS' next Map of the Soul album be called? Their investigation has yielded a pretty promising theory: Map of the Soul: Shadow.

How did ARMYs reach this conclusion? Grab your magnifying glasses, ARMY — let’s look at the evidence.

The first hint comes from RM's “Persona" music video, Map of the Soul: Persona's intro track. The video, which dropped on March 27, features a chalkboard filled with words and drawings. Considering this is a BTS music video — and the ARMY's first taste of the band's new era — I think it’s safe to assume that a chalkboard is never just a chalkboard.

The words “Map of the Soul” are written multiple times on the chalkboard, which is no surprise. But if you look closer, you’ll see that the words “Persona," "Shadow," and "Ego” are also written there. See below:

BTS is no stranger to the trilogy format. Their previous trilogies include the “School Trilogy," The Most Beautiful Moment in Life, and Love Yourself. So, a Map of the Soul trilogy seems legit.

The "Persona" chalkboard isn’t a fluke, either. It reappeared in BTS' 2019 FESTA photos, with "Persona," "Shadow," and "Ego" still written on it. BTS likely wants ARMY to realize that it's an important part of the story, and not simply a set piece.

But why are these three terms grouped together? Finding the answer to that involves taking a closer look at the inspiration for this era: Murray Stein's book Jung’s Map of the Soul.

The book covers the theories of psychologist Carl Jung. Its chapters are split up into different aspects of the psyche, but Chapter 5, importantly, is titled “The Revealed and the Concealed In Relations with Others (Persona and Shadow).” Similarly, Chapter 1 is called “Surface (Ego-Consciousness),” connecting the last piece of the chalkboard’s puzzle. It makes sense that after showing one part of themselves with Persona, BTS would want to "map out" a different aspect of their souls.

Map of the Soul: Persona was bright and light, both in sound and aesthetic — just watch the “Boy with Luv” music video and you’ll see what I mean. But if Map of the Soul: Shadow is all about what the members conceal from the public, ARMYs think it could be darker.

These theories are only corroborated by BTS' teaser for their upcoming song "Lights," which dropped on June 20. ARMYs once again proved they work faster than the FBI — the darker tone and Suga's absence from the group shot sparked immediate connections to the Shadow theory, and the possibility that Suga might intro the next album.

After this investigative journalism, I'm going to have to go with the ARMY on this one. I'll actually be shocked if we don't hear about Map of the Soul: Shadow and Map of the Soul: Ego sometime soon. Your move, BTS!

More like this
Olivia Rodrigo's Debut Album: Title, Release Date, Music Videos, Tracklist, & More Details
By Michele Mendez
These Tweets About Regé-Jean Page Leaving 'Bridgerton' Are Royal Bummers
By Cianna Garrison
Which Album Will Taylor Swift Re-Release Next? Her Hints Have Fans Shaking
By Brandy Robidoux
Stay up to date