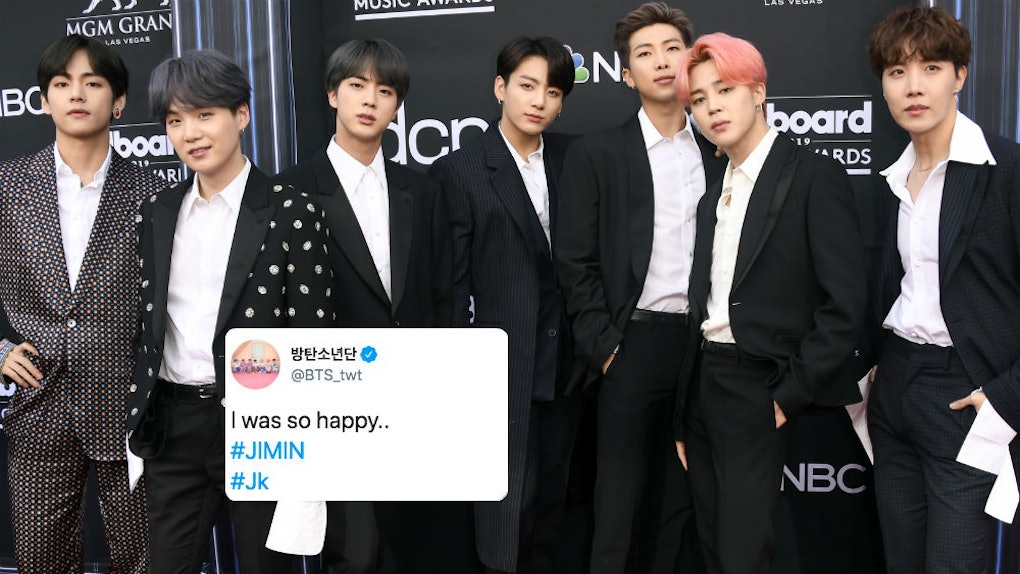 BTS just performed a set of concerts in Chicago, Illinois, and the weather was really bad, to say the least — so bad that fans were wearing ponchos during soundcheck and BTS themselves were splashing around in puddles on stage. But really, what else can you expect from a place nicknamed the Windy City? BTS and their ARMY really went through it together this time, and to show their thanks, the K-Pop group shared some messages for their fans on Twitter. BTS' tweets to ARMYs after their Chicago concerts are so sweet and show just how much the group appreciates their fans, especially when they go to great lengths to see them.

On May 11 and 12, BTS performed two back-to-back concerts at Soldier Field as part of their Love Yourself: Speak Yourself stadium world tour. Unlike their last two shows in LA at the Rose Bowl, their shows in Chicago were not so great in terms of weather, but that didn't stop BTS and ARMY from having the time of their lives. Like all of BTS' shows, the group still performed for just about three hours and they still rocked their choreography (and no one slipped, thankfully). The BTS ARMY also showed up in the thousands (like sixty thousand) to show their support for the group, despite how cold it was outside.

Right after their second Chicago concert, BTS' Suga tweeted his thanks to ARMYs. His message, which is in Korean, translates to "Head home safely and be careful not to catch a cold," according to a translation by fan account @learnkoreanpop.

It seems that the guys were really worried about fans getting sick from being in the rain for so long, because during their first show at Soldier Field, Jimin also told (more like ordered) fans not to catch a cold. To show that he really meant what he said, Jimin shared the same message on Twitter, urging fans to be careful.

Jungkook also posted a video of himself driving around Chicago appreciating the city after the rainfall while listening to "Clouds" by Before You Exit. He didn't say anything in the video, but he waved goodbye to fans and tweeted a simple, "thank u :)."

Next was RM, who posted a minute-long video thanking fans for coming to the show. Being the group's only fluent English speaker, he shared his message in both Korean and English.

I just want to say thank you to all of LA and Chicago ARMYs that have attended our concerts. Today was quite special because it was like raining for the whole day — the whole night — so thank you for bearing the weather and showing us love.

For example, J-Hope wrote, "Thank you for having an amazing time with us even though it was raining. I'm not afraid of the rain any more. Because ARMY, you are my umbrella!!!"

Awww! J-Hope even posted a video of himself listening and dancing along to Rihanna's "Umbrella." I can only imagine the fun sing-alongs Chicago ARMYs had on their way back home after the concerts.

Jimin then posted a video with Jungkook watching the fireworks at the end of their concert while singing along to "Mikrokosmos." They shouted "I love you guys" in unison and ended their video by putting up a finger heart for their fans.

I always thought the guys rushed out of their concerts at the end, but by the looks of it, it seems that they take the time to appreciate the ending fireworks as much as their fans do.

To end the thread of loving messages, V tweeted (in English!) that he would remember their fans in Chicago always and asked fans to take a hot bath before they go to sleep to warm themselves up. V ended the message with a purple heart emoji — BTS' symbol the group uses to show their love for ARMYs.

Honestly, these sweet messages are so full of love I wouldn't be surprised if they warmed Chicago ARMYs right up after the shows!

BTS still has two more stadium concerts in North America before they head off to Europe: May 18 and 19 at MetLife Stadium in New Jersey. Cross your fingers it doesn't rain for either performance!