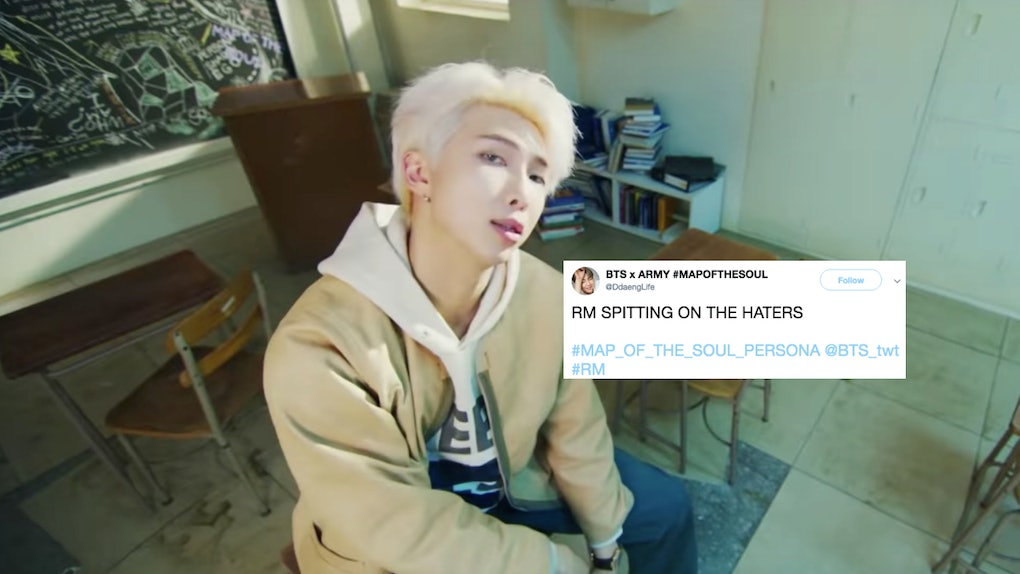 This Video Of BTS' RM's 'Map Of The Soul: Persona' Comeback Trailer Has ARMYs Flipping Out

BTS ARMY, this is not a drill! The group just dropped a trailer for their upcoming album, and the video of BTS' RM's Map Of The Soul: Persona comeback trailer is about to get you so pumped. The trailer, in traditional BTS form, is a full song performed by one of the members. In this case, it's RM's track — aptly called "Persona" — and he raps the entire song.

This song is a trailer for the group's upcoming album, Map Of The Soul: Persona, coming out in April. But make note, new ARMY out there: just because this trailer is a full song and music video does not mean that it's the album's lead single. BTS drops trailers such as this one as teasers for their new music, so this is typical for the group. When Love Yourself: Answer was about to come out, for example, Jin's "Epiphany" music video served as the comeback trailer.

This time, it was RM's turn to kick off the comeback festivities. And oh, what a comeback it is. RM is sitting in a classroom for a lot of the video and the track is sonically rocking BTS' old school hip hop vibes, reminding longtime BTS fans of their 2014 album, Skool Luv Affair.

If this trailer is a hint for the kind of music fans are about to hear on Map Of The Soul: Persona, oh my lord, this is going to be one giant bop of an album.

Look, I'm just gonna say it. This entire video is hot. RM is hot. This is all very hot.

And everyone seems to agree with me, as the album name and Namjoon (RM's real name) are already trending on Twitter, and the video hasn't even been out for an hour.

A press release from BigHit Entertainment (BTS' label) announcing this trailer explains that the trailer is fans' first taste of the music featured on the upcoming album. It also reconfirmed the Map Of The Soul: Persona release date.

Featuring RM, the comeback trailer is the first taste of new music to be taken from the album. Amassing an incredible 2.6 million pre-orders worldwide in just five days, MAP OF THE SOUL: PERSONA is due for release on Friday 12th April via BigHit Entertainment.

The statement closed out by reminding fans that their Love Yourself: Speak Yourself tour isn't even done yet. Yup, BTS is still touring their most recent album, and will continue to do so until June. That means the tour stops following the release of Map Of The Soul: Persona could very well incorporate some of their new music! Fingers crossed for all of you lucky bb's out there who snagged tickets to these extended tour stops.

Following their record-breaking 2018, BTS is set to take the world by storm in May with their extended BTS WORLD TOUR ‘LOVE YOURSELF: SPEAK YOURSELF’ spanning eight stadiums across North and South America, Europe, and Asia. This will include two completely sold out shows at London's Wembley Stadium on 1st and 2nd June.