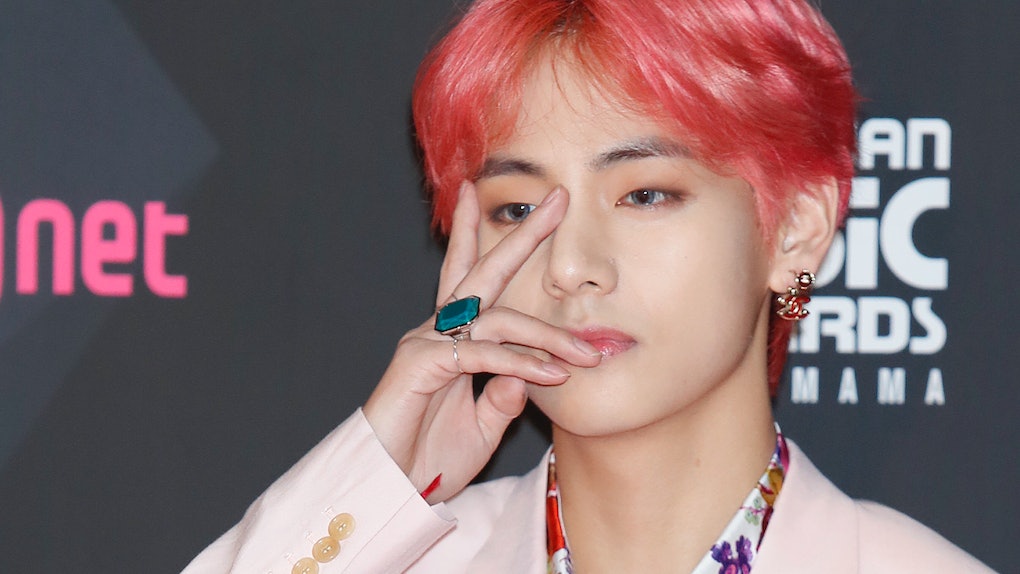 BTS is good at a lot of things. Y'know, stuff like dancing, singing, fashion, breaking hearts, taking names... the usual rockstar stuff. One thing they've mastered is dropping little nuggets of content across the social media universe that consistently tug at their fans' heartstrings. The video of BTS' V singing Bruno Major's "Places We Won't Walk" is the latest and greatest example. It's just a simple little video of V sitting in a car on a rainy day while the melancholy tune plays on, but it makes me feel like I'm in a romantic drama and I like that. ARMYs agree.

The BTS boys are currently on a short break from touring and performing, which means fans have had to get their fix in other ways. Fortunately, J-Hope, Jungkook, Jimin, Jin, RM, V, and Suga haven't let up when it comes to sharing content on their other various social media platforms like Twitter. V's video popped up on BTS' official Twitter account on Tuesday, Aug. 14, and gained over 1 million likes in less than 24 hours. At the time of publication, almost 400,000 people had retweeted it, too.

That's a hell of a lot of people looking at V's face while he chills in the passenger seat of a car, y'know?

Check out the video:

Something about breathy singing and raindrops on a window really puts you in your feelings.

One fan commented, "Taehyung is in a big vacation mood right now," and they're not wrong.

V and his bandmates are currently enjoying a much-deserved break. After BTS' Lotte Duty Free Family Concert performance on Aug. 11, Big Hit Entertainment confirmed rumors that BTS was taking an extended vacation for the first time since their debut, writing:

We would like to announce that for the first time since their debut, BTS will be going on an official and extended period of rest and relaxation ... This period of rest will be an opportunity for the members of BTS, who have relentless (sic) driven themselves toward their goal since their debut, to recharge and prepare to present themselves anew as musicians and creators. This will also provide them with a chance to enjoy the ordinary lives of young people in their 20s, albeit briefly. During this time, the members will rest and recharge in their own personal ways ... BTS will return refreshed and recharged to return all the love you have and continue to show them. Thank you.

Frankly, the boys really, really deserve it. They have had the pedal to the idol-metal for a long, long time, jumping from their Love Yourself concerts that ran from August 2018 to April 2019 right into their Love Yourself: Speak Yourself stadium tour that spanned May 2019 to July 2019.

Assuming you made it this far in this article, then you surely must know that when they boys perform on stage they hold nothing back. While I totally have my own conspiracy theories that they are actually robot/demigod superstars and don't need normal things us mortals do like food and sleep, anyone would need a little R&R after all of that.

It's unclear when, exactly, the boys will return from their break, but it probably won't be more than two months. When they do return, I assume it will be with the strength of billions of ARMYs. In the meantime, fans are keeping up with BTS' day-to-day by devouring Bangtan Bombs, interacting on Weverse, refreshing their VLIVE videos, and, of course, following the boys on Twitter.

More where this came from, please, V! ARMYs will take whatever you've got.