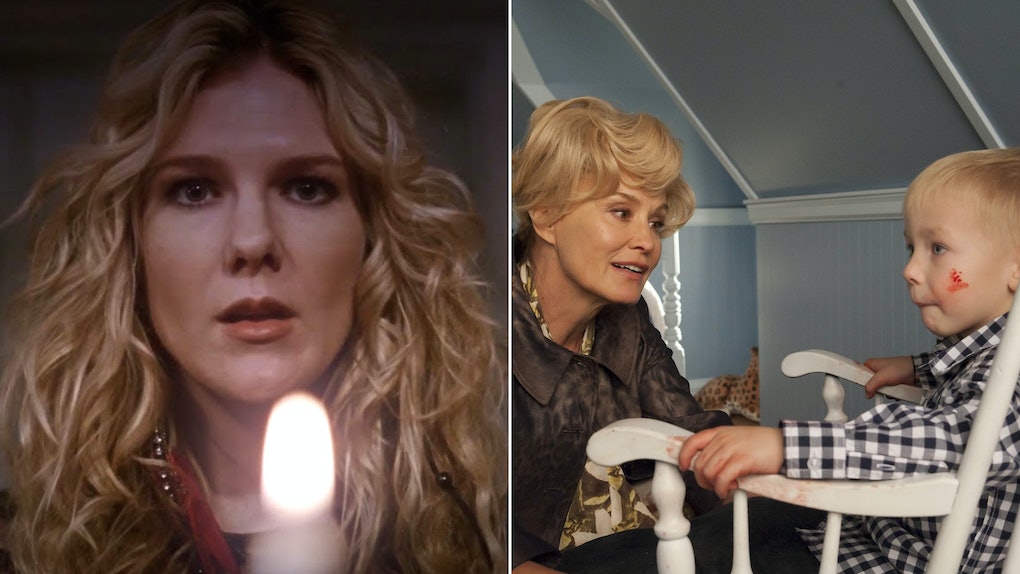 Although we are only a few episodes into American Horror Story: Apocalypse, fans are already trying to figure out what course this twisted new season might take. With witches, ghosts, robots, mutants, and an antichrist all running around a nuclear wasteland, pretty much anything seems possible, but there is one new theory that seems to convincingly connect everything. This AHS: Apocalypse time travel theory connects Coven and Murder House perfectly, and could very well be where this season is headed in a couple of episodes. Let's dive into it!

Spoiler alert: This post contains plot details from the first three episodes of American Horror Story: Apocalypse. With the Coven witches having just arrived at Outpost 3, fans are all wondering exactly how the witches and Michael Langdon will face off as the show continues. And the source for all things AHS spoilers, teasers, and theories is none other than Ryan Murphy's Instagram. The AHS showrunner constantly posts cryptic photos of scenes and characters that have not yet appeared in the season, which fuels most of the fan theories that arise about the show. And a new fan theory brilliantly connects a bunch of Murphy's recent Instagram posts, making a case for how Michael Langdon will die, then be brought back to life, and then lead to a trip back in time.

The new theory comes from Reddit user RomanoffWidow, who pieced it all together after it was revealed that Episode 7 will be entitled "Traitor." According to the theory, that traitor will be Misty Day.

As many fans have already theorized, it looks like Michael Langdon will be visiting all of the dead witches in their personal hells. We already got a peek at Langdon visiting Madison Montgomery and possibly Queenie as well, and we have seen Myrtle Snow is alive again, but what about Misty Day? One of the most devastating moments of Coven was finding out that Misty ended up trapped in her personal hell of perpetually dissecting frogs forever, so will we finally see her break free like her sisters?

Well, the theory is that first, Cordelia Goode, Madison, and Myrtle — along with the seemingly new witches Coco St. Pierre Vanderbilt, Dinah Stevens, and Mallory — will defeat Michael Langdon and burn him at the stake. That would explain the photo that Ryan Murphy posted of the coven dressed up in their funeral attire:

Then, the coven will all return to Miss Robichaux's Academy for a feast, which explains the photo Murphy posted of all the witches around a dinner table:

It is at that dinner where Misty Day will finally make her Apocalypse debut (she is confirmed to appear on this season but has yet to show up in any of Murphy's teaser photos). The theory is that the now-deceased Michael will visit Misty in her personal hell and save her in exchange for her using her power of resurgence to bring him back to life. Obviously, Misty would probably do anything to not dissect another frog, and she would not know who Michael really is anyway if she was trapped in hell this whole time.

So Misty will resurrect Michael, but then of course, Michael will turn around and kill the Supreme, Cordelia, and probably Misty, too, so that she cannot be brought back. This would explain Ryan Murphy's photo of blood on the dinner plate.

So, what's left after all that? Due to the prominence of hourglasses in the trailers, teasers, and promo art for Apocalypse, many fans are assuming that time travel will play a major role in this season. In terms of this theory, after Michael kills Misty and Cordelia, the remaining witches could then find some way to travel back to the time period of Murder House, when Michael was just born, and find some way to stop him.

Phew! Yeah, that was a lot, but knowing this show, it might just be twisted enough to actually happen. American Horror Story: Apocalypse airs Wednesday nights on FX.