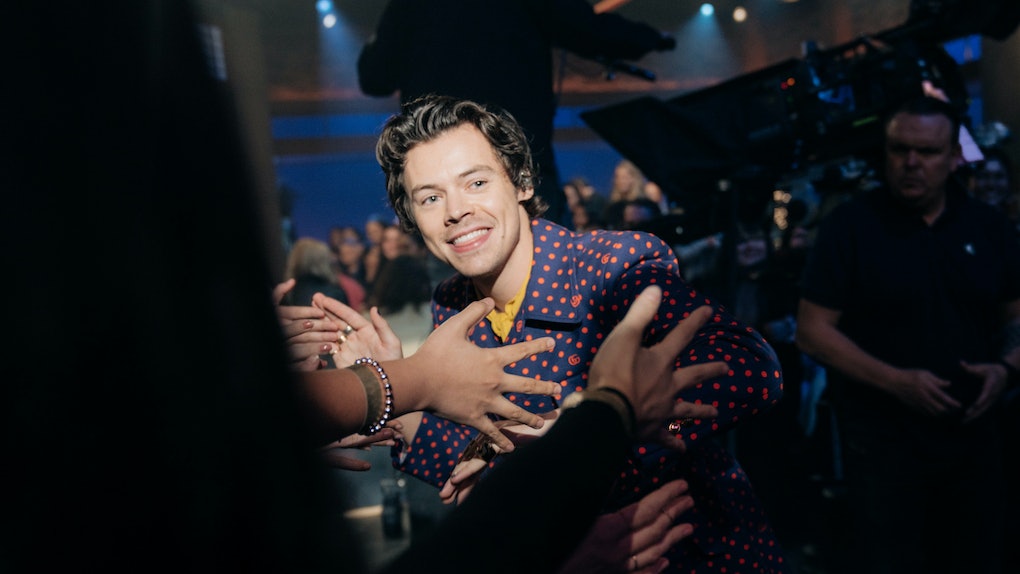 If you're looking for the tea on Harry Styles' past relationships, look no further than his new album, Fine Line. It's packed with references about one of his exes, and tell the story of romance and, ultimately, heartbreak. The lyrics about Harry Styles' ex Camille Rowe are so emotional.

Styles released Fine Line on Dec. 13, two years after he dropped his self-titled debut album on May 12, 2017. For the past few months, Styles has been teasing Fine Line by sharing a few singles, including "Lights Up," "Watermelon Sugar," and, most recently, "Adore You."

Previously, Styles told Rolling Stone his new album was "all about having sex and feeling sad," and, well, he wasn't wrong. While his singles didn't allude much to his romantic past, the rest of his Fine Line tracks truly do have so many lyrics about Styles' exes. And while he never drops any names in his songs, most of the lyrics seem to be about one person in particular.

Over the years, the "Lights Up" singer has been linked to Taylor Swift, Kendall Jenner, Camille Rowe, Tess Ward, and more, but in Fine Line, it seems to be all about his most recent ex, Rowe, who he split with in July 2018.

This track sets the tone for the rest of the album: heartbreak. The lyrics show how Styles seemingly thinks his lover was too good for him, and when they broke up, he was left feeling devastated.

I know you were way too bright for me/ I'm hopeless, broken, so you wait for me in the sky/ Brown my skin just right/ You're so golden

"Adore You" is all about Styles feeling intense feelings of love, so much so that he would do anything for his lover.

Oh, honey/ I'd walk through fire for you/ Just let me adore you/ Like it's the only thing I'll ever do

While he is head over heels for them, he admits the other person may not feel the same way.

You don't have to say you love me/ I just wanna tell you somethin'/ Lately, you've been on my mind

Out of all the songs on Fine Line, "Cherry" is the most telling. It's the song that's almost definitely about Rowe, because of the song's nod to her French roots (and a literal voicemail from her being featured at the end of the track).

To start off, the song is about Styles feeling jealous that his ex has seemingly moved on from him.

Styles then reveals he misses his ex's "accent," possibly a nod to Rowe's French accent.

I, I just miss/ I just miss your accent and your friends/ Did you know I still talk to them?

The song ends with the snippet from a voicemail of a woman speaking French. According to a translation by CapitalFM, the voicemail translates to the following:

Speaking to Apple Music's Zane Lowe in November, Styles talked about his decision to add the voicemail to "Cherry," and all but confirmed it was Rowe.

"It got added in later on, and it felt so part of the song," Styles said. "It just felt like it needed it. We're friends and stuff, so I asked her if it was OK. And she was OK with it."

This track is about the aftermath of a difficult breakup. Styles recalls laying in bed and missing his lover being right next to him. He also admits the downfall of the relationship was all his fault.

I'm in my bed/ And you're not here/ And there's no one to blame but the drink in my wandering hands/ Forget what I said/ It's not what I meant/ And I can't take it back, I can't unpack the baggage you left

That line about having "the drink in his wandering hands" to blame may even allude to Styles having cheated on whoever the song is about, according to fans. Styles' team did not respond to Elite Daily's request for comment on the lyrics.

He then reveals a lot of his love songs are actually about one person in particular.

You said you care, and you missed me too/ And I'm well aware I write too many songs about you

"To Be So Lonely"

In "To Be So Lonely," Styles says he and his ex are trying to be friends, but it's hard for him to get over her.

Considering Styles admitted he's still friends with Rowe, this line could totally be about her.

Later in the song, Styles says he hopes his ex can forgive him for what he did.

I just hope you see me in a little better light/ Do you think it’s easy being of the jealous kind?/ ’Cause I miss the shape of your lips/ Your wit, it's just a trick/ This is it, so I’m sorry

In this song, Styles sings about constantly traveling around the world, but his true home is wherever his lover is at, which is so romantic.

Staring at the ceiling, two weeks and I'll be home/ Carry the feeling, through Paris, all through Rome/ And I'm still thinking back to the time under the canyon moon

If these songs really are all about Rowe, she must have been truly amazing for Styles to write so many lyrics about her. Get in your feels by listening to Fine Line below.

More like this
Who Is Billie Eilish's "Your Power" About? The Lyrics Call Out A Manipulative Ex
By Sydney N. Sweeney and Brandy Robidoux
RM & eAeon's "Don't" Lyrics In English Are An Emotional Rollercoaster Ride
By Michele Mendez
Here's How Meghan, Harry, & Archie Reportedly Spent Mother's Day 2021
By Brandy Robidoux
Stay up to date