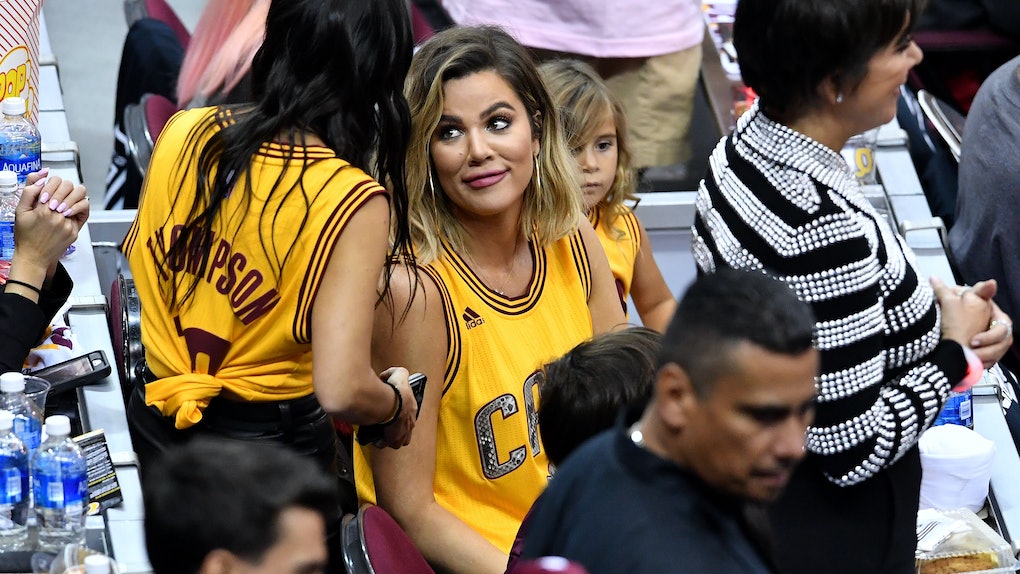 If you have been waiting for visual confirmation that Khloé Kardashian actually has a bun in the oven, this might be it. The new Keeping Up With The Kardashians mid-season promo looks like it almost certainly shows Kardashian announcing big news to her family, and everyone freaks the F out. I'm freaking the F out, and I know deep in my heart this rumor is definitely true.

EARLIER: The mid-season finale will air this Sunday, Dec. 17, at 9 p.m. on E!, and the teaser for it is totally wild. The footage shows the family touching on Rob Kardashian's custody battle, Kendall Jenner's struggle with anxiety, Kylie Jenner maybe arresting somebody, and Khloé making a huge announcement at a party.

Watch the video and you tell us if she's pregnant or not.

If you want my professional opinion, it's Kris Jenner's honest shock and reaction that makes me believe this moment must be the big reveal. After all that woman has seen, I don't know what other news could evoke such genuine surprise from her.

Plus, everyone is crying happy tears.

After a rough 2016 and Kim's Paris robbery, this family could use a dose of happy news. And truly, everyone seems to be in a way better place than they were this time last year.

Kim and Kanye have a third baby on the way, Kourtney is smitten with her new boyfriend Younes Bendjima, Kendall was just announced as the highest paid model this year, Kylie reportedly also has a baby on the way with Travis Scott, and I'll be damned if Khloé isn't actually expecting with boyfriend, Tristan Thompson.

What a difference a year makes, eh?

For Khloé, the pregnancy rumors began swirling at the end of September 2017. At the same time, reports broke that little sister Kylie was also expecting. And of course, this was all going on when Kim revealed she and her hubby Kanye are expecting a baby girl via surrogate.

It's been a perfect storm of Kardashian babies, and we're all one Kendall Jenner pregnancy rumor away from losing it entirely.

A source told People magazine, "Getting pregnant at the same time was totally unplanned but they are really happy about it." And very recently, Kris Jenner was caught saying something similar.

In the holiday episode of KUWTK, a weepy Jenner told her daughters, "I used to pray that one of you guys would have a baby, and now it's like a faucet that we turned on that won't turn off."

Literally, what more proof do we need?

Kardashian has also candidly said she and Thompson are planning on having a big family. In a past episode of Keeping Up With The Kardashians, she said,

It looks like that big step led to, ya know, a baby.

It's been so real watching this family go through ups and downs over the past decade, and I'm weirdly the most invested in their 2018.

In my dream world, all of the Kardashian/Jenner offspring have their own spinoff called The Kardashian Kids, and my future daughter will truly know the meaning of contour, too.

Tune in for all new episodes of Keeping Up With The Kardashians beginning Sunday, Jan. 7, and don't miss this mid-season finale at 9 p.m. on Sunday, Dec. 17, on E!.