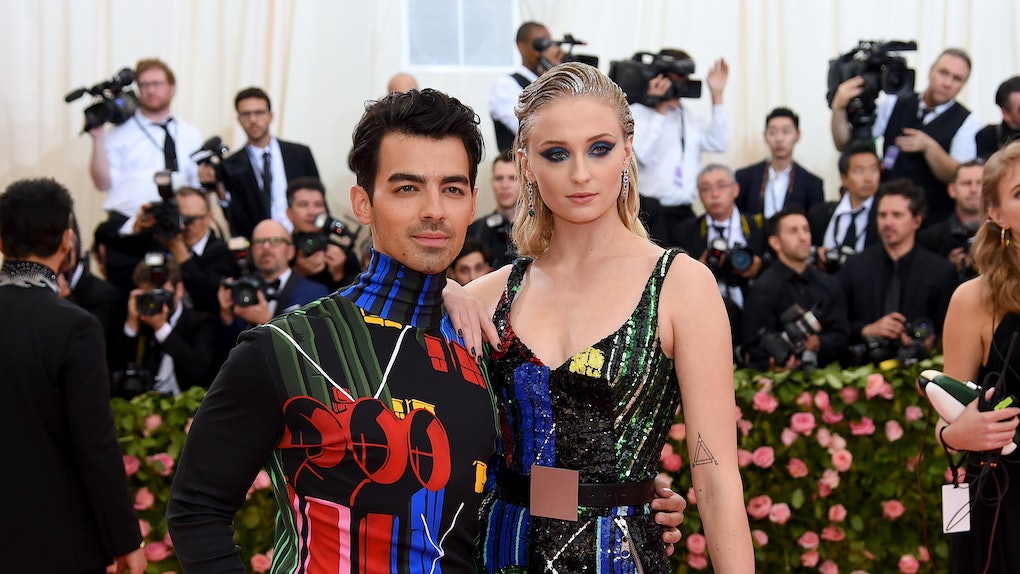 ICYMI, Sophie Turner and Joe Jonas officially tied the knot in a Las Vegas wedding chapel on May 1 after the Billboard Music Awards. Less than a week later, Jophie made their debut as a married couple at the 2019 Met Gala in stunning, matching Louis Vuitton ensembles, and let me tell you, they looked absolutely amazing. In a pre-Met Gala interview for Louis Vuitton, Sophie Turner joked about her new name after marrying Joe Jonas, and it's so great and so Turner, considering she jokes around a lot.

"So, I know a lot of people have been waiting to find out my new name, my name reveal, and so I am really excited to be able to share it with you guys now," she began. "My new name is Sophie Vuitton. Sansa Fierce. Sophie Ghesquière. Louis Turner." When asked how she would define "Camp," the Met Gala 2019 theme, Turner answered in the least serious and yet still most iconic way possible. "Camp is hard to define," she started. "Let me give you an example of camp. I think camp is getting married in Vegas, last minute after the Billboard Music Awards. That would be fun. I’d like to try that," Turner said, in reference to her own spontaneous wedding at Chapel L'Amour inside A Little White Wedding Chapel. "That's camp," she concluded with a wink.

While Turner and Jonas' Las Vegas wedding may have seemed a little out there to some people, according to Priyanka Chopra Jonas, it's so them. "That was so fun," she said in an interview with Access. "It was so fun! And it’s so Jophie, I call them Jophie. It’s like, trust them to do that. That is Jophie! And they’re going to have this amazing, beautiful [second] wedding, obviously. Sh*t. Was I not supposed to say that?" Well, there's the confirmation I so desperately, needed. Anyway, Chopra Jonas gave fans a more detailed look at Turner and Jonas' surprise Vegas wedding and now, I'm extra sad I wasn't invited.

"We were like, randomly inviting our friends, like people that we met," Chopra Jonas continued. "We were like, 'Alright, we're going to set up this wedding now, we're going to the chapel right from here, and please arrive, please arrive.' So, we had Diplo, Khalid, they were really sweet, they arrived. Diplo Instagram Lived the whole thing, it was awesome. It was so funny! I mean, we were driving around this pink Hummer limo. I was outside the window. It was just epic. I had that long hair extensions that I thought was going to fly out of the window. It was that kind of night — a Jophie kind of night." And honestly, the whole thing sounds so incredible.

Turner may be joking about her name change now, but Entertainment Tonight reportedly obtained Turner and Jonas' marriage certificate, which reportedly shows that Turner made "Jonas" her official last name. Elite Daily previously reached out to Turner's team for confirmation of Turner's name change, but did not hear back. I guess "Congratulations" are in order. It's very nice to meet you, Sophie Vuitton, Sansa Fierce, Sophie Ghesquière, Louis Turner, Sophie Belinda Jonas!