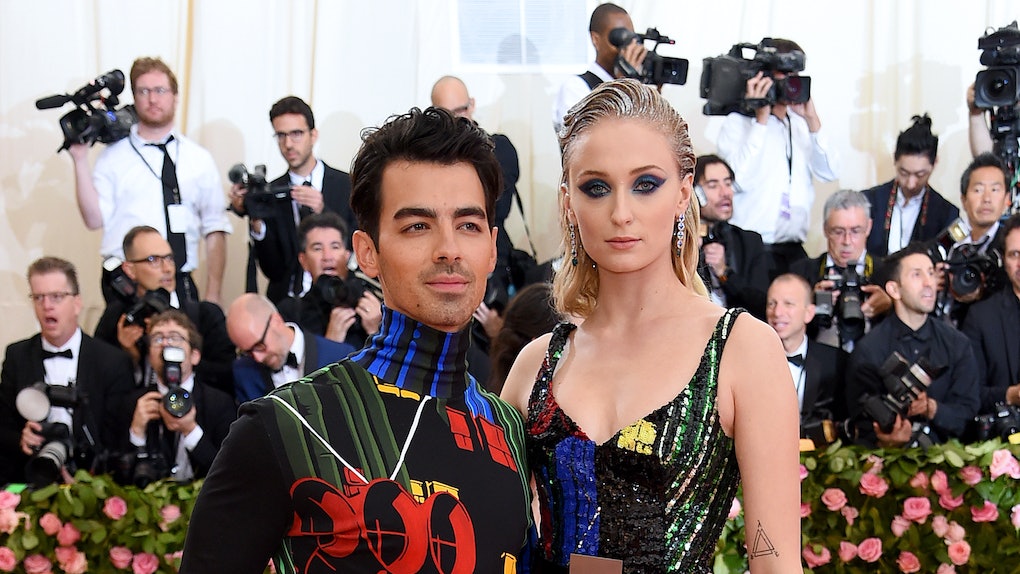 Less a week after they tied the knot on May 1 in Las Vegas, Joe Jonas and Sophie Turner made their first official public appearance as man and wife at the Met Gala. And Joe Jonas and Sophie Turner's Met Gala 2019 body language says a lot about their dynamic as newlyweds. Traci Brown, body language expert and author of Persuasion Point, digs deep into three super telling pictures of Turner and Jonas rocking the pink carpet.

But before we get into all of those deets, let me give a little refresher to anyone who hasn't been necessarily keeping up with Turner and Jonas' nuptials. The couple was in Las Vegas on May 1 because the Jonas Brothers were set to perform their new hit single, "Sucker," at the Billboard Music Awards. Jonas performed alongside his brothers and obviously rocked the house and then, because the thrill of performing in front of thousands apparently wasn't enough, decided to head over to the Chapel L'Amour inside A Little White Wedding Chapel where he went ahead and legally wed his fiancée, Turner. The ceremony had an Elvis impersonator as an officiant, Diplo as a cinematographer (AKA he filmed it on his iPhone and livestreamed it on Instagram), Khalid, and the two remaining Jo Bros as groomsmen. Oh, and, in case you were wondering, you can now buy the ring pop wrapper from the ring pop Jonas gave Turner during the ceremony on eBay for thousands of dollars.

For those of you who were hoping for a more swanky wedding for Jonas and Turner, don't worry. The two are reportedly still going to have another ceremony in France this summer. “They had to get married in the States to make it legal, but the wedding is still in Europe,” a source told People on May 2, 2019.

OK, now that you officially know everything there is to know about their marital status, let's dish about their body language.

They both hate being there in, like, a cute, we're-in-this-together way.

OK, so the two are pretty miserable. But at least they're both miserable.

"They don’t appear to be enjoying the moment," says Brown. "But at least they’re doing it together. They’re matching that un-entertained look."

And don't get it twisted. Just because they're miserable, doesn't mean Jonas doesn't still have Turner's back.

"His arm is tight around her," explains Brown. "Their feet are pointing slightly towards each other. So I’d say they’re a good couple."

In fact, Brown adds that being miserable on the red carpet is a pretty common trait for a Jo Bro. "I’ve never seen any of the Jonas brothers look remotely happy at all in a red carpet situation so these two are on track," she says. If anything, it's cute that this particular Jonas was able to find a partner who shares his discomfort at red carpet events.

They've still got a basis of friendship.

Their faces are essentially the same here as they are in every other picture of them from the pink carpet this night. But what's interesting about this picture is Turner's hand placement. "She’s got her hand on his shoulder which is more of a friend move than romantic," says Brown.

In this picture that looks almost exactly like all of the others, Brown points our attention to their feet. Their feet are "just barely pointed to each other" which means that their focus is completely on each other, while they avoid the crowd with the rest of their bodies.

"They have an amazing amount of consistency through the evening," says Brown. "I doubt they really want to be there."

Honestly, I think it's so cute that they don't want to be there together. Ah, so in sync.

More like this
Why Did Jennifer Lopez & Alex Rodriguez Break Up? She Dropped A Hint On Instagram
By Candice Jalili
Zoë Kravitz's Instagram With Taylour Paige Shows Them Looking So Happy Together
By Candice Jalili
Travis Barker's Birthday Instagram For Kourtney Kardashian Was So Extra
By Lydia Wang
Stay up to date