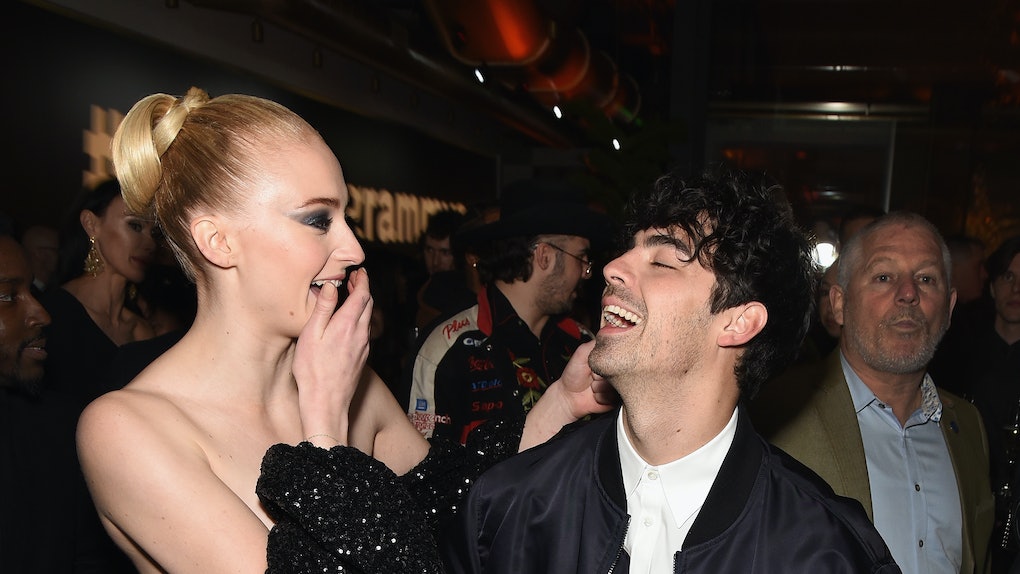 Not even a week after they tied the knot in Las Vegas on May 1, someone has put the Ring Pop wrapper from Joe Jonas and Sophie Turner's wedding up for sale on eBay. The wrapper from the cherry-flavored Ring Pop that Jonas gave Turner during their Las Vegas nuptials is now for sale on eBay for what I'm going to go ahead and guess is more than their entire ceremony cost. The bid for the ring is at $4,050 as of May 6 and will likely only go up by the time it closes on May 13. The person putting the wrapper up for auction posted the listing with this absolutely epic descriptor:

Slightly used on the happiest day or Joe's life. May 1st 2019 in Las Vegas Nevada This is the original candy wrapper which held the wedding ring that Joe gave to Sophi[e]...is 100 legit and you get a copy of the discovery finding the wrapper if you are the lucky bidder...A great gift for the Jonas Brothers fanatic the has everything...There is only ONE of these in the world so bid now.

Oh, and if your pure, unadulterated love of Turner and Jonas wasn't enough to convince you to go ahead and place a bid on the ring, the poster has another selling point that your third grade self would go nuts over. "Whom ever wins this auction is able to receive the title.....from the Book of World Records as the 'Highest Price Ever Paid for a Candy Wrapper' if the winner choses to," the person auctioning off the ring wrote on May 4.

Yes, that's right. Not only would you be winning a pivotal piece of foil from the most important day of the life of a Jo Bro, but you'd also be getting a spot in the Book of World Records, so, yeah, I think it's safe to say that any early 2000s kids would call this an unparalleled dream come true.

I know, I know, I know. It's just a piece of trash. And, yes, I also was surprised to find that the Book of World Records is still a thing. But, if you have a few thousand dollars to spare, why not make all of your wildest childhood dreams come true in one fell swoop? OMG, and can you imagine what a great Tinder bio "I hold the world record for highest price ever paid for a candy wrapper" would be?!

OK, I swear I'm in no way profiting from the sale of this wrapper. I'm just, like, apparently super enthusiastic about it.

For those of you who weren't following along on Jonas and Turner's big day, let me give you a little bit of a refresher. On May 1, Jonas and Turner were in Las Vegas, Nevada for the Billboard Music Awards where Jonas performed "Sucker" on stage alongside his brothers. After the awards show, Turner and Jonas, who had been engaged for two years at the time, headed to Chapel L'Amour inside the famous A Little White Wedding Chapel to tie the knot. Luckily for fans, Diplo was there to film the entire thing and livestream it on Instagram. According to his story, Dan + Shay performed, Khalid was a guest, they had an Elvis impersonator as an officiant and, of course, Turner and Jonas looked super in love.