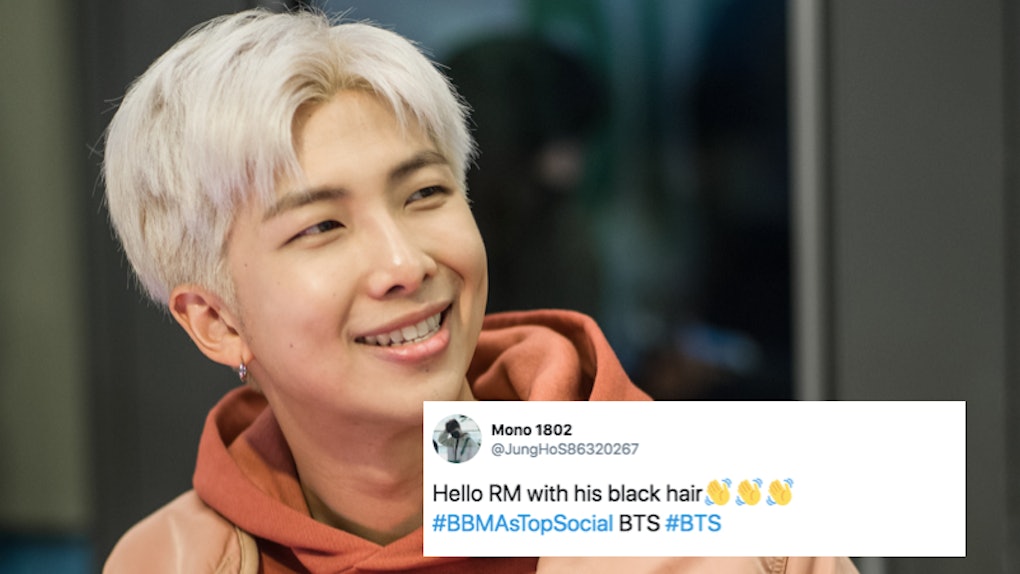 If I had a penny for every time the BTS boys changed their hair color, I'd be a millionaire by now. No, seriously, it feels like every time I get online, either RM, Jin, Suga, J-Hope, Jimin, V or Jungkook has a new 'do, making it very hard to keep track of who is rocking what color at any given moment. The most recent hair color change comes from BTS group leader Namjoon, also known by his stage name RM, and it's already a huge hit. RM from BTS' new black hair at SBS Inkigayo Super Concert has ARMYs swooning hard, and I honestly don't blame them.

On Sunday, April 28, RM debuted his new black hair at annual an K-Pop music festival called Inkigayo Super Concert. The previously blonde beauty was sporting sharp, jet black hair on stage while performing "Boy With Luv" with his fellow K-Pop kings. According to Korean pop culture website Soompi, BTS won first place at Inkigayo with a perfect score of 11,000 points and I'm not saying RM's new, chic black hair helped the group get a perfect score but, OK... I kind of am saying that.

Anyway, if you're tired of listening to me swoon over RM's new hair and just want to see it for yourself, the wait is officially over. Check out the K-Pop stars new 'do, and prepare to be blown away.

Unsurprisingly, BTS fans and RM stans are going wild over this look, which starkly contrasts the blonde RM had been sporting for some time now. Twitter user @beemyhope_ excitedly noted, "NAMJOON HAS BLACK HAIR????? IS BTS GONNA BACK TO DARK HAIR AGAIN????? IM GONNA DIE," most likely referring to V's recent switch to black hair too. Twitter user @dailyggukks tweeted what we're all feeling writing, "I WONT STOP TALKING ABOUT NAMJOON AND HIS BLACK HAIR ALL DAY TODAY!!!! THIS FINE FINE MAN WHY AM I ALWAYS A MESS WHEN IT COMES TO HAIR???" Same, @dailyggukks, same.

TBH, it looks like this drastic hair switch has ARMYs falling in love with RM all over again.

RM's 2019 journey with blonde hair started back in January when the singer appeared to have a blue and blonde 'do. Fans had mixed reactions to the multicolored hairstyle, but it wasn't long before the singer switched things up again. By the end of January, RM had a new hair look. While this one wasn't multicolored per se, it did have fans a bit confused and trying to determine if the color was grey or green. By March, the singer had an icy grey color and it wasn't long until RM went full-on blonde. When the video trailer for BTS' Map Of The Soul: Persona featuring RM came out, the K-Pop singer sported a platinum blonde 'do, leaving no more room for confusion about the color. His hair was also blonde in the music videos for "Boy With Luv" and "Army With Luv," as well as various performances on music shows after the release of BTS' latest album.

Even though RM's powerful blonde era has come to an end, it's clear ARMYs are loving his darker 'do.